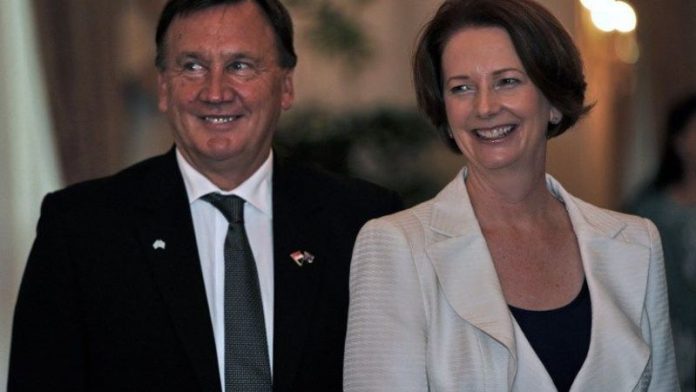 Gillard has now defeated Rudd for the leadership three times, but faces the prospect of trying to unify a deeply divided party and then turning around opinion polls which show her government will be easily defeated in the general election.

"I think they're terminal. There is no way out of this," political analyst Nick Economou told Reuters, adding the leadership tension reinforced perceptions that the conservative opposition would easily win the election.

Gillard's leadership has been under threat for most of the past two years as her minority government lumbered from one crisis to another, despite an economy which avoided recession after the 2008 global crisis and which has seen 21 years of continuous growth.

Gillard, Australia's first female prime minister, replaced Rudd in a party coup in June 2010. The dumping of Rudd, an elected prime minister, angered many voters who have never forgiven Gillard for the way she became leader.

Gillard defeated Rudd a second time in a leadership vote in February 2012, prompting Rudd to promise at the time that he would not challenge and would only take on the leadership again with the overwhelming support of his party.

Rudd said on Thursday he did not have the numbers to win a comprehensive victory over Gillard.

"I'm here to inform you those circumstances do not exist," Rudd said.

Gillard has failed to arrest a slump in opinion polls, which predict a major defeat in September with Labor losing about 20 seats in the 150-seat parliament. Despite the years of economic growth, Gillard's government has failed to win over voters who believe her economic management is flawed.

There is very little difference in economic policies between the government and conservative opposition. But opposition leader Tony Abbott has promised to scrap a 30% tax on coal and iron ore mine profits, and to scrap an unpopular tax on carbon, if his party wins power.

Financial markets had little reaction to the leadership rumblings. The Australian dollar was a shade firmer on the day thanks mainly to a surprisingly strong reading of manufacturing from China, Australia's biggest export market.

The currency was at $1.0380 and holding in a very tight range. Government bonds hardly budged, with investors assuming future borrowing needs would be much the same whichever leader or party was in power. – Reuters

Australia PM Julia Gillard: It will be easier for the next woman

DJ suspended for asking if Aussie PM’s boyfriend is gay