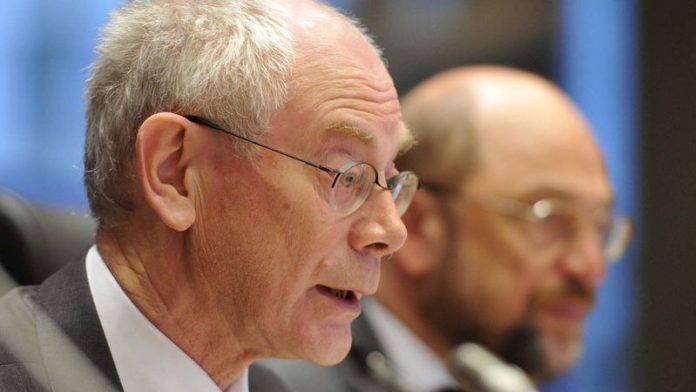 The summit was cancelled because of the mounting debt crisis in bankruptcy-threatened Cyprus.

"It is with regret that we have decided to postpone next week's EU-Japan summit," EU Council and Commission heads Herman Van Rompuy and Jose Manuel Barroso said in a surprise statement late Friday.

"The ongoing efforts to find a solution for the financial situation of Cyprus require our presence in Brussels," the pair said, as three separate sources confirmed the staging of a face-to-face meeting of eurozone finance ministers from 5pm on Sunday in Brussels.

"We reiterate the importance of EU-Japan strategic relations and would like to thank Prime Minister (Shinzo) Abe for expressing his understanding."

"We look forward to the rescheduling of the summit at the earliest possible opportunity," they added.

In Tokyo, a Japanese foreign ministry official said: "The postponement was unfortunate but we understand the situation. We hope the two will make an effort to stabilise Europe's financial system."

The EU office in Tokyo said De Gucht was expected to go ahead with his planned events, including a meeting with Foreign Minister Fumio Kishida, but it was uncertain if he would act for the EU leaders to launch the trade talks.

The EU is feverishly trying to broker bilateral trading agreements with its major global rivals and leading world economies the US and Japan, but the threat of default and eurozone expulsion for Cyprus has raised the spectre of major contagion across financial markets. – Sapa-AFP