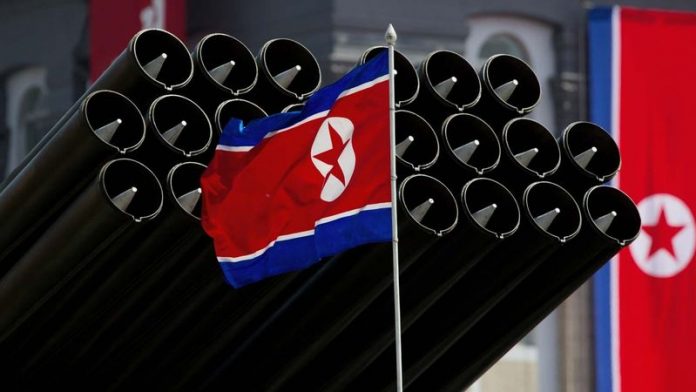 This, after the United States flew two nuclear-capable stealth bombers over the Korean peninsula in a rare show of force.

North Korean leader Kim Jong-un signed off on the order at a midnight meeting on Friday of top generals and "judged the time has come to settle accounts with the US imperialists in view of the prevailing situation", the official KCNA news agency said.

The North has an arsenal of Soviet-era short-range Scud missiles that can hit South Korea and have been proven, but its longer-range Nodong and Musudan missiles that could in theory hit US Pacific bases are untested.

On Thursday, the United States flew two radar-evading B-2 Spirit bombers on practice runs over South Korea, responding to a series of North Korean threats. They flew from the United States and back in what appeared to be the first exercise of its kind, designed to show America's ability to conduct long-range, precision strikes "quickly and at will", the US military said.

The news of Kim's response was unusually swift. "He finally signed the plan on technical preparations of strategic rockets of the KPA [Korean People's Army], ordering them to be on standby for fire so that they may strike any time the US mainland, its military bases in the operational theaters in the Pacific, including Hawaii and Guam, and those in South Korea," KCNA said.

South Korea's Yonhap news agency reported there had been additional troop and vehicle movements at the North's mid- and long-range missile sites, indicating they may be ready to fire. "Sharply increased movements of vehicles and soldiers have been detected recently at North Korea's mid and long-range missile sites," Yonhap quoted a South Korean military source as saying.

It was impossible to verify the report which did not specify a time frame, although South Korea's defense ministry said on Friday that it was watching shorter-range Scud missile sites closes as well as Nodong and Musudan missile batteries.

The North has launched a daily barrage of threats since early this month when the United States and the South, allies in the 1950-53 Korean War, began routine military drills. The South and the United States have said the drills are purely defensive in nature and that no incident has taken place in the decades they have been conducted in various forms.

The United States also flew B-52 bombers over South Korea earlier this week. The North has put its military on highest readiness to fight what it says are hostile forces conducting war drills. Its young leader has previously given "final orders" for its military to wage revolutionary war with the South.

Economic zone
Despite the tide of hostile rhetoric from Pyongyang, it has kept open a joint economic zone with the South which generates $2-billion a year in trade, money the impoverished state can ill-afford to lose.

Pyongyang has also cancelled an armistice agreement with the United States that ended the Korean War and cut all communications hotlines with US forces, the United Nations and South Korea.

"The North Koreans have to understand that what they're doing is very dangerous," US defense secretary Chuck Hagel told reporters at the Pentagon on Thursday. "We must make clear that these provocations by the North are taken by us very seriously and we'll respond to that."

The US military said that its B-2 bombers had flown more than 10 461 km to stage a trial bombing raid from their bases in Missouri as part of the Foal Eagle war drills being held with South Korea. The bombers dropped inert munitions on the Jik Do Range, in South Korea, and then returned to the continental United States in a single, continuous mission, the military said.

Victor Cha, a North Korea expert at the Centre for Strategic and International Studies, said the drill fitted within the context of ramped-up efforts by the Pentagon to deter the North from acting upon any of its threats. Asked whether he thought the latest moves could further aggravate tensions on the peninsula, Cha, a former White House official, said: "I don't think the situation can get any more aggravated than it already is."

South Korea denied suggestions on Friday that the bomber drills contained an implicit threat of attack on the North. "There is no entity on the earth who will strike an attack on North Korea or expressed their wishes to do so," a spokesperson for the South's Unification Ministry said.

Despite the shrill rhetoric from Pyongyang, few believe North Korea, formally known as the Democratic People's Republic of Korea, will risk starting a full-out war.

Still, Hagel, who on March 15 announced he was bolstering missile defenses over the growing North Korea threat, said all of the provocations by the North had to be taken seriously. "Their very provocative actions and belligerent tone, it has ratcheted up the danger and we have to understand that reality," Hagel said, renewing a warning that the US military was ready for "any eventuality" on the peninsula.

North Korea conducted a third nuclear weapons test in February in breach of UN sanctions and despite warnings from China, its one major diplomatic ally. – Reuters

As China aims for ‘world-class army’, Asia starts to worry