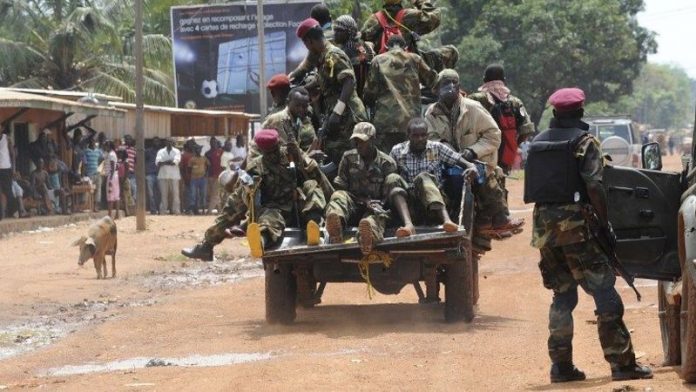 The convoy of 40 men, led by Colonel Djouma Narkoyo, left the capital Bangui for Mbaiki, about 80km to the south, with a mission to find out what was going on in the region, where abuses were still being committed against civilians and where troops of the regular army Faca were scattered in the bush.

At Pissa, about 50km from the capital, the convoy stops. Local residents run away, wary of the armed men who toppled François Bozizé on March 24 after an offensive that began in December.

The rebels call them back. Colonel "Johnson", named for a one-time rebel leader in Liberia with whom he bears a passing resemblance, hands out money to children. He is swiftly surrounded by about 100 people calling out "Seleka, Seleka!" and hoping to be given some cash.

"This is my family," Johnson says. "Here it is neither the government nor the state, but me who gives."

About 10km further on, we arrive at Berengo, site of a former palace of Jean-Bédel Bokassa, the man who took power in a coup in 1966 and proclaimed himself emperor a decade later, only to be ousted in 1979. The palace became a barracks, deserted today. The Seleka troops deploy on foot, because routed Faca forces have been seen in the area in the past few days.

"In his era, there was no democracy, but there was no unrest," Narkoyo says of Bokassa. "Everything that was built in Bangui dates from his days."

'Waiting for change'
School head Lazare Abrouandji welcomes the rebels. "We are happy. Before, this was a dictatorship. We have been waiting for change for a long time."

On arrival in Mbaiki, the rebels leap out of their vehicles, which are parked outside houses made of clay and wood, with sheet-metal roofs.

"This town has around 30 000 people, but scarcely 5 000 are left," schoolteacher Jean Herbert says. "The others are hiding out in the bush, waiting for the end of the troubles. Some have small babies. The town is regularly looted. We're frightened."

Asked who carried out the pillage, several people profess ignorance, but once the rebels are out of earshot, two or three people blame them. "It's the Seleka. They say that this is a Bozizé stronghold, that we have never been affected by uprisings, that it is our turn," one resident says.

The rebels drive into town as far as the market. Both service stations have been looted, along with the hospital, the police station and several private homes. On the main street, a crowd gathers, Muslims lining one side of the road, Christians the other.

On some points, witnesses agree. They say that last Sunday, part of Bozizé's family, including two of his sons, went by in a convoy of about 30 cars. Bozizé​ himself fled to Cameroon, while much of his family went to the Democratic Republic of Congo.

Stories of looting
Residents also blame Faca troops for looting the two service stations and say that one soldier was killed.

Each community has stories of looting, borne out by several witnesses.

Among Muslims, Bozizé's men are blamed. "They have intelligence agents. When night falls, they come and they steal," says a diamond cutter. "They came into my house. I fled by a back door. They took all the stones. I lost $19 500."

Christians accuse the Seleka of looting and other abuses. "They kidnapped the son of the second deputy [mayor] and demanded a ransom of two million [CFA francs]. The man paid up and his son was returned," one resident says.

"The Seleka patrol by day but by night they come back to loot. They select the houses," adds another.

Colonel Narkoyo wants to win people round and ceaselessly explains: "I lost four people close to me killed by the Bozizé regime. But if I want to settle my scores, with whom am I going to rebuild the Central African Republic? We need to put a stop to the looting and restore confidence." – AFP