Hurricanes pounce ahead in Super 15 victory 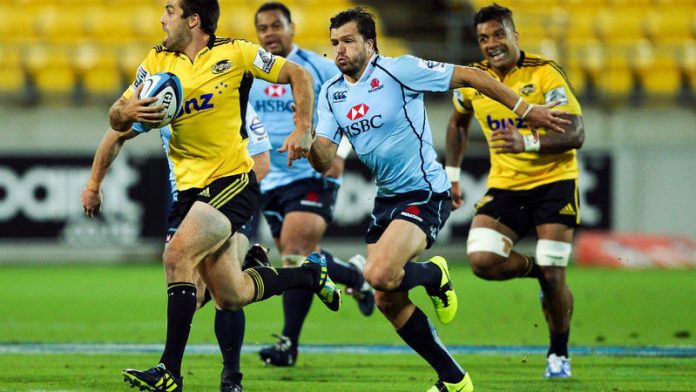 At half-time a bonus point seemed out of the question as a lack of discipline by both sides saw rival kickers Beauden Barrett and Brendan McKibbin dominating the scoreboard.

But after the resumption of play, the game burst open as the Hurricanes pounced on turnover ball to punish the Waratahs with three quick tries to take a commanding lead.

The Waratahs recovered to bag two tries of their own but were denied a fourth try and the prospect of two bonus points when Michael Hooper was forced out in the corner on full-time.

It was the fourth consecutive win for the Conrad Smith-led Hurricanes and propelled them from ninth to fifth on the congested ladder while the Waratahs remain in 10th place.

Game changing
Smith said the game-changing first 15 minutes of the second half was the clinical performance his side had been threatening to produce all season.

"We've got plenty of fire power to take those opportunities and it just meant we racked up points pretty quick. We probably sat on it a little and softened up at the end and let them in for a bit more than we would have liked," he said.

Waratahs skipper Dave Dennis blamed the high turnover rate after the break for his side falling off the pace.

"That's what's been killing us all season. We gave them too much ball in our half and it hurt us. They scored two or three quick tries in the second half and it's hard to come back."

There were only two tries in the first half, one apiece, as neither side was able to asset any dominance.

The Waratahs replied when a TJ Perenara clearing kick landed in the arms of fly-half Brendan Foley who weaved his way 40 metres to the line leaving a trail of defenders sprawled behind him.

South African-born prop Reggie Goodes scored first after the break when he reached behind him to gather in a misdirected Smith pass and galloped 20 metres to the line.

A Barrett chip kick put hooker Motu Matu'u in for a try and then Savea deftly caught a deft fly kick to score his second try and the Hurricane's fourth.

Adam Ashley Cooper and Israel Folau both scored late tries for the Waratahs but their desperate bid to claim a bonus point ended with a diving Hooper forced into touch. – Sapa-AFP