Hear it roar … and drool 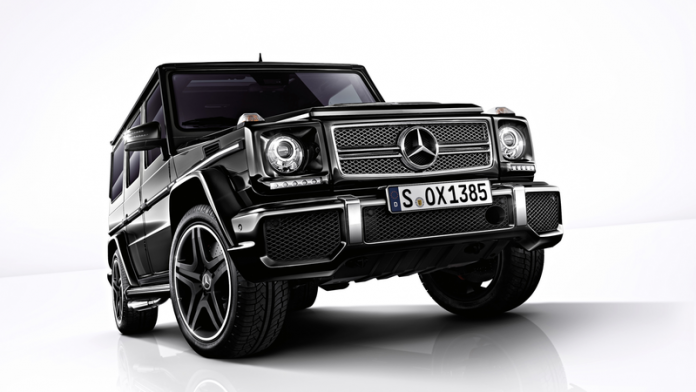 There are not many comparisons to be made between Arnold Schwarzenegger and the Mercedes-Benz G-Class — both natives of Graz, Austria — which are not entirely cheesy.

The one significant similarity is the way both the G-Class and the philandering bodybuilder/actor/businessman/politician have remained mostly unchanged over the years.

The Governator is as incomprehensible now as he was when he first took up acting in the 1970s and the current G-Class looks very similar to the original G-Class, which was produced in 1979. Thankfully, that is it for the comparisons.

I am tempted to say that you should think of the Gelandewagen (cross-country vehicle) as a German Hummer, but I do not think the Hummer could ever be as upmarket as the G-Class, especially not now that the Hummer brand is owned by a Chinese manufacturer of heavy construction equipment.

Nevertheless, they were both designed to be all-conquering military vehicles that have morphed into being mass-produced for executives and celebrities desperate to boost their street cred.

The G-Class, and specifically the G63 AMG I recently tested, is unlike anything you have ever driven.

The height, width and length of the G-Class speak volumes of its intent to do grievous bodily harm to anything that crosses its path.

Endearingly authentic
Its rugged exterior does not attempt to be easy on the eyes or even aerodynamic in any way. It is a hunk of expensive metal and no time has been wasted to make it pretty. That alone makes it endearingly authentic. While so many SUVs are rounded, bulbous and futuristically designed, the G-Class is stoically unconcerned about aesthetics and soft lines.

I can almost picture it saying (in Arnie's heavy teutonic accent, of course): "You want pretty? I don't do pretty. You want fancy? Get an SUV, I'm a 4×4. You want door handles that don't break your thumbs, you lily-livered, namby-pamby chicken? Aargh, where's my bazooka?"

So let us start with those door handles. They could be painful, but they were not for me because I am not one of those strange women with long fingernails, so the old-school handles were just fine. As were the heavy doors, which have to be slammed shut with a fair amount of force, and the door locks, which make a very loud, clanking sound as they lock automatically when the car reaches 20km/h.

There is a full-length side-entry step to help you get into the very tall G63 and when you are inside, the rather heady price tag of R2-million starts to make sense: this is where life gets uber-comfy.

You can toast or cool your buns front and rear with heated and cooled leather seats that are electrically adjustable. In-car entertainment is taken care of with three crystal-clear screens, two of which are attached to the rear of the front seat headrests. The exquisite Harman Kardon sound system proved perfect for Gang of Instrumentals.

"Have you noticed how gangsterish Suks's music taste is getting the longer she drives this car?" said one friend to another as I was forced to ferry friends, colleagues and hangers-on to just about anywhere. The song playing was Money with lyrics along the lines of "money, money, money, in a rich man's world, in a rich man's world". The irony was not lost on the poor journalists in the big-ticket behemoth.

The G63 I was driving did look and feel very gangsterish. The black paint job, black alloys, headlight grilles and low-profile 20-inch tyres all combined into one arrestingly head-turning vehicle.

People just could not help themselves. They stopped and gawked. Some drooled, some took photos of the car, some asked me to take photos of them in front of the car.

And some looked at it with barely hidden hate: "How dare you drive a car that's better than mine?"

I must be driving in Jozi's northern suburbs where one's success is measured by the girth of one's German SUV.

If the G63's imposing looks were not making the green-eyed monster even greener, the engine sound almost made other drivers spontaneously combust with SUV envy.

OMG is what the twitterati might say. At which point, I would be forced to say: "That would be AMG, twerp."

Think of that scene from the Lion King where the hyenas are talking about Mufasa and the one says, "ooh, say it again" and when the name is repeated, it elicits a pleasurable wriggle from the silly scavenger.

The G63 AMG growled the word "Mufasa" every time I started it or tramped the accelerator. And no, I did not stop wriggling for a long time. Well, not until I realised how thirsty this beastly car is. I averaged close to 19 litres per 100km, but it is worth mentioning that I did not do much long-distance driving and I was a little guilty of some, erm, spirited driving.

On the road, visibility is amazing because you are quite high up, but the position of the spare wheel on the rear-most door obscures what you see in the rearview mirror. Yes, there is a rear camera, but it is only activated when the car is in reverse gear.

The drive is not as soft or comfy as the equivalent ML63 AMG and the road-holding does suffer a little because of the significant ride height. At this point, it is worth reminding you, dear reader, that the G-Class tries quite determinedly not to be a soft-roader SUV and, although the G63 AMG is quite at home on tar, it does have three fully locking differentials. In other words, it is a proper 4×4.

Ultimately, although I was thoroughly impressed by the G63 AMG, I am feeling slightly ambivalent about it.

Anything with an AMG engine needs to handle the speed derived from such a formidable power plant. The ML63 AMG does not handle like a sports car, but it does have exceptional road-holding and does a damn fine job of keeping the wheels on the tar at speed.

The G63 AMG feels almost like an American muscle car — great in a straight line, but not so great in bends.

I know that a G-Class should not have to care about bends because that is not what it is built for and in any other G-Class model, I would not care about the body roll in twisty sections. But this car wears that lofty AMG badge that we are so very fond of and, this time, I wonder if it should.

Having said that, I must add that a certain Mail & Guardian executive who drives a Porsche Cayenne was desperate for a ride in the G63 and my aunt, who drives a Range Rover Sport, was suddenly wondering about the trade-in value of her car after spending an inordinate amount of time sizing up the G63 AMG.

The battle of the big vans