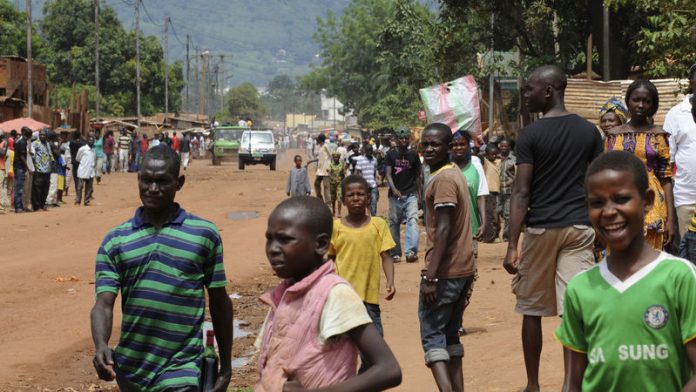 Souleymane Diabate, the head of the United Nations Children's Fund (Unicef) office, shakes his head as he considers the obstacles preventing his organisation and its partners from getting food to people who have nothing to eat. The crisis is on several levels, he tells the Mail & Guardian.

"Our warehouses in Bangui and Kaga Bandoro were looted and we can't bring in new supplies until we know it's safe to do so." The problem isn't a lack of food and medical supplies – 30 tonnes of material, packed in shipping containers and ready for rapid deployment is sitting at United Nations facilities in neighbouring countries. Planes are on standby to take the containers to where they are needed but the order to take off will not be given until there is some form of assurance that Seleka rebels and other armed groups around the CAR will not steal the material or attack the people on the ground who receive it.

There are no solid guarantees that humanitarian supplies will ever reach their intended destination for their intended use, however Unicef and its partners, like other humanitarian players in the field, do what they can to reduce the risks of failure when working in conflict and post-conflict zones. An evaluation team is due to report back today on whether the distribution of food and medicine can go ahead in certain areas.

Unicef in CAR is facing two particularly complicated issues related to its mandate on children – that of child soldiers as well as the issue of unaccompanied children who have been separated from their parents as a result of the crisis. In a country where good governance tends only to be a slogan rather than a policy, it wasn't surprising when the new communications minister in the Seleka government told the M&G that any problem surrounding child soldiers would be sorted out by Unicef. Asked why Seleka had armed children among the ranks of its military, the minister claimed that children had not been forced to join the rebellion, rather, he says, they had "volunteered". Hearing this, Diabate rolls his eyes towards the sky in disbelief.

Seleka is not the only armed force in the CAR which has minors in its ranks. During a visit to Birao in the remote north-east of the CAR five years ago, this correspondent witnessed officers in ousted president François Bozizé's national army, the Faca, training children as young as 10 years old.

Easy prey
​Unaccompanied children are essentially children who are left wandering the streets on their own with no means of support because, during the mayhem of fighting, such as the fall of Bangui last month, parents fled the area without their families. These innocent victims are easy prey for any rebel group looking to add to its ranks young children who are used as sex slaves, combatants and labourers.

Chances are many of the parents are among the estimated 37 000 refugees Unicef says fled the CAR to neighbouring states at the height of the most recent battles. The UN's refugee agency, UNHCR, has a long history of working on such crises in the region, with emergency situations in Chad, the two Congos, the two Sudans and the CAR itself requiring outside help for persons displaced by conflict on numerous occasions over the past several decades.

Humanitarian agencies adhere to the principle of "do no harm" and it is vital to attempt to forge good relations with whoever is in power during a crisis. Negotiations between Unicef and Seleka began almost as soon as the rebels entered Bangui. What seems to frustrate Diabate most is the fact that these crises happen with such regularity. There's an acute emergency in the CAR on a regular basis, and there's a military coup in the CAR virtually every decade. Each time, everything that civil society, humanitarian agencies and their partners have managed to build up – infrastructure, personnel, collective memory, processes – is broken down and they are forced to start over again.

Adding to the frustration Diabate points out an often overlooked fact: "In this country, it's almost always the same people involved in the destruction, and sadly, chances are, before this emergency has been sorted out, the international community will once again have forgotten the Central African Republic."