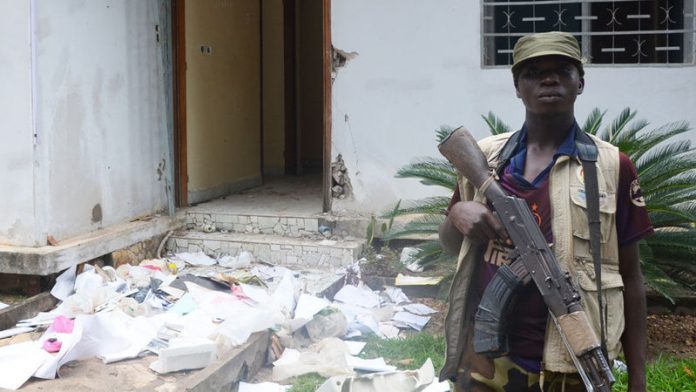 At the house in Sassara, on the outskirts of the capital Bangui, Colonel Ali Garba – one of the Seleka rebels whose coalition toppled Bozizé from power last month – gave a tour.

"The Monday [after the assault] I returned to pick up two vehicles … The house had been looted," he said.

"The people were probably hoping to find diamonds or gold stashed away. They lifted up two tiles in the garage and discovered the two skeletons."

He indicated the spot where the bodies were found, at the back of the garage, stowed in 2m-deep recesses underneath square tiles.

All that now remains in the space is a scrap of coloured fabric.

"I saw them. They were bones with no flesh. The people had been dead for a while, at least several months, maybe more," he Garba said.

According to Garba, the house was already pillaged by the time the rebels took Bangui in a swift assault on March 24.

When he scoured the completely ransacked house, Garba said he also found the dead body of a presidential guard, apparently killed during clashes between Bozizé's supporters and rebels.

Authorities regretted their removal
"The Red Cross collected the body of the guard and the skeletons," Garba said, a claim backed up by near neighbours.

The Red Cross could not however be contacted to find out where the skeletons were taken.

A government source who did not want to give his name said authorities regretted their removal and were keen to find and identify the bodies.

Who the two dead were and how they met their fate at the property – one of several owned by Bozizé – remains a mystery.

Some wonder if they were opponents to Bozizé's regime, killed and hidden under the floor in the hope they would never been unearthed.

"Perhaps it was a ritual," suggested one of the rebels.

Witchcraft
Ritual killings are a known phenomenon in Central Africa, designed to empower or bring good fortune to whoever orders the murder. Bones belonging to those killed are sometimes also trafficked for use in witchcraft.

It was Monique Bozizé, wife of the ex-president, who supposedly lived in the house.

Now it lies unoccupied and almost completely bare, all the furniture having been snatched, save one fitness machine. Even the toilets were pulled out.

Covering the floor were discarded documents, rubbish and photos, some of which feature François Bozizé, others depicting traditional ceremonies or boxing tournaments.

At the back of the house, an electric generator was smashed into pieces, while more papers littered the garden.

Bozizé is there outside – or rather an effigy of him, with his face painted onto a "body" made up of his real clothes.

One rebel pulled on his tie as if to strangle the former leader, who ruled Central African Republic for a decade but fled to Cameroon as the rebels advanced. He is now expected to seek asylum in Benin. – AFP