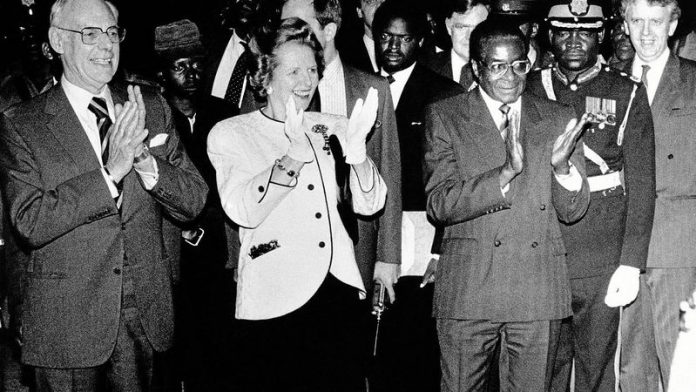 Zanu-PF's warm words for Margaret Thatcher would appear surprising for a party she once described as containing "terrorists".

But it shows the old guard's respect for her role in Zimbabwe's transition to independence – and also its nostalgia for the Thatcher years, when it enjoyed the affections of the West.

To Zanu-PF, there are two distinct eras in its relations with Britain; before and after Tony Blair. The first was one of warm relations – state visits and tea at Downing Street – whereas the other has been one of spite and sanctions.

President Robert Mugabe, himself a model of old-school conservatism, still sees better chances of mending relations with Britain under the Conservatives.

In an interview with the Zimbabwe Broadcasting Corporation in 2010, Mugabe said: "We have always related better with the British through the Conservatives than Labour. Conservatives are bold. [Tony] Blair and [Gordon] Brown run away when they see me."

Despite changes of leadership in the Conservative party, Mugabe still believes they have a better appreciation than Labour of the history of British colonialism, and its impact on former colonies such as Zimbabwe. A letter by Clare Short, Blair's international development secretary, renouncing all British responsibilities to the land question in Zimbabwe is frequently quoted by Zanu-PF as an example of how Labour is to blame for the breakdown in relations.

Zim and the West
For Zanu-PF, Thatcher is a throw-back to a time when they had access to Britain and Europe, and none of the close scrutiny and animosity of the current regimes there.

"We met at a conference of parliamentary associations in London, and I thought she was a very likeable person," said Zanu-PF secretary for administration Didymus Mutasa, who was speaker of Zimbabwe's Parliament during the Thatcher years.

Thatcher pledged to meet the cost of land reform at Lancaster House in 1979, in exchange for a tough concession from the nationalists; there would be no forced takeovers of farms for 10 years.

What followed were years of warm relations with Western nations. In 1982, Mugabe made his first official visit as Zimbabwe prime minister to Britain and seven other European countries, a privilege that he no longer enjoys.

Thatcher visited Zimbabwe in 1989, praising the land resettlement scheme funded by her government as "extremely good in every way".

In March 2004, a coup plot in Equatorial Guinea threatened to shake Mugabe's respect for Thatcher. Zimbabwean officials arrested 70 men at Harare International Airport over arms and immigration charges. It turned out the men, led by Simon Mann, were mercenaries on a mission to overthrow the government of Teodoro Obiang Nguema.

Mark Thatcher, son of the former British prime minister, was arrested and charged with funding the plot. Mann was later handed over to Obiang – he was flown to Guinea under cover of darkness despite court action by his lawyer.

It emerged that Mark Thatcher already had interests in Zimbabwe: he had been co-owner of a gold mine in the country, an interest he later sold, and also imported diesel from South Africa.

But it seemed none of this diluted Zanu-PF's view of Margaret Thatcher. Mugabe and Thatcher appeared to have built a bond strong enough to withstand the mercenary controversy.

According to author Richard Dowden, Mugabe once called on Thatcher at Downing Street while visiting London with his late wife, Sally. "He asked if he could come to visit Mrs Thatcher. She agreed, and on a Sunday evening at Downing Street the two sat and talked ­informally about the world and like old friends – she sipping whisky, and he water. It was not the only time that happened."

Secret letters made public in 2009, however, showed Thatcher had not always seen Mugabe as the "friendly and open" gentleman she later described him as.

Not talking to terrorists
In 1979, Thatcher barred her envoy Lord Harlech from meeting Mugabe, vowing she would not talk to terrorists. Britain was at the time weighing support for Abel Muzorewa, who had become leader of "Zimbabwe-Rhodesia" after a discredited internal settlement reached with Ian Smith. A foreign office official had suggested in a letter to Thatcher that Baron Carrington "considers that the emissary should offer to meet the co-leaders of the Patriotic Front".

Thatcher responded, in underlined notes on top of that letter: "No – please do not meet leaders of the 'Patriotic Front'. I have never done business with terrorists until they become Prime Ministers! MT". Carrington persuaded Thatcher that backing Muzorewa would be seen internationally as "a device to perpetuate the white man's rule behind an amenable and unrepresentative black front".

At a Commonwealth meeting in Lusaka in 1979, Thatcher was ­persuaded to host a new round of negotiations at Lancaster House. It was a tough task; Smith was ­digging in, and Zanu-PF was sure it was ­winning the war, having declared 1979 "Gore Gukurahundi/The Year of the Storm".

"Firm hand"
Thatcher's "firm hand was felt throughout the negotiations", says Simba Makoni, who was Zanu-PF's representative in Europe during the struggle. The early years of a free Zimbabwe were marked by good relations with the West – so good that allies turned a blind eye to rights abuses. It all ended when Zimbabwe began ­taking land from white farmers, with Blair and Europe responding with sanctions.

Since then, Zanu-PF measures all British leaders against Blair. Years after he left power, Blair's name is still frequently flogged by Zanu-PF. Zanu-PF chairperson Simon Khaya Moyo said: "At least Thatcher showed [more] maturity and direction while in power than Blair."

In a recent interview, Mugabe described how, even when there was disagreement, "we shook hands with Thatcher. Blair would not do that".