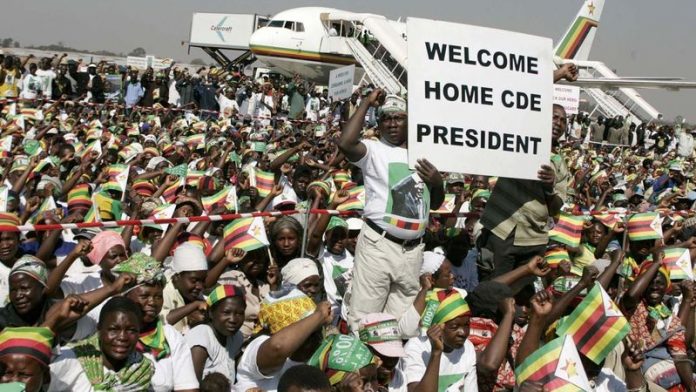 Slightly more than a year ago, a Zanu-PF report called for curbs on social media to stop the "bombardment" against it.

Last week, presumably after much deliberation in the Politburo on the 14th floor of the party's headquarters, the party finally discovered Twitter and Facebook.

Zanu-PF is desperate to reach the youth, which is a tough job when you are led by an 89-year-old and if the head of your youth wing is Absolom Sikhosana, a man believed to be in his 60s.

Zanu-PF has never liked technology. The party is currently on a crusade to ban shortwave radios and there has been much grey hair loss in the Politburo about cellphones "fitted with GPS functionality". One report in state media suggested it was a "military-style function". The party says the radios spew hate speech about President Robert Mugabe.

Previous attempts to appeal to young voters have included appearances by Mugabe in music videos and even naming a fashion label, Gushungo, after Mugabe's totem.

Naming and shaming the MDC
Now, according to a younger member of the party's information department, Zanu-PF is "going all out" on the internet. Psychology Maziwisa, who is Zanu-PF deputy director for information, said "this would be an election like no other" and Zanu-PF is "going all out and we would particularly like the young generation who are the most active on social media to take charge of this election".

Long used to controlling media, Zanu-PF has been annoyed by the social media and in 2011 a Bulawayo resident, Vikas Mavhudzi, was arrested for trying to "subvert a constitutional government" for suggesting on Facebook that the protests that ousted Egypt's Hosni Mubarak showed a "unity of purpose worth emulating".

But Zanu-PF has perhaps realised it cannot control the internet and so it is joining it. And there is no question of the party resisting the urge to shovel the dirt. It will talk about "some of the biggest scandals of our time", such as "Mr [Morgan] Tsvangirai's shameful personal scandals".

Without a hint of irony from a party that has been power for 33 years, Maziwisa said Zanu-PF would also debate how the Movement for Democratic Change had failed to "create a single job in the four years they have been in government".

A day after the European Union lifted sanctions on most party officials, a Zanu-PF account, @ZANUPF_Official, announced its arrival with this tweet: "An assault against President Mugabe is an assault against the whole of Zimbabwe. Sanctions must go entirely and unconditionally".

Zanu-PF's arrival on Twitter confused some users who had thought an existing unofficial account was legitimate. The fake account, @zanu_pf, has stacked up more than 8 000 followers, with tweets ranging from tantrums about "white idiots" and prayers for "the starving children in the West" to threatening to kill dogs to retaliate against pet-loving Europeans.

Understanding vaccine hesitancy is important, but it is vital that we go about it in the right way