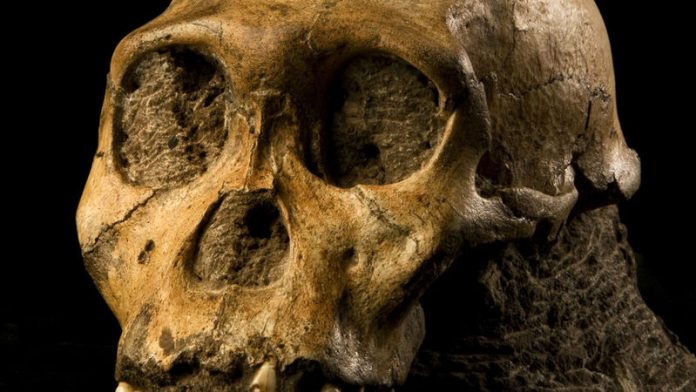 The two fossils are some of the most preserved specimens ever studied, and were found in 2008 by Professor Lee Berger, of the Evolutionary Sciences Institute at Witwatersrand University. The discovery came after he looked at the Cradle of Humankind complex on Google Maps and then walked the area, finding over 300 new caves.

The two individuals are thought to have died from hunger or injury after falling into a deep cave. Their bodies were then washed into an underground lake, where they became preserved.

The speed of the process ensured that they were well preserved, and the Malapa site has the remains of over 300 early humans and other animals that have since gone extinct.

The link to water led their distinct genus to be named Australopithecus sediba. Sebida is SeSotho for spring.

After the find, the two fossils were spread between 16 institutions around the world. The findings were published on Friday in six studies in the journal Nature.

The younger skeleton was a 10-year old male, and the older one is thought to be in her late 20s. The distinction was made because the male had a heavier muscle mass, and the female appeared to have the damage from giving birth.

The fact that the two skeletons were of different ages allowed the team to see how they grew. And the way they grew led the team to decide that they were a different genus than the africanus which came a million years later – whose most famous skeleton, Lucy, was also found in the same area.

Ancestor of modern humans
“This marks Australopithecus sediba as a transitional form, which is exactly what would be predicted on Darwin’s theory of evolution by natural selection,” said Professor Joel Irish, one of the research team.

“The changes taking place in the skull and skeleton of these individuals are exactly those changes that ultimately lead to us humans,” he said.

This means that sediba could be an ancestor of modern humans, he said. But they also do not have characteristics that our genus, Homo, has. They had small brains, small bodies and long arms, like the earlier Australopiths.

Their skull and pelvis were however advanced, and the structure of their hands is much more like ours. Berger said the debate is still happening to decide whether they are an ancestor of modern humans, or a whole new branch of the evolutionary tree that then died off.

Their status as a transition species between those living in trees and modern humans is apparent in this wide range of characteristics. Their finger bones were curved, meaning that they regularly climbed trees. But their feet were adapted to walking upright, although they did not have a heel. Each footstep had to land on the outside of the foot  and then roll onto the other side – much like modern humans who hyperpronate.

And they could not run very well, with the swinging arm motion that modern humans have when they run. Their rib cage was narrower at the top because their arms were focused on grabbing trees above their heads, this stopped them swinging by their side.

“This would not have prevented them from running, but it does suggest that they were not capable of long-distance, endurance running,” said Dr Peter Schmid, another researcher.

A hundred researchers are currently pouring over the rest of the Malapa site, in what is one of the world’s largest archaeological and paleontological digs, said Professor Berger.

Johannes Phokela is on the comeback trail

Tiny dinosaur with big eyes and ‘ears’ hunted in the dark