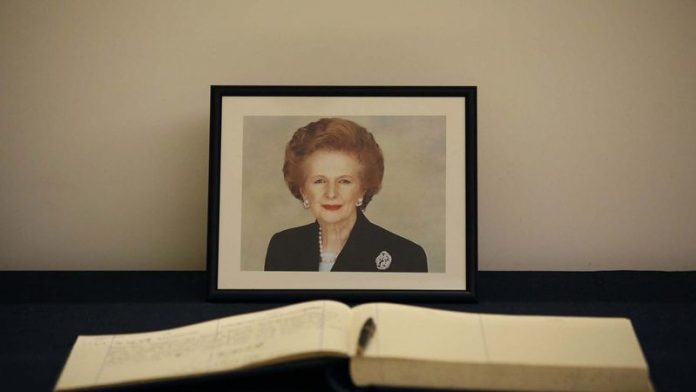 After a life in politics, now comes the politics of death. Underneath the protestations of decorum, the insistence that now is not the time for such things, that our thoughts should only be of condolence and tribute, something intensely political is under way: a society wrestling over the memory of its most towering recent figure. And, make no mistake, this debate over how to remember Margaret Thatcher – whether on the streets, on Twitter or at Wednesday's funeral – is not about the past. It is a contest over Britain's present and future.

Politics infuses every aspect of it. In the absence of a visible family – her son and daughter reportedly returned to the country this week – and with the role of deathbed confidant at central London's Ritz Hotel, where Thatcher died, taken by her former foreign policy adviser, Charles Powell, this has felt like a public occasion from the start.

The politics has hardly seemed an intrusion. Indeed, Lord Powell said on Tuesday that the Lady would have been rather disappointed if there had not been demonstrations celebrating her death. Only too willing to oblige, the organisers of street parties and "happenings" in Brixton, southwest London, or Glasgow vented their long-held urge to dance on the former prime minister's grave. Like-minded activists are now campaigning to make a chart hit of Judy Garland's Ding Dong! The Witch is Dead.

But the more serious, if subtler, effort is happening on the other side.

The wider Tory (Conservative Party) tribe seems determined to use the nine-day limbo between her passing and her funeral to define Thatcher in death in a way that would have seemed impossible, if not outright absurd, in life: as above and beyond politics, as a national rather than partisan figure, as an incontestable and uncontested part of our collective inheritance.

The Tory papers have led the charge, both the London-based Mail and the Telegraph devoting their front pages to the same, semi-regal portrait: backlit, bestowing on the golden visage of the one-time leader a kind of halo. Page after page lavished praise on this latter-day Gloriana, accompanied by images of her as if in battle, riding in that tank, urging us to "rejoice!", dancing with her fellow Cold War warrior, Ronald Reagan.

Implicit intentions
On the front of the Mail, the words "The woman who saved Britain". Inside, a declaration that she belongs in the pantheon of Britain's greatest leaders, alongside Pitt the Younger, Gladstone, Disraeli, Lloyd George and Churchill. Search for a picture of, say, the miners' strike and you search in vain.

The Mail is not content to leave its intentions implicit. It has mounted a campaign for a full state funeral for Thatcher, granting her parity with Churchill. Such an occasion would ensure Thatcher's transformation is complete, magically recasting the woman who once divided the nation into a consensual figure from an undisputed past – no more controversial than Pitt or Churchill.

The Mail's in-house firebreather, journalist Simon Heffer, has not been placated by the British government's reassurance that the ceremony will be "all but" a state funeral. "'All but': those two words harbour the resentment of the left at her unquestioned triumph as a leader, visionary and statesman," Heffer wrote. "The left will not forgive her for proving them wrong."

If you thought the British government and Buckingham Palace were safely out of the hands of "the left", you would be wrong. Those institutions, insisted Heffer, have been cowed by fear of "the left" into denying Thatcher her due.

This attack on the government from the right has obscured the more remarkable truth: which is that Buckingham Palace has indeed broken with recent precedent in granting Thatcher the treatment it gave none of her postwar predecessors. She will get full military honours, on a par with the Queen Mother. In eloquent confirmation of the fact that the institutions of the state are to be deployed in the service of a party political figure, the British ministry of defence's codename for the army's ceremonial work next week is Operation True Blue. Queen Elizabeth II herself – who stayed away from the funerals of Eden, Macmillan, Douglas-Home, Heath, Callaghan and her reputed favourite, Wilson – will be among the mourners.

The only reason it won't be called a state funeral is that an event of that status requires a vote of Parliament in order to disburse public money. Palace and government have clearly decided that such a debate of MPs – with the likely voicing of dissent – is best avoided, the better to maintain the illusion that the funeral itself will project: that Thatcher's cherished place in collective memory is now a matter of consensus. As the Labour MP and historian Tristram Hunt puts it, by their decision "the palace is sanctioning her beatification".

Reagan's former dance partner
All of this recalls the send-off granted to Thatcher's beloved ally across the water, Ronald Reagan. Before his funeral in 2004, he was still an object of controversy, his small-state, free-market crusade an ongoing matter of furious debate. But by the end of six days of solemn devotions and ceremony, a kind of sorcery had been performed. Reagan was no longer the Republican president who had enraged his domestic opponents but a national icon, fit to be mentioned alongside Roosevelt and Kennedy, if not Washington and Lincoln.

"He was hailed as a secular saint," says Jonathan Martin, a reporter for Politico. After his death the focus became not his ideological programme but "his optimism, smile and the way he exuded a mom-and-apple-pie American spirit", says Martin. The end result was to reforge Reagan into "an apolitical marble man", a national monument rather than political flesh and blood.

Nearly a decade later, something similar seems to be at work now with Reagan's former dance partner. Just as the Reagan eulogies omitted his sacking of 11 000 air traffic controllers and fostering of a greed-is-good culture, so today's partisan obituarists for Thatcher have pushed to the edges the devastated mining pit villages or the hollowing out of the country's industrial base, focusing instead on the easier, feel-good achievements – restoring national confidence, putting the great back into Great Britain and the like. If Thatcher is remembered that way, then why shouldn't she be seen as an unambiguous national treasure?

For those demanding such treatment the hope, surely, is that if Thatcher is commemorated like that, then so too will be Thatcherism. In the United States, it has become harder to attack Reaganism, partly because of that intense week of mourning for Reagan. There is no reason why the same process could not happen in Britain.

Especially because the opposition are, inadvertently perhaps, colluding in it. Determined not to be slammed as lacking decorum and good taste, the Labour Party moved fast to button its lip, senior figures taking to Twitter to instruct all supporters to "respond with dignity". From the leader on down, the party's statements have expressed nothing but respect, even if qualified by an unspecified reference to "disagreement".

Battles
The trouble is that has left the loudest dissent to the likes of MP George Galloway and the idiots who put out a banner declaring: The Bitch is Dead. Nothing could have delighted the right more, their papers clearing space to condemn every last Thatcher-loathing placard or tweet. Such outbursts confirmed their thesis: that Thatcher spoke for the whole nation, those who disagree confined to the wild and lunatic fringes. (Any fact that might shatter that illusion – such as the low ratings for the Thatcher tributes on TV – has been deemed too inconvenient to get much of a mention.)

Through that lens, even the archive images of past battles have looked different: the faces of Thatcher's adversaries Arthur Scargill (former president of the National Union of Mineworkers), trade unionist Brenda Dean, former Labour MP Michael Foot and others suddenly appearing archaic and eccentric, as irrelevant and unrepresentative as the current crop of Brixton demonstrators – even though they were nothing of the sort. But because of  the silence of the mainstream left – broken only by respectful, nuanced tributes – the impression goes unchallenged.

This is how history gets rewritten, the winners presented as inevitable and incontestable, those who opposed them deluded and doomed. It did not feel like that at the time. Back then, it felt as if Britain was divided fairly evenly. It felt, to recall a song of the time, like two tribes gone to war.

Strangely, it feels like that again now – two tribes battling over the memory of the fiercest warrior they ever knew. – © Guardian News & Media 2013