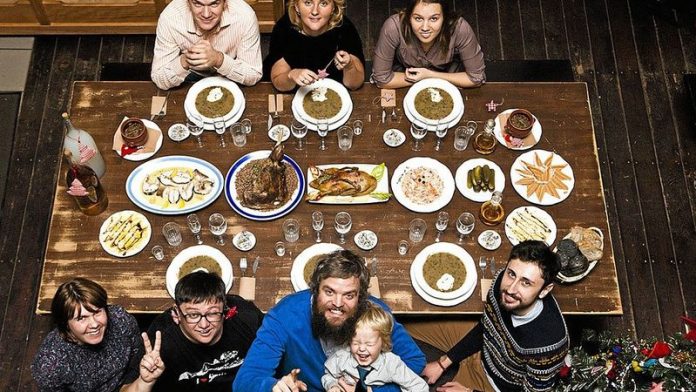 Moscow’s “first modern farmer’s market” is on the fifth floor of Tsvetnoy, a luxury department store. It sells Italian olives, British jam, cashew nuts, dried pomelo, sushi and pasta, and organic hamburgers. As far as I can tell, there aren’t any Russian farmers there. There is surprisingly little Russian anything.

Despite a long culinary history and a large agricultural sector, modern Russia, from its supermarkets to its bistros, seems ambivalent about local, organic or even particularly fresh food.

For all their renewed nationalism, gastronomes in Moscow and St Petersburg are still recovering from Soviet austerity and prefer soy sauce to cabbage, Sicilian wood-fired ovens to traditional brick pechki. Look at Noviy. Sited in Sfera, a swish Moscow mall, between shops selling Cartier pens and 24-carat cell-phones, this restaurant imagines itself as the future of dining. You browse the menu on a projector mounted over each table — it’s as if every patron has a giant iPad to play on — and can also use it to send flirty messages to the oligarch smoking a hookah across the room. Yet Noviy’s food recalls an airport first-class lounge: baguettes, steak, burgers, pasta and “spicy” sushi, doused in orange sauce. It’s as generic as the hood ornament on a black Mercedes-Benz.

“Russian restaurant food is crap,” declares Boris Akimov, a rare evangelist for organic local food. “Owners are thinking about balalaikas, costumes, the things you see on the walls — not about what you actually eat.”

Akimov is trying to change things with his company LavkaLavka, a café and farmers’ collective that is a culinary must on any tour of Moscow. The cafe, in the Arma complex, an old gasworks behind Kursky station, offers seasonal, locally sourced fare such as cheese curd drizzled in buckwheat honey, pine nuts and cranberries — a Dostoyevsky favourite.

Tall and burly with a bushy beard, Akimov used to be creative director of Russia’s Snob magazine. About five years ago, with his wife and friends, he started to get interested in food and cooking. But there was a problem: “Not how to cook — but where to find the ingredients.”

With his friend Sasha Mikhailov, an IT director, Akimov began to take weekend drives to villages outside Moscow, seeking farm-fresh milk, foraged mushrooms and grass-fed beef. “It was just our passion, not our business,” he says. But before long they were taking orders for friends around Moscow and packing Sasha’s apartment with jars of honey and pyramids of beets.

What started as a hobby is now at the forefront of the Russian food scene. Formally launched in 2009, LavkaLavka offers foodies in Moscow, St Petersburg, Kaliningrad, Chelyabinsk and Kiev (and more to come) the chance to buy fresh food from family farms. A few clicks of their mouse and some eggs from the village of Masugino, or a jar of Karachay-Circassian pine nut jam, can be delivered to their door.

LavkaLavka also organises agritours to farms and other food-related events, such as a monthly farmers’ show-and-tell for children, which are designed to encourage consumers to think about the food they eat and where it comes from. Basic provisions such as milk, eggs from Vladimir-based farmer Nikolai Aldushin or honey from the Volodin family near Voronezh are sourced from a network of around 50 carefully vetted farmers.

“If a customer just wants to buy food, they can do that,” says Akimov. “But if they want to know more — what did this animal eat before it became meat? — they can.”

There are unique challenges for this locavore food distributor: truly “organic” food is rare in Russia; growers, with long memories of Soviet collective farming, aren’t much interested in co-ops; and after decades of eating government-allotted groceries, Russians have a kneejerk aversion to someone else choosing their food. Produce boxes, the standard model for community-supported agriculture in much of the world, are a non-starter.

LavkaLavka is beginning to introduce subscriptions, but most of its clients (it has 5 000 in Moscow alone) prefer to make their orders carrot by carrot.

Russian restaurants are also skittish about LavkaLavka’s produce. The company serves 500 rouble (about R145) “farmers’ lunches” at its café, and gastro-historian Maksim Syrnikov, recently profiled in the New Yorker, runs workshops there, yet only a handful of chefs buy its wares.

The blingy, experimental Varvary uses its squabs, swanky Cafe Pushkin has purchased its chickens. But it’s rare for kitchens to take regular deliveries.

“Most restaurants don’t like the idea of seasons,” Akimov says, “or variation in sizes and prices.”

The main exception is Delicatessen. Opened in early 2010, this cellar restaurant is hidden away in a residential courtyard, under a sign that reads: “Thank you for finding us.” It has a well-stocked bar and a marvellous 250 rouble lunch menu, and about half of its dishes use LavkaLavka products. There is caramelly oxtail pudding, pan-fried calves’ brains with egg yolk, a pungent garlic soup — and the inevitable burgers, pastas and pizza.

Delicatessen’s four partners have also expanded into tapas and have teamed up with Akimov to start a mobile restaurant.

“We want to inspirate [sic] the Russian traditions with new feelings and ideas,” Akimov says. “In Europe, [local food] is about health and sustainability. In Russia, it’s more than that. It’s an opportunity to revive whole regions.”

LavkaLavka and its partners aren’t just resurrecting their indigenous foods — they are reinvesting in the people who grow them. — © Guardian News & Media 2013