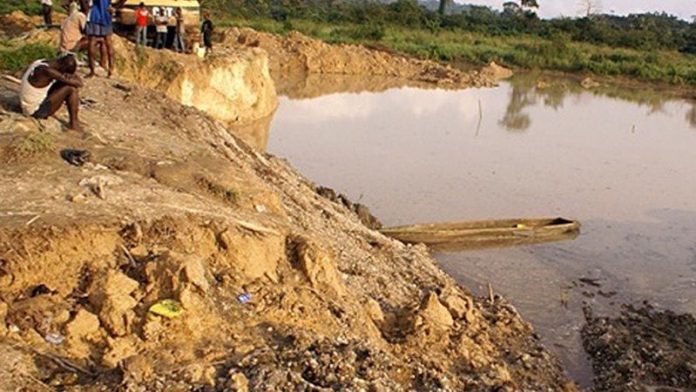 The operator completed its work at the mine near the town of Kyekyewere and returned only to shut down the operation and carry out reclamation work, said the area police commander William Otu on Tuesday.

They found several people from the local community mining illegally, who refused when asked to leave.

Not long after, "the operator got information that the mine caved in and covered the people," the police commander said.

"The number of those trapped were 22," said local government official Peter Owusu-Ashia.

Sixteen bodies were found dead at the scene, while six others were rushed to the hospital for treatment.

"One later died" said Owusu-Ashia, putting the toll at 17. "We have stopped rescue operations for now."

Adding to mining disasters
He explained that the illegal miners were working with tools that they found discarded at the site.

The west African nation of about 25-million people is one of the world's top gold exporters.

The country has been hit by similar disasters in the past, including a 2010 incident that killed 32 people in the south of the country. Heavy rains poured into the clandestine mine causing it to cave in.

The previous year 18 people, including 14 women, were killed in one of Ghana's worst mining disasters. A similar number died in another cave-in in April 2007 at a mine west of the capital Accra.

Many of the country's illegal gold-mining pits are exploited by so-called "galamsey" – often farmers evicted to make way for large-scale mining operations or former miners who lost their jobs to machinery.

Ghana's heavy reliance on gold production is expected to decline in the coming years as output from the nascent offshore oil industry ramps up.

The nation is also a major exporter of cocoa.

"They know what they are doing is wrong, and nobody supervises them and for that matter, they do it haphazardly, and then get away with it," the radio station quoted him as saying.

"We will make sure that we disband illegal mining in the central region," he said.

Ghana's economy was once in a shambles, but the country has made considerable advances since military rule ended in 1992.

Ghanaians have since voted in six presidential elections and its economy has been among the world's top growers in recent years.

It saw roughly 14% growth in 2011, thanks largely to the launch of significant oil production, while 2012 saw roughly 8% growth. – AFP

Civil servants are the foundation of any good democracy