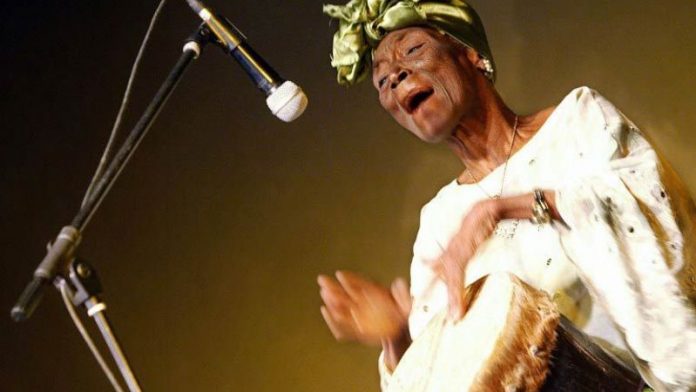 Kidude, a legend in East Africa, was thought to be around 100 years old. She died on Wednesday at her home.

"She has died, we are making funeral arrangements," her nephew Baraka Abdullah Said told Agence France-Presse.

He said his aunt had been confined to bed for the past several months.

Kidude, whose real name was Fatuma binti Baraka, and who performed and toured up until very recently, was best known for Taarab music, which combines Arab and African influences.

A diminutive and wrinkled figure with a haunting voice, she displayed immense energy on stage, beating a large drum clamped between her legs and occasionally drawing on a cigarette or taking a swig of liquor from the bottle.

In 2005 Kidude, who started her singing career back in the 1920s, received the prestigious World Music Expo award for her outstanding contribution to music and culture in Zanzibar.

Zanzibar's most famous musicians
Kidude was one of the most famous cultural icons from the East African island of Zanzibar, a semi-autonomous part of Tanzania, whose people and traditions are a melting pot resulting from centuries of trade across eastern Africa, the Arabian Gulf and Indian Ocean.

When she was born Zanzibar – once a famous port for slaves, ivory and spices – was under British colonial rule.

She was regarded as one of Zanzibar's most famous musicians.

Freddie Mercury, the lead singer of rock legends Queen, was also born on the island, but left as a teenager for Britain. – Sapa