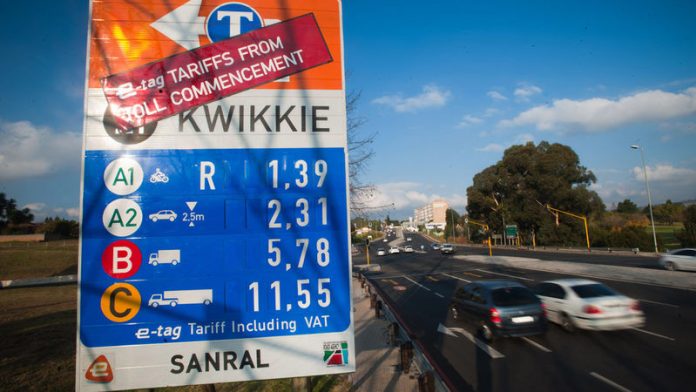 The South African National Roads Agency Limited (Sanral) revealed to Parliament’s portfolio committee on transport last week that new tolls were being considered for implementation on the:

The plan also revealed that the new projects were temporarily placed on hold by Transport Minister Ben Martins to allow for “thorough” consultation. This included contract negotiations.

According to the plan, other tolling plans on hold included the N2 Wild Coast project, which received final environmental authorisation from the minister of water and environmental affairs in mid-2011.

“Discussions are ongoing with the affected communities. The project was expected to be tendered in 2012, but is currently also on hold due to the minister of transport’s announcement,” the report stated.

“It is most unfortunate that the delays in the implementation of these projects are primarily due to the binding constraints within government. Sanral has neither influence nor control over the decision making processes and/or timing of the decision by the contributing provincial or national departments.”

The report said other significant toll-road projects that were already under construction were the N17 from Springs to Ermelo, and the road from Bloemfontein to Kroonstad, via Welkom.

“Progress with respect to the projects will be in close liaison with the department of transport, and will be guided by the decision regarding toll roads being supported by the user-pay principle. Should they go ahead, it is anticipated that these projects, with a combined value of approximately R20-billion, will continue to be funded by money and capital market loans,” according to the report.

User-pay system still being discussed
Sanral was at pains to emphasise that national policy on toll roads and the user-pay system was still under discussion. Although this affected all new plans, projects currently being deliberated would continue as scheduled.

Sanral’s total toll budget for already-approved projects in 2012/13 was R4.7-billion, although this figure could increase as more projects were approved.

The Transport Laws and Related Matters Amendment Bill, currently before the National Council of Provinces, was given the go-ahead by Parliament in March.

Ollis said on Sunday that public consultations needed to be held in all nine provinces and called for the Bill to go back to Parliament for further deliberations. He said the planned tolls would affect the poor the worst.

Ollis added new tolls would increase the price of doing business, result in food price increases and undermine economic growth and job creation. “While the DA recognises the need for funding to be sought to help eliminate South Africa’s road maintenance backlog, wholesale erection of toll roads is not the solution.

“A dedicated Road Maintenance Fund – sourced primarily from the fuel levy – would ensure regular supply of funds to gradually eliminate South Africa’s road maintenance backlog. This backlog has been caused by two decades of underinvestment by the government,” said Ollis.

'Expensive' tolls
Sanral could not be reached immediately for comment.

The Congress of South African Trade Unions (Cosatu), meanwhile, remained opposed to the tolling system, most notably in Gauteng.

Recently, the trade union federation's anti-tolling efforts were revved up in two provinces.

On Thursday, Cosatu in the North West voiced its opposition to what it called "expensive" tolls at the Swartruggens toll gate. Cosatu provincial secretary Solly Phetoe said the union called for a boycott of the road and the payment fee of R71 for light motor vehicles.

Opposition to the tolls in the Western Cape continues, with both Cosatu and the DA in that province opposing the initiative.

The Western Cape High Court on May 16 will hear city of Cape Town's attempts to stop the proposed tolls.