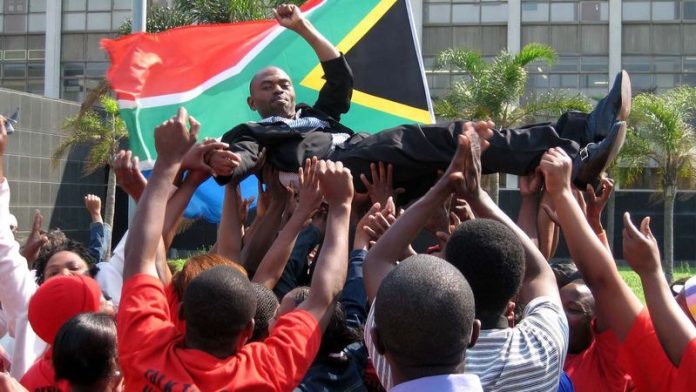 On Monday, Police ­Minister Nathi Mthethwa was ordered by the Durban High Court to pay R165 000 in damages to two activists from the shack-dweller movement Abahlali ­baseMjondolo and a member of the Kennedy Road informal settlement in Durban who had been injured by police gunfire.

The claim for damages stems from a 2006 incident involving S'bu Zikode and Philani Zungu, at the time, respectively, the president and vice-president of Abahlali, who were arrested and beaten by police.

The third claimant, Nondumiso Mke, was shot in the leg by police after the Kennedy Road community had mobilised to protest the apparently indiscriminate arrests of Zikode and Zungu, which led to police closing off the settlement, locking it down and firing indiscriminately into it.

The Mail & Guardian was present at Kennedy Road the night police fired randomly into the settlement.

At the time, police told the M&G that Zikode and Zungu had been arrested because they were suspected of being in possession of a stolen car. They were charged with resisting arrest and assaulting a police officer. These charges were later withdrawn.

Speaking to the M&G this week, Zikode said that at the time of their arrest and assault the police had not informed them what they had been charged with, or of their rights to an attorney, and they were not advised not to answer any questions until such time as an attorney was present, a right enshrined in section 35 of the Constitution.

'A black man is always a suspect'
"We asked why we were being arrested and were told that, 'A black man is always a suspect'," said Zikode. "We were kicked into a van, handcuffed and taken to the police station where we were kicked into the interrogation room. There was no interrogation: I was grabbed by the neck, thrown against the wall several times and asked if I believed I was 'Jesus Christ who was going to save all the mjondolos [shacks]'.

"I remember Philani fell unconscious to the ground for about five minutes," said Zikode, adding that they had received no medical attention while being detained overnight, despite bleeding "from the head and nose and suffering severe headaches".

Speaking after his first court appearance in 2006, Zungu told the M&G that former Sydenham police station superintendent Glen Nayager had assaulted him after his arrest.

"I was punched and had my head beaten against the wall by Nayager until I fainted," he said.

"He kicked me in the private parts and when I asked him why, he said 'Because you are a ball.'"

At the time, Nayager, who has since died, said: "I had nothing to do with their arrest. I can't comment on the allegations against me."

Asked this week to comment on Boston Marathon bombing suspect Dzhokhar Tsarnaev not being read his Miranda rights before being questioned by United States security agents M&G which, like section 35 of South Africa's Constitution, guarantees the rights of an arrested person to a lawyer and not to implicate themself under duress M&G Zikode said it was "shocking", as the South African state often adopted best-practice models from countries such as the United States.

At risk
"As a movement, we have always been under attack by the police," said Zikode. "They either criminalise us and our attempts to protest peacefully, or harass us. This sort of action [regarding Tsarnaev] is already happening to us, but it is worrying if it becomes more accepted internationally."

This is a view shared by Bonnie Meyersfeld, the director of the Centre for Applied Legal Studies at Wits University, who said that: "Often, police act outside the Constitution, making our legal system one merely on paper."

Meyersfeld said activists were especially at risk and there was concern that those responsible for indiscriminate arrests and torture were not being held accountable by the authorities.

The United Nations Convention against Torture defines torture as: "Any act by which severe pain or suffering, whether physical or mental, is intentionally inflicted on a person for such purposes as obtaining from him or a third person information or a confession, punishing him for an act he or a third party has committed or is suspected of having committed, or intimidating or coercing him or a third person, or for any reason based on discrimination of any kind, when such pain or suffering is inflicted by or at the instigation of or with the consent or acquiescence of a public official or other person acting on official capacity."

What happened to Tsarnaev during his interrogation is unclear. What is clear is that he was not afforded his Miranda rights because of a worrying trend by the Barack Obama administration to take a more expansive interpretation of the public safety exception clause to the Miranda rights.

In 1984, the United States Supreme Court established the exception clause in the case of State of New York vs Quarles.

In that case, an alleged rapist was wearing an empty gun holster and his intended victim had told police that he was in possession of a gun. Before reading him his Miranda rights, the arresting questioned the suspect about the whereabouts of the gun. The court allowed the suspect's answer to stand in evidence, as its location had posed an immediate threat to public safety.

Broad approach
This ruling suggests that police and federal officers in Boston would be allowed to ask Tsarnaev whether there were any other bombs planted in Boston or anywhere else as these would prove an immediate threat to public safety, but not much else.

But the Obama administration's broader interpretation of the exception clause is reflected in a 2010 justice department memorandum to the Federal Bureau of Investigation, noting that "there may be exceptional cases in which, although all relevant public safety questions have been asked, agents nonetheless conclude that continued unwarned interrogation is necessary to collect valuable and timely intelligence not related to any immediate threat and that the government's interest in obtaining this intelligence outweighs the disadvantages of proceeding with unwarned interrogation".

This broad approach has been used on other terror suspects, including Faisal Shahzad, who tried to bomb New York's Times Square in 2010.

The American Civil Liberties Union M&G in its 2010 review Establishing a New Normal, which examined national security, civil liberties and human rights under the Obama administration M&G noted that there was a ­significant scaling back of civil liberties under Obama, especially when it came to "terror suspects".

Jaimie Williamson, the legal advisor to the International Red Cross and an expert on terrorism and the law, also underlined this trend, but noted that it did not apply only to the US government.

Williamson, who was speaking at a discussion titled "Terrorism and Civil Liberties: An Impossible Balance?" at the Commonwealth Law Conference in Cape Town last week, suggested that this differentiation of rights for criminals and those suspected of terrorism activity had led to "lacunas" in both domestic and international arrest, interrogation and prosecution procedures of terror suspects and a reversal of minimum standards of rights, such as the right to be presumed innocent until proven guilty, or not to be tortured.

It is a worrying international trend, say activists, which is being replicated on ordinary citizens in nascent democracies such as South Africa's.