Suzman was against apartheid, but she was not for liberation 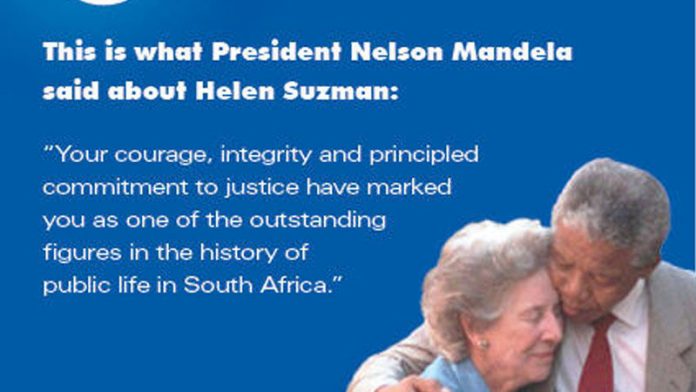 The Democratic Alliance last week launched its "Know Your DA" campaign, aimed at educating people about the party and the role it played in the anti-apartheid struggle. As the face of this campaign to claim its stake in the struggle for liberation, the party chose Helen Suzman, the MP of the DA's first predecessor, the Progressive Party, who used her tenure in Parliament to condemn apartheid.

Yet, not content with the role its beloved ancestor played as a lone opposition voice against the National Party for 13 years, the DA sought to exaggerate its role in history. It appropriated the image of former ANC president Nelson Mandela, the face of the anti-apartheid struggle, placing him with Suzman on the campaign pamphlet.

The DA's campaign document vandalises and vulgarises the ANC logo and compares Africa's oldest liberation movement with the apartheid government. It mischievously draws parallels between post-1994 tragic events, which this government swiftly condemned and acted on, with the apartheid regime's deliberate brutality and institutionalised criminality against the black majority.

The DA has the right to blow its own trumpet about the role it played in history. But it has no right to insult the intelligence of our nation through factual misrepresentation, distortion and lies.

To equate Suzman's role in the anti-apartheid struggle with that of Madiba, by publishing the picture of their friendly embrace, is an act of great desperation and political fraudulence. There is no denying that Suzman played a particular role in opposing apartheid as a member of Parliament. Nor is there any denying that public opinion about her role in an unrepresentative system was as divided as opinion has been on Margaret Thatcher since her recent death.

The indisputable fact is that Suzman served in a discredited political system, which was declared a crime against humanity by the United Nations. Her participation in such a system legitimised an unjust order and made her complicit in the horrors it unleashed. Michael Morris, in Apartheid: The Illustrated History, eloquently describes her as a "token in itself of the political complacency of the bulk of white society".

Parliamentary transcripts
Because of her participation, on behalf of the affluent minority white constituency of Houghton, she often found herself conflicted and speaking with a forked tongue on issues of principle. For this she drew the ire of true revolutionaries. For instance, in his message to the ANC's external mission in 1971, Oliver Tambo, then ANC president, chastised Suzman for being "in favour of change – but determined to prevent change".

In 1970, the ANC had said clearly: "Suzman has neither the mandate nor authority to speak on behalf of oppressed masses of South Africa."

Scrutiny of her parliamentary activism shows that hers was not the cause the oppressed masses shared. She supported some controversial Bills, including those that limited the rights of black South Africans, purportedly because – as she was fond of saying – they "represented a step in the right direction".

Hansard, the parliamentary transcripts, reflects her vigorous push in 1973 for an increase in social welfare – for whites.

Suzman threw her weight behind the Nats's counter-revolutionary campaign of the late 1960s and early 1970s, the objective of which was to weaken African countries' stance against apartheid. During her brief visit to Zambia in 1970, Suzman voiced her full support for official diplomatic contact between apartheid South Africa and African countries, with a view to ending economic sanctions. As Tambo said: "Suzman and lesser agents of colonialism have turned Africa into a veritable hunting ground for stooges and indigenous agents of racism."

During her visit to the British House of Commons in 1989, Suzman arrogantly reiterated to the international media: "I am against disinvestment and sanctions. I totally support Mrs Thatcher on this issue."

Negative part of Suzman's history
Suzman did not only dedicate her energy to protecting the economic interests of the white minority by rejecting international calls for disinvestment. She also used her influence to block international financial donations to the liberation movements to help sustain their anti-apartheid programmes. In 1970, she opposed the decision by the World Council of Churches to grant $200 000 to liberation movements.

Much has been made of Mandela's "friendship" with Suzman, including her visits to him on Robben Island and the negotiations she facilitated for his release. But in 1969, during Suzman's visit to the island, Mandela maintained that political prisoners should be released, just as the Afrikaner rebel Robey Leibbrandt was released despite his treachery during World War II. Suzman's response was to echo the condition the Nats gave to Madiba for his release: that until he had renounced violence she could not ask for his release.

Suzman opposed the use of arms by the liberation movement to defend the defenceless masses against a criminal and barbaric regime, but she seemed not to mind the apartheid regime replenishing its arsenal. As the regime escalated its violent attacks against opponents, including murder, banishment, persecution and harassment, Suzman stood with the Nats in endorsement of British arms sales to the murderous South African state. The resumption of arms sales to South Africa was against UN Security Council resolutions of 1963.

Today, Helen Zille has the audacity to paint the ANC and the deliberate acts of criminality and institutionalised violence perpetrated by the Nats with the same apartheid brush.

Revolutionaries could not trust Suzman because of her double agenda, inevitably, given her compromised position as a supporter of human rights serving in a system guilty of gross human rights violations. As Joe Slovo, then chairperson of the South African Communist Party, said in 1983: "Mrs Suzman and I may both be against apartheid but we are certainly not both for liberation."

After her death on January 1 2009, the ANC, despite its clashes with Suzman during apartheid, said it "remembers and respects the contribution of Suzman towards the demise of apartheid". As a movement rooted in the ancient African traditions of ubuntu, which teaches us never to talk ill of the departed, the ANC did not mention the negative part of Suzman's history.

Today, because of the reckless political posturing of her successors, we are forced to reflect on this painful part of our history. We would have preferred that she be left to rest in peace.