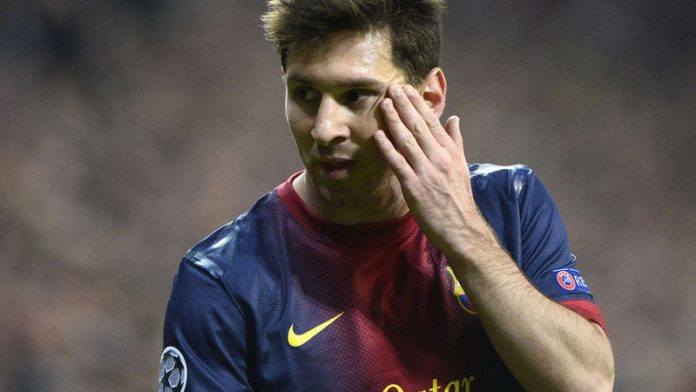 The world player of the year looked out of sorts in Munich last week as an energetic display from the hosts tore Barca to pieces, but Messi did come off the bench to score a wonderful individual goal and set up a second for Alexis Sanchez in Barca's 2-2 draw with Athletic Bilbao on Saturday.

And Barcelona assistant manager Jordi Roura believes Messi has started to find his feet again after being troubled by a hamstring injury for the past month.

"Messi is the best player in the world and obviously when you don't have him you notice it. He makes the difference," he told a press conference after the game.

"He will continue with his recuperation after the injury. He was very good today and we hope that little by little he arrives at his best level. He will continue improving and the better Leo is the more chances we will have against Bayern."

Despite Messi not being at 100% recovered, Barca's principal problem in the first-leg was their defending and manager Tito Vilanova has even more problems at the back with Jordi Alba suspended for Wednesday's clash.

Adriano does return from suspension and is expected to replace Alba, however the biggest doubt remains who will partner Gerard Piqué in central defence.

Return of Mandžukić
Javier Mascherano returned to light training on Monday well ahead of the schedule planned for him after suffering a lateral knee ligament injury against Paris Saint-Germain on April 2 and he could be thrown straight back into the side, although Vilanova also has the option of using either Eric Abidal or Alex Song.

Bayern by contrast will be able to welcome back striker Mario Mandžukić after he too missed the first leg through suspension.

And despite their comfortable lead, manager Jupp Heynckes said he won't rest any of his six first-team regulars that could miss the final should they be booked at the Camp Nou.

Captain Philip Lahm, Dante, Javi Martínez, Luiz Gustavo, Bastian Schweinsteiger and Mario Gómez are all just one booking away from missing the showcase at Wembley should Bayern seal their passage into the final next month.

"I won't be making any concessions," Heynckes told the club's website.

"I'll select my best available team. The players will have to show great discipline, which means: no gestures, no unnecessary fouls, and they mustn't let themselves be provoked. That's the decisive factor."

'Best team in the world'
And having once experienced losing a tie after winning the first-leg 5-1 when manager of Borussia Mönchengladbach against Real Madrid in 1985, Heynckes is determined not to make the same mistake again.

"We need the same attitude, willingness to run and good tactics," he said.

"Barcelona are still the best team in the world. We know they're capable of stunning results at home, and they've overturned deficits in the past. Their pride has been wounded and they'll give it everything they've got. We'll need a top performance."

Both Dante and Jerome Boateng missed training on Monday but both are expected to line up in central defence as German international Toni Kroos remains Bayern's only absentee through injury. – AFP