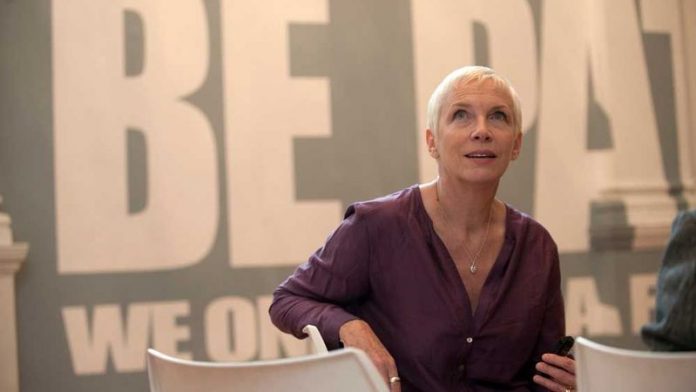 The pop icon, who has been campaigning against Aids for a decade, took up the cause against gender-based violence after hearing of the murder of Anene Booysen earlier this year.

Booysen’s story horrified the nation after the 17-year-old was found at a construction site where she worked, having been disembowelled and raped. She died a short while later.

“The world doesn’t know about Anene Booysen, and the world should know about that, and we should all work to prevent that from happening,” Lennox said at at a meeting of the Cape Town Press Club on Thursday.

Where government is failing in its attempts to curb the problem, Lennox called on the public to hold the state accountable.

“There are people at the top of the tree in government, and what are they doing?” she asked.

Silent protest
On Valentine’s Day this year, Lennox participated in a silent protest sparked by Booysen’s death, on the steps of St George’s Cathedral in Cape Town.

Following the protest, and with the help of long-time human rights activist and academic Rhoda Kadalie, Lennox began a petition to end violence against women and girls, which has garnered the support of almost a hundred organisations and foundations, including the Nelson Mandela Foundation, the Elton John Aids Foundation and the Charlize Theron Outreach Africa Project.

Lennox teared up describing her disbelief at the accounts of abuses perpetrated against women and children that she has been privy to through her local activism work.

“It is so dark … it can’t be true that children are being raped and abused like this [but] it's true, it's true,” Lennox said, before being overcome with emotion.

She also called for a new vision of feminism that reached out to men and included them in the fight against violence.

“I believe the feminist movement must include men,” Lennox said. “Men can and must become feminists with us. The notion of old-fashioned feminism as we’ve grown accustomed to it, is outmoded. Contemporary feminism is needed everywhere, especially in the developing world and it desperately needs men.”

Gender issues
While she understood the stridency and anger of the women’s movement she said it had worked to alienate men, when it should “bring men and women together to fight this epidemic.”

Lennox revealed a deep dislike for the term celebrity, which she called “repugnant”. Nevertheless, she understood it given her career as a musician, artist and songwriter, she said and wanted to use the “currency” of this status as a platform for the causes she was passionate about.

Scottish born Lennox shot to fame as part of 80s pop duo, the Eurythmics, and is an multi-award winning artist in her own right. In 2011 Queen Elizabeth II appointed Lennox, officer of the order of the British Empire.

In 2003, she was invited as part of former president Nelson Mandela’s 46664 campaign to perform in Cape Town, when her interest in Aids activism was sparked.

She has since been an avid champion for the cause becoming an Unaids goodwill ambassador in 2010. She is married to Mitch Besser, a South African doctor and founder of the Mother2Mothers programme, which works to prevent mother to child transmission of HIV.