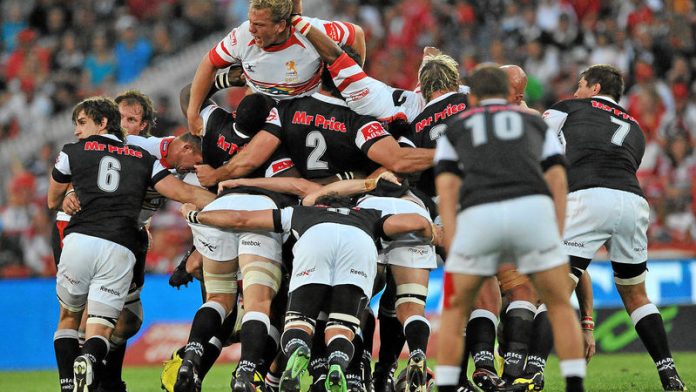 Flyhalf Marnitz Boshoff kicked six penalties, three conversions and a drop goal to end with 25 points at the Vodacom Cup quarterfinal at Kings Park 2 in Durban on Friday.

The Sharks XV, who boasted Springbok loose forwards Willem Alberts and Ryan Kankowski in their pack, replied with a try from wing Sizo Maseko while pivot Fred Zeilinga ended with a personal haul of 20 points courtesy of six penalties and a conversion.

The Golden Lions will play the winner of the quarterfinal between Western Province and Griquas, a result which will be determined on Saturday.

The visitors' forwards began to gain the upper hand in the second half and outside centre Deon van Rensburg crashed over a converted try in the 47th minute after taking a pop pass from lock Hugo Kloppers.

Zeilinga hit back with a penalty but the visitors essentially secured their victory when left wing Anthony Volmink split the Sharks XV defence wide open to zip over for a converted try in the 59th minute.

'Scrappy first half'
​Zeilinga and Boshoff exchanged penalties before the Golden Lions ended the match with a late breakaway try for fullback Chrysander Botha.

The scrappy first half was dominated by the boot with Boshoff and his opposite number Zeilinga monopolising the scoring as the visitors edged into a 15-9 lead thanks to five penalties from Boshoff.

However, the Sharks XV, grabbed the first try of the match when left wing Sizo Maseko sniped over for a try between the posts, in the 39th minute, after taking the scoring pass from Zeilinga.

Boshoff had the final say in the half with a wonderful 35-metre snap drop goal after the hooter had sounded as the Lions went to the break leading 18-16.