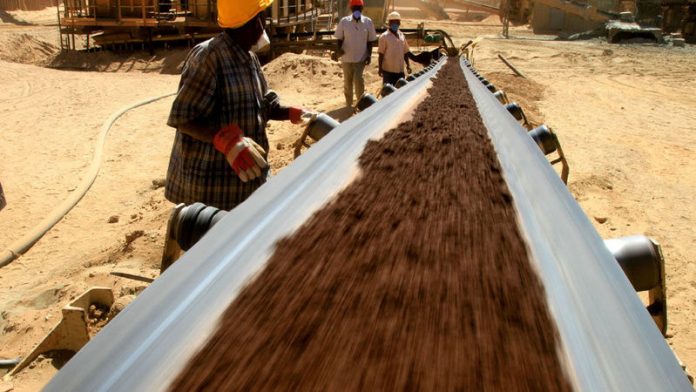 "Today the searching has stopped because it was too dangerous," the man said on Saturday from the scene of the tragedy in Jebel Amir district, more than 200 kilometres north-west of the North Darfur state capital El Fasher.

No one has been found alive.

The unlicensed desert mine began to collapse on Monday, and several days later the stench of death was seeping out of the baked earth.

Nine rescuers disappeared on Thursday when the earth collapsed around them, the miner said, adding eight bodies had been recovered.

It was not clear whether they were rescuers or miners.

Nobody else has been found, alive or dead, said the miner, who asked to remain anonymous.

"According to what I got from my people here yesterday, they didn't find anybody [else]," he told Agence France-Presse on Saturday.

Unclear the number of victims
The Jebel Amir district chief, Haroun al-Hassan, could not be reached but on Friday he said rescuers using hand tools were "having difficulty" to reach the victims.

He said heavy machinery could not be brought in out of fear that it would cause a further collapse.

But the ground fell around some of the rescuers anyway.

Hassan said the number of victims was unclear on Friday, though he gave an initial death toll of more than 60 on Thursday.

Production from unofficial gold mines has become a key revenue source for the cash-strapped government in Khartoum.

It is also a tempting but dangerous occupation for residents of Sudan's poverty-stricken western region of Darfur which has been devastated by a decade of civil war, inter-tribal fighting and other violence.

A humanitarian source said earlier this year that close to 70 000 people were digging for gold in Jebel Amir.

Sudan is trying to boost exports of the precious metal and other non-petroleum products after the separation of South Sudan two years ago left Khartoum without three-quarters of its crude oil production.

Unlicensed artisanal gold producers
The lost oil accounted for most of Khartoum's export earnings and half of its fiscal revenues, sending inflation above 40% while the currency plunged in value on the black market.

In 2011, the government estimated there were more than 200 000 unlicensed artisanal gold producers, generating most of the country's output of the resource.

Sudan's central bank has entered the market, trying to buy from the small producers.

Seven weeks of clashes over gold between two Arab tribes in Jebel Amir early this year killed more than 500 members of the Beni Hussein tribe, an MP for the group said.

The violence uprooted an estimated 100 000 people.

The fighting between the Beni Hussein and Rezeigat erupted when a leader of the latter tribe, who is a border guard officer, apparently laid claim to a gold-rich area inside Beni Hussein territory, Amnesty International said.