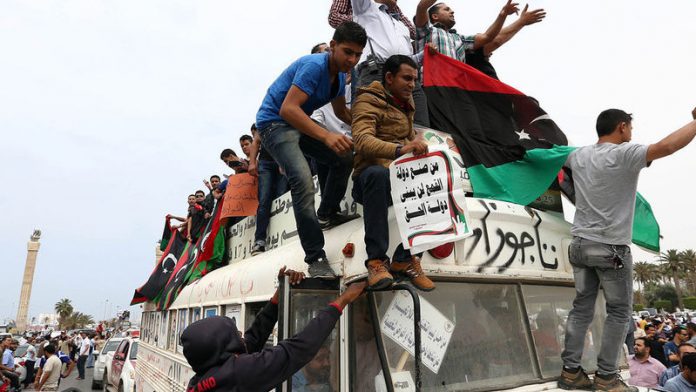 On Monday gunmen demanded the Libyan government's resignation as they besieged ministries despite the adoption of a law to purge officials from the regime of dead dictator Muammar Gaddafi from their posts.

"We are determined to continue our movement until the departure of [Prime Minister] Ali Zeidan," said Osama Kaabar, a leader of the militias who had promised to lift their siege if the law was passed.

The General National Congress, under pressure from the gunmen, on Sunday voted through the controversial law to exclude former Gaddafi regime officials from public posts in a move that could see the premier removed from office.

An Agence France-Presse correspondent reported that armed men in vehicles equipped with machine guns and anti-aircraft weapons still surrounded the foreign and justice ministries on Monday.

"The adoption of the law on political exclusion is a major step in the right direction. But we will take our time to examine certain aspects of the law," said Kaabar, who is also a vice-president of the Superior Council of Libyan Tuwwar (revolutionaries).

"On the other hand we are determined to bring down the government of Ali Zeidan," he said, accusing the premier of "provoking" former rebels who fought Gaddafi's forces during the 2011 armed uprising.

"We hope that Ali Zeidan recognises his inability [to govern]. I don't understand why this man is in such a post," said Kaabar, a former rebel close.

Under the law passed on Sunday, all those who held key official posts from September 1 1969 when Gaddafi took power, until the fall of his regime in October 2011 will be excluded from government.

The ban will remain in force for 10 years, according to the text.

The draft law caused a stir among Libya's political elite, as senior members of the government could be affected, among them Zeidan and General National Congress president Mohamed Megaryef.

Both were diplomats under Gaddafi before joining the opposition in exile.

At least four ministers and 15 lawmakers also risk losing their jobs once the General National Congress' legal commission ratifies the law, including the vice-president of the national assembly Jomaa Atiga, an official said.

Vowed to stand their ground
The gunmen, many former rebels who helped topple Gaddafi, encircled the foreign ministry for a week and the justice ministry since Tuesday to pressure the national assembly to pass the law.

They vowed to stand their ground and expand their action unless their demands were satisfied, and warned against any General National Congress attempt to make exceptions to allow key individuals to keep their jobs.

The Bill proved particularly controversial with the National Forces Alliance, the liberal coalition that dominated elections in July, who feared it was aimed at their leader Mahmud Jibril who headed an economic council under Gaddafi.

They received salaries and other perks, in addition to reportedly benefiting from smuggling and extortion.

Leaders of the former rebel militias said on Saturday that the government agreed to give five ministries over to their members. – AFP