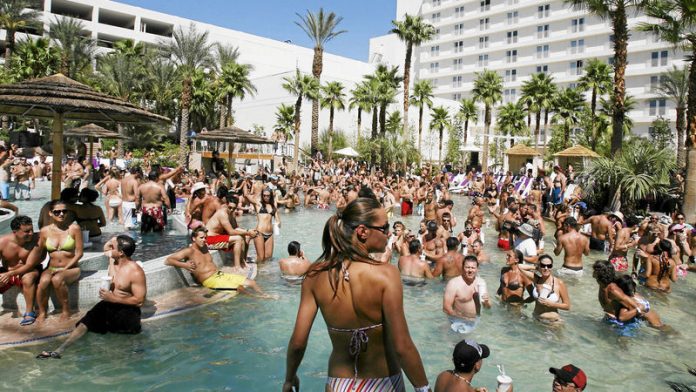 To step into club XS at the Wynn Las Vegas is to enter the dreamscape of a modern artist with fetishes for gold and bronze and bodies in motion.

A golden-plated frieze made from casts of nude women sits atop a shimmering staircase. Waves of electronic dance music grow louder with each downward step toward a pulsating, football field-sized club where lasers cut the air above thousands of dancers.

The revelers take their cues from the famous DJs onstage who are known to surf the crowd in inflatable rafts, throw sheet cakes at clubbers' faces and spray vintage champagne into their mouths.

In Sin City, where over-the-top is always the sales pitch, lavish nightclubs featuring a heart-pounding party have become the backbone of a billion-dollar industry that is soaring while gambling revenue slips.

"We learned a long time ago that in order to continue to attract people from around the world, we have to provide things that are hard to find anywhere else," said Jim Murren, chief exectuive of MGM Resorts International, which operates nine Strip hotel-casinos boasting their own dance scenes. "These clubs, if done correctly, are tremendous magnets."

A $100-million temple to revelry, XS is the top-earning nightclub in the country, joining six other Vegas venues in the top 10. Its estimated annual revenue hovers somewhere near $90-million, according to the trade publication Nightclub & Bar.

The city now boasts more than 50 such clubs. New additions are coming all the time, including the five-story Hakkasan at the MGM Grand, which debuted last month, and Light at Mandalay Bay, Cirque du Soleil's first foray into the disco business, opening at the end of May.

Heart of the recession
The rise of the Vegas super-club coincides with the decline of the town's gambling supremacy. The tiny Chinese enclave of Macau surpassed the desert oasis as the world's top gambling destination in 2006. Singapore is on track to claim the number two spot.

During the heart of the recession, when overall Strip revenues tumbled by 16%, nightclubs saw more profit than ever. By 2011, Las Vegas was clubbing all the way to the bank, with Strip beverage departments earning more than $1-billion, and casino tycoons began remaking the Strip into the club capital of the world.

With extravagantly paid DJs, larger-than-life venues and billboard ads that stretch beyond the Strip to Hollywood Boulevard and Miami, casinos are trying to pull off a tricky balancing act: keeping the kitschy core that draws older generations while finding a way to make the city hip enough to attract a younger, big-spending set – emphasis on big-spending.

"We're not interested in competing against everyone to get the 21-year-olds that are going to spend little to no money and are going to clog up the hallways," Murren said.

The 10-minute taxi ride from the airport to the Strip takes visitors past dozens of billboards promoting top DJs from Holland and beyond. Celine Dion and Elton John now take their place on marquees alongside names that recall Internet handles, such as deadmau5 and Kaskade.

Las Vegas, long known for catching performers on the downswing of their careers, finally appears to have embraced a musical trend at the height of its popularity. Globe-trotting Dutch DJ Afrojack (25) said he has come to consider the Strip his home because it's the one place he believes is as dance-music-focused as he is.

"When you exit the airport, you see [the face of President Barack] Obama – and then you see me," said Afrojack, a Wynn casino favorite.

Perhaps no place exemplifies the new culture on the glittery Strip better than XS. And for most want-to-be Vegas party people, the night at XS starts in line.

Admission reserved
Casinos snake these queues past well-traveled areas – entrances, slot banks and restaurant corridors – turning the gussied-up partiers into one more piece of visual spectacle. At XS, clubbers line up in a central hallway near the luxury stores Hermes and Chanel.

Women pay $25 and men pay $55 just to get in, but pretty girls who out-dress the dress code are admitted for free. The door charge is mostly there to weed out people who won't spend on drinks, said nightlife baron Sean Christie, managing parner of another Wynn club, Surrender.

When it first opened in 2008, XS was lucky to be filled halfway to its 5 000-person capacity, even when featuring an act such as Tiesto, the world's highest-paid DJ, according to Forbes, pulling down $250 000 a set and making $22-million a year.

Now, the club may see 8 000 people come and go over the course of a night. That's nearly half of the capacity of Madison Square Garden in New York.

As the clock edged toward 2am on a Saturday earlier this spring, superstar DJ David Guetta stood at the control board like a mad king, commanding his people.

A wiry, hollow-faced Frenchman with a curtain of blond hair, Guetta has been churning out electronic music since the genre's infancy in the world of underground raves 25 years ago. Now, at 45, he makes hits for pop music stars including Rihanna, Usher and Nicki Minaj – and conducts the crowd at XS.

At the flick of his upraised palms, Guetta had thousands of revelers whooping, jumping and punching their fists in the air. When he added a drumbeat into a chorus, metallic streamers dropped from the ceiling and a fog machine churned.

"Nothing compares with this," said 23-year-old Katie Kelly, a student in San Louis Obispo, California, as she bobbed her index fingers skyward. "You just release and don't care about anything."

Hey, big spenders
XS boasts that its layout is modeled on "the sexy curves of the human body." In practice, the design steers people to the bars on a back wall.

Female bartenders, their long hair draped over sequined black corsets, serve $15 shots of Jack Daniels whiskey, coordinating their pouring to the skull-rattling bass and synthetic blares vibrating around them. A supermarket (a few kilometers) away sells a bottle of Jack containing 17 shots for $16.

When newbies push through the swaying crowd to grab a table, they find that Vegas has monetised sitting, too. Patrons pay a $10 000 beverage minimum upfront to claim any of the dozen plush banquettes nearest the dance floor.

By the time Guetta hit his stride on this night, all of the club's 95 tables were full, including the cheaper seats away from the action and one uber-VIP table on stage. Near the bigger-than-your-apartment, 102-square-metre dance floor, four scantily clad girls gyrated in front of three men wearing suits and skinny ties.

"We have a lot to spend," said Park, who is in his mid-30s and works as a realtor in Canada. "That's why we have all the girls."

Casinos learned long ago that some VIPs don't see the point of being VIPs unless everyone can see them being VIPs, so clubs oblige big spenders with spotlights and velvet ropes cordoning off their mini-empires.

But not everyone at a table is a high roller. Some are splurging, or sharing the cost with their friends. Superstar DJ Kaskade, a Vegas regular, said he hears from fans who saved for months to pay for a table and a weekend of fun in Vegas.

"It's because they see videos of this stuff and they say: 'This is nuts.'"

Today, the club craze is moving beyond the dance floor.

XS opens into an open-air adult playground complete with table games, food and a huge circular pool. Around 3am on this particular night – still several hours from closing time – women in bachelorette sashes waded toward floating white platforms as crescendos drifted over the water.

Beckoning from the other side of the pool, past clumps of partiers, is the upscale "vibe-dining" restaurant Andrea's, where DJs spin lounge music. Hakkasan is taking the vibe-dining concept further, importing a London-based, Michelin-starred Cantonese restaurant to serve as the foundation for its five-story complex.

Most casinos have also incorporated nightclubs during the day – a way to infuse the dance scene into an otherwise typical summer pool party.

At Andrea's, while taking in a production he helped create, Christie confessed he worries about what might happen to Vegas now that it's banking so heavily on an indulgent club scene – especially if 20- and 30-somethings develop a taste for a new indulgence.

But then he quickly corrected himself, saying he'd be just as happy to lure patrons with country and western stars.

"Whatever they want, I just serve up. Hopefully, I serve it up the best," he said. "I'm not one to care about that kind of stuff. I'm just here to make money and throw great parties." – Sapa-AP