Hawking vs Turok: Betting on the origin of the universe 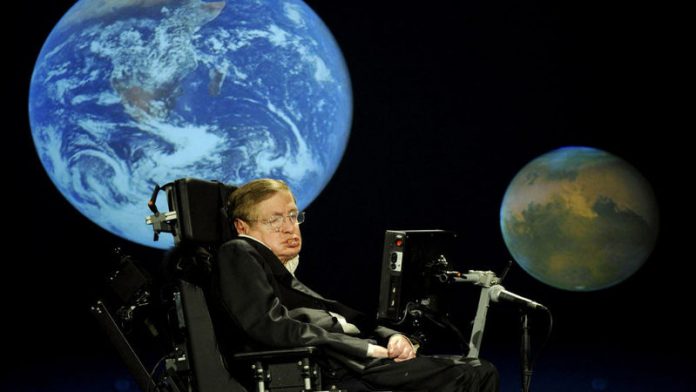 The iconic scientist balked at Turok's proposal for a money wager, so they agreed on another kind of stake: bragging rights over which of them had discovered the true story of how both Creation and time began.

Their bet – which boils down a complex debate – was supposed to be settled by the Planck science satellite, which released its "spectacular" batch of data last month. Instead, the analysis of the data has left Turok fuming.

Hawking champions the stan-dard big bang "inflation" theory, which says space and time began 13.72-billion years ago, and that Albert Einstein's laws did not apply to the first bizarre moments of creation. (Actually, last month, Planck adjusted our cosmic age to 13.8-billion, which means two-thirds of the water in your glass – the hydrogen part – is 80-million years older than you might have thought).

But Turok, together with his collaborator Dr Paul Steinhardt, insists our universe is the child born of a dead parent universe and that there was no beginning at all.

Turok and Steinhardt achieved global scientific recognition when their equations suggested that their theory was not only mathematically correct, but also explained "what banged" in the big bang.

Accepting Turok's "cyclic" model is like Neo from The Matrix choosing the red pill. First, it would mean that whole, perhaps trillion-year-old universes have already lived and died, giving ample time for "alien" civilisations to have risen and developed to unimaginable levels of sophistication, or self-destruction, long before history itself.

More startlingly, the maths equations imply that we're all really living not only in three dimensions (up-down; left-right; back-and-forward), but also in an additional seven – most of which are too small to see, and one of which (eish) is an invisible membrane we're actually living on. It suggests everything in our ancient parent universe accelerated to the speed of light, causing these geometric structures to collide in what we know as the Big Bang.

Hawking's problem was that an earlier satellite, called WMAP, showed that the universe is almost exactly the same temperature every-where you look – and 13.8-billion years is far too little time for the heat from the Big Bang explosion to have spread so evenly in such a vast space.

The Planck satellite was launched partly to look for evidence of a bizarre phenomenon which could have forced this heat to the far corners of the cosmos. If Planck discovered "gravitational waves" – stretch marks from a weird growth spurt in the early universe – they agreed Turok (and Einstein) would be wrong, and Hawking vindicated.

Last month, the Planck scientific team admitted they had found no such waves.

But Turok – who lived in exile with his parents in East Africa and studied at British universities, eventually becoming chair of mathematical physics at Cambridge University – has received no contrite phone call from Hawking.

Recently reappointed as director of the Perimeter Institute for Theoretical Physics in Canada, a research centre founded by the billionaire creator of the BlackBerry, Mike Lazaridis,  Turok is working on what is arguably the world's largest effort to create a quantum computer: the weird and almost infinitely more powerful potential replacement for digital technology.

Although he stresses that Hawking remains "a great friend", the Johannesburg-born cosmologist – who lives with his wife in the technology corridor town of Waterloo, Ontario – was clearly annoyed with "spin" from the Planck team that appears to have scuppered their bet.

Despite failing to detect the cosmic stretch marks, the Planck scientists have reported that other data support Hawking's inflation model.

Turok insists the evidence "quite clearly" does the opposite, and affirms his own model.

"The Planck collaboration has completely misrepresented the implications of the data for the cyclic model, and my collaborator is currently completing two papers [in response]," said Turok.

"We have these spectacular results from the Planck satellite – what they are telling us is that the universe is unbelievably simple, and beautiful and elegant. The inflationary theory is not beautiful – it is horribly contrived; it doesn't deal with the big problem, which is the big bang singularity. And the data rules out 99% of the ad hoc models that make up that model."

At a seminar in California last week Hawking skirted the issue, focusing instead on the satellite's measurements of the mysterious "dark energy" force.

An expert from the Waterford Institute of Technology, Cormac O'Rafferty, told Forbes magazine that any discovery of "non-random fluctuations" in the background heat in the cosmos would have boosted Turok's ground-breaking model but that Planck's failure to find them made the theory "less likely".

It seems the truth of our beginning – and the scale of Turok's intellectual legacy – may have to wait at least until Planck's comprehensive data release next year.

The plan to unearth Africa's geniuses

It's not just a personal dream when Neil Turok says: "The next Einstein will come from Africa."

The South African cosmologist has launched a continent-wide project to cultivate geniuses who will set about answering humanity's greatest questions. Called the "Next Einstein Initiative", 15 institutes for egghead training are being rolled out from a headquarters in Cape Town, with a fourth centre due to open shortly in Cameroon.

Turok insists Africa is home to thousands of potential intellectual giants who could shape global technologies – from quantum computing to epidemic modelling and new materials for cars.

The 54-year-old scientist says his vision was rooted in an experience he had as a volunteer teacher in rural Lesotho in the late 1970s.

Having asked his primary school class to go outside and measure the height of the building, he found one boy drawing in chalk on the pavement while his classmates were diligently walking rulers up the wall.

Lateral acuity
The boy explained that he had finished the assignment: he had measured one brick, counted the rest, "and multiplied". That boy, he says, would likely have gone on – "if he was lucky" – to find a job in a mine, despite a brain which fired with the speed and lateral acuity of an intuitive genius.

Turok founded the initiative's first African Institute for Mathematical Sciences (Aims) in 2003 in a once derelict Art Deco hotel in Muizenberg.

His team has seen 450 students from 35 countries graduate at master's level with advanced maths and science degrees. Students live with their lecturers in the 80-room facility in an interactive, 24-hour university, where entrepreneurship and policy study has been added to the curriculum. Turok says five graduates are produced for the cost of one in the west.

He told a recent Ted conference: "We wanted interactive teaching, with each student maximising their own potential – no droning on from the chalkboard, and no chasing grades. Students often leave the computer lab at 2am or 3am."

Turok candidly admits that he used his pull to get global experts – including Nobel prizewinners and his famed collaborator, Stephen Hawking – to give seminars and sometimes one-on-one instruction to his young stars.

Some graduates now work on the Large Hadron Collider experiment in Switzerland and others at the National Institute of Health in the United States. But 70%, he says, continue to teach or research in Africa. Among a small cohort of South African graduates at Aims (seven among 61 new students enrolled this year) is Daphne Singo, the daughter of a Limpopo domestic worker, who has just received her PhD in nuclear physics.

Fantastic future
Barry Green, director of Aims Cape Town, said local applicants had been scarce for three reasons: many graduates are poached by the private and public sectors, there are low university enrolment rates in science and the Aims intake had been in August. A January semester was launched this year to accommodate South Africans.

Partly funded by governments – with grants from Google – centres have been launched in Senegal and Ghana, and Cameroon's government has promised start-up funding for a centre there.

He says Aims was designed partly "to demonstrate that Africans can produce world-class research", after decades in which "the continent has been marginalised from modern science. There is a ton of talent; of genius, in Africa, and it's only highly skilled Africans who can move Africa towards development; even a fantastic future."

Turok suggests that Africans have the edge on the West in driving the future: "In the 19th century, Jews were excluded from European universities in scientific and technical degrees but when they were admitted, they transformed science and our world – people like Albert Einstein and Niels Bohr.

"I'm looking to young African geniuses to do what Jews did for modern science. When a set of new cultures enter science, they bring new energy, new perspectives, unconventional thinking. Genius." – Rowan Philp

‘Multiverse’ theory cut down to size

More questions about how old the universe is