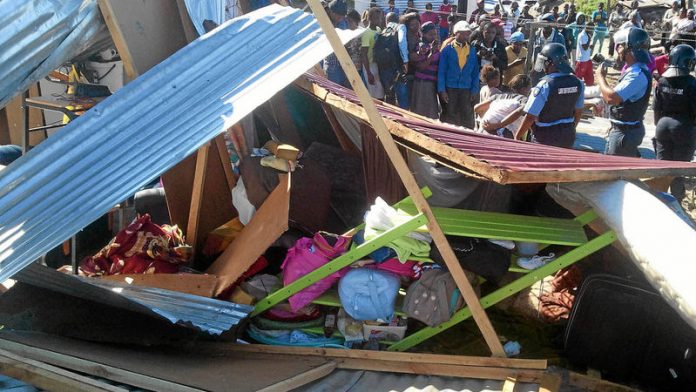 On April 27, while political parties were spending fortunes to celebrate freedom, the shack dwellers' movement Abahlali baseMjondolo commemorated – or "mourned" – what it called UnFreedom Day in Sweet Home, the shack settlement in Philippi on the Cape Flats.

On the same day, a group of shack dwellers from the Philippi East area increased their occupation of a piece of land just off Symphony Way, between Stock and Govan Mbeki roads. But a day later, the City of Cape Town decided to show them exactly how unfree they still are.

This settlement, according to community leader Sandile Ngoxolo, was named the "Marikana land occupation" in honour of the workers who died last year in North West province in their struggle for a living wage – and because "we too are organising ourselves peacefully and are willing to die for our struggle". Homes were built and occupied, and families worked through the night of Freedom Day to put the finishing touches to them.

On Sunday April 28 the Democratic Alliance, which runs Cape Town and which is trying to showcase an anti-apartheid past with the "Know Your DA" campaign, showed that its approach to land issues is not so different from that of the old apartheid National Party. At 1.15pm a large contingent of the city's anti-land invasion unit (ALI) and dozens of day labourers arrived. They were backed up by law enforcement units and police vehicles, including, for extra effect, a Casspir and a Nyala.

These forces evicted residents from their homes, often beating them in the process. They pepper-sprayed Abahlali activist Cindy Ketani and then stole her phone, shot another woman twice with rubber bullets and arrested Abahlali baseMjondolo activist Tumi Ramahlele and community member Kemelo Mosaku.

Ramahlele claims to have been severely beaten by law enforcement members inside the Casspir after being arrested and is preparing to lay a charge with the Independent Police Investigative Directorate after being  examined by a doctor.

Counter-spoliation
For its part, the ALI then took apart the Marikana homes, often destroying people's property in the process.

This was repeated on Tuesday April 30 and once again on Wednesday May 1, only with a much larger police contingent present, which took down yet more homes. Two more residents were arrested.

The May Day eviction finished the job begun on Freedom Day, destroying every last home. Moreover, most of the zinc sheets residents had used to build their homes were confiscated by the ALI.

On Friday May 3 I got a phone call from a newly homeless resident, Zanele: "Law enforcement is back again. They are not only taking our zinc sheets, but now they are even taking our sails [plastic tarpaulins]. We do not know what to do. It's raining and we have nowhere else to go."

City of Cape Town media manager Kylie Hatton claimed in a statement that the evictions were done in accordance with the "Protection of the Possession of Property Act" as an act of "counter-spoliation". But Sheldon Magardie, director of the Cape Town office of the Legal Resources Centre, said there is no such law. Advocate Stuart Wilson, director of the Socio-Economic Rights Institute of South Africa, and constitutional law professor Pierre de Vos concurred.

The overarching law that regulates evictions is section 26(3) of the Constitution, which states: "No one may be evicted from their home, or have their home demolished, without an order of court made after considering all the relevant circumstances. No legislation may permit arbitrary evictions."

Unfinished and unoccupied
The Prevention of Illegal Eviction From and Unlawful Occupation of Land Act of 1998 (the PIE Act) expands on that, as well as on "spoliation", and details the procedures a municipality must follow in order to conduct a legal eviction.

According to Wilson, in common law "counter-spoliation … permits a person who is in the process of having property taken from them to immediately take that property back without a court order".

But, as Wilson, Magardie and others explain, counter-spoliation does not apply to the eviction of people from their homes. Once they are deemed squatters, or even illegal land grabbers, as per the 2004 case of Rudolf vs City of Cape Town, the PIE Act must apply.

To justify the eviction in terms of counter-spoliation, the city claims the structures were not homes but  were unfinished and unoccupied. This is a blatant lie. I saw the homes, and there are photographs and videos showing clearly that the homes were fully occupied and were being lived and slept in from as early as April 25.

On Friday May 3, for the fifth time that week, I set off for the "Marikana" occupation. When I arrived people were cold, wet, tired and depressed. "How could they take the only things we have that would keep us dry?" they wondered.

What could be the city's justification for confiscating the tarpaulins? Did they want people to get wet and sick? Is it punishment for daring to build shacks in the first place?

But, visiting Sweet Home on that cold day, I could not understand the reason why the ALI would be so malicious as to steal an item vital to the struggle to keep dry on such a miserable, rainy day.

Well-thought-out strategy
Then I remembered Naomi Klein's discussion of the role of torture in her book, The Shock Doctrine. Torture is a notoriously unreliable way to extract information but, as Klein points out, that is not its primary motive. Rather, it is to put the victims in a position of such disarray that they could not resist power.

In the case of these occupiers, shocking them with aggressive displays of power, removing their belongings and making them as uncomfortable as possible in the rain was equivalent to the "shock and awe" tactics of the American invasion of Iraq. As Harlan K Ullman and James P Wade define it in their history of the war, Shock and Awe: Achieving Rapid Dominance, the aim was "to seize control of the environment and paralyse or so overload an adversary's perceptions and understanding of events that the enemy would be incapable of resistance at the tactical and strategic levels".

Is this why the ALI flouted its own guidelines? Was it mere meanness, or a well-thought-out strategy aimed at breaking the will of the community?

Whatever the case, these actions show that the DA's liberal ideal of small, "efficient" government is a farce, because it requires an extensive, violent, often illicit system of authority to contain the basic demands of the poor – as well as their larger, emancipatory aspirations. The ANC, too, in a city such as Durban, talks about the "rule of law" while responding to the organised poor with astonishing violence.

This violence is physical, social and spatial. Geographer David McDonald writes in World City Syndrome: Neoliberalism and Inequality in Cape Town (2008) that it is now "arguably the most uneven and spatially segregated city in the country".

Abahlali baseMjondolo mourns on UnFreedom Day because, for the poor, the only thing liberalism has given them the right to vote for their oppressors.

If we are to have any chance of resolving the escalating crisis in our society, we are going to have to think beyond liberalism. To start, we need to talk about redistribution and put the social value of urban land above its commercial value.

Jared Sacks is a Cape Town-based social justice activist, freelance journalist and founder of a nonprofit organisation for children