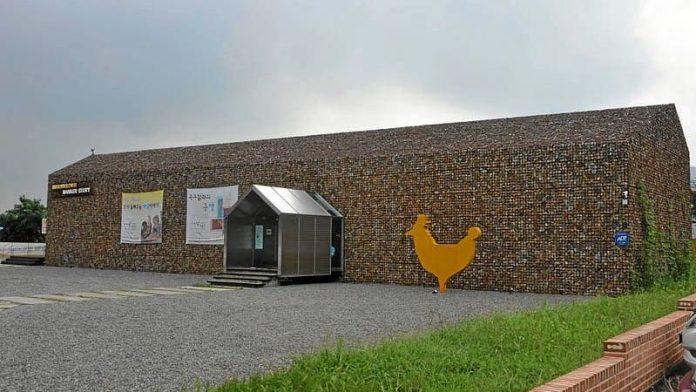 You might not expect the words “chicken” and “museum” to go together. But on the outskirts of the South Korean capital, Seoul, there is a shrine to the humble hen, loftily called the Maniker Museum of Chicken Art.

Chicken lovers may be relieved to hear that, although it is housed in the grounds of a chicken factory, there are no live birds inside the stone and wire-mesh museum. But every other variety — made out of pretty much everything in the global coop — can be found here.

A yellow cast-iron rooster, twice as tall as a person, points to the entrance — the welcome mat of which is adorned with chickens. Inside, a large curved table sports an impressive display of chickens from around the world, in no particular pecking order.

At first it is difficult to take everything in: ostentatious blown-glass chickens from Italy nest alongside homely ceramic chickens from the United Kingdom. An Indian chicken carved from a coconut competes with Japanese and Indonesian chicken brasses and vases. There are jewelled boxes from Canada, painted dishes from Germany and a Mexican leather liquor bottle in red, brown and white with a chicken’s head lid; raunchy French paintings of embracing couples dressed as a cock and hen, and an obviously American Hell’s Angel rooster sporting a leather jacket, sunglasses and bandana. There are even recycled plastic chickens from South Africa.

The museum was opened in 2006 following the passing of a law that empowered for-profit private museums. The quirky exhibition was started with a collection owned by a local chicken fancier, a retired public health professor named Kim Cho Gang. “I do not buy luxuries. I don’t buy cosmetics. I am only indulged in chickens,” said the professor when the museum opened. “Whenever I make money, I mostly spend it buying chicken art pieces.”

As one might expect from any decent museum, nuggets of chicken history abound. A display board informs visitors that chickens were first domesticated near the Andes River in Pakistan and that they were initially used in cockfights and religious ceremonies. Because they crow in the morning, they were worshipped and only royals could eat them. Their vision is seven times better than humans and they are very social creatures with a hierarchy decided by the power of pecking.

The next information board hangs alongside a photograph of a Korean wedding. Dozing in front of the bride and groom is an ornamental incubating hen, painted white and wrapped in blue and red silk, symbolising fertility. Apparently, at traditional weddings, a rooster wrapped in red silk — either real or ornamental — is also sometimes part of the ceremony,  to represent the couple’s new dawn together. Laying hens symbolise fertility and the hope for many children.

It seems that chickens are associated with many of the important life events, such as the displayed wooden sculptures of chickens, called kkok-du, which were traditionally used to decorate Korean coffins. As the only creature in the Chinese zodiac with wings, they were entrusted with the task of accompanying the dead to the afterlife.

Alongside the many contemporary paintings of chickens are several wood-framed traditional ink wash paintings from the 19th-century Joseon Dynasty. And in the kind of heavy wooden display cabinet that you would expect to find in an old lady’s parlour, there are small ceramic chickens from Germany, Hungary and Denmark and even chicken snow globes. One whole room in the museum houses chicken toys, coins and stamps.

And if you haven’t chickened out by the end of all that, you can order Seoul fried chicken and beer in the museum’s café.