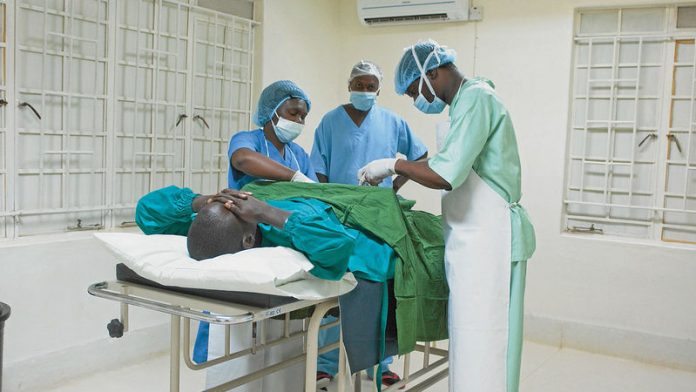 It was an ambitious plan to circumcise the majority of men in Swaziland, an effort to reduce the risk of HIV transmission in a country with the world's highest HIV prevalence. How could it have gone wrong?

“First they told me that circumcision will not really protect me against HIV. Then they tell me that I cannot have sex for some weeks or months after circumcision. I told them 'fusaki' [get out]!” Eric Dlamini, a 22-year-old law student, told IRIN.

These views are at the heart of the failure of the Accelerated Saturation Initiative (ASI) to achieve more than a fraction of its targeted goal, the circumcision of 80% of Swazi males between ages 15 and 49 within a year.

The programme, a partnership between the Ministry of Health and Social Welfare and the US-based Futures Group, was launched in 2010, and extended to March 30 2012 when initial efforts showed a failure to achieve targeted results. But only about 20% – or 32 000 – of the targeted demographic were circumcised through the programme.

“We do not believe [ASI] was a failure but an additional prevention measure that is contributing to the overall combination efforts to end the HIV/AIDS pandemic in the country,” US Embassy in Swaziland spokesperson Molly Sanchez Crowe told the local press.

Imposed from outside?
Male circumcision has been scientifically proven to reduce a man's risk of contracting HIV through vaginal intercourse by as much as 60%. Follow-up studies have found that the effectiveness of male circumcision in HIV prevention is maintained for several years.

Government health officials, like Minister of Health Benedict Xaba and Khanya Mabuza, the acting director of the National Emergency Council on HIV and AIDS (Nercha), have noted that ASI taught the country important lessons and left behind several clinics and other health infrastructure.

But a year after the programme ended, Swazi health officials are still trying to figure out what went wrong. Health workers, who spoke to IRIN on the condition of anonymity, pointed out that the programme was hastily implemented. They wondered why the short implementation time was not extended. Ending the programme, they fear, may suggest to international donors that the country is a hopeless cause.

“We have been struggling with HIV for 20 years, and we see programmes come and go. Some are fads … and some are not well thought out. The Swaziland programme came from the outside. The health ministry was willing to go along because there was money there. But it was imposed,” said Thandi Mduli, an HIV testing officer in Manzini.

Officials with health-oriented NGOs admitted to IRIN they are “terrified” of criticising an initiative funded by the "mighty" US President’s Emergency Plan for AIDS Relief (Pepfar) and involving the global population control NGO Population Services International (PSI).

The ASI programme was an attempt to duplicate in Swaziland the circumcision successes seen in Kenya and other countries, without apparently doing the pre-campaign ground work. Kenya has carried out an estimated 477 000 circumcisions since its programme started in 2008, according to the government.

In 2011, UNAids and Pepfar launched a five-year plan to have more than 20 million men in 14 eastern and southern African countries undergo medical male circumcision by 2015.

Reasons for failure
“There were a lot of issues involving male circumcision that were not properly explained to Swazi men, so they rejected it and they talked to their friends, and word of mouth was negative instead of positive. This is the opposite of what a campaign like this needs to work,” said Nercha's Mabuza.

Other issues included unfamiliarity of the procedure. "When I heard I would still have to wear a condom, I said, 'What is the point?'" said Samkelo Mduli, a university student.

A survey commissioned by the Futures Group in 2011 found that although there was a 91% awareness of circumcision, nationally, the largest barrier to circumcision was fear of pain. Other barriers included fear of something going wrong, and a general lack of understanding of the procedure.

Another reason for the rejection of circumcision was not anticipated by ASI promoters: belief in witchcraft, which is widespread in Swaziland. Criminals are known to seek “strengthening” potions made with human body parts. Killings associated with "ritual murder" routinely correspond with national elections. Victims, usually children or older people, are found with body parts missing. One attack made headlines in the Swazi press recently.

“That’s also what I wanted to know, and they wouldn’t tell me – what happens to my foreskin once it is cut off?” said Mduli.

Health Minister Xaba alluded to this when he told the Times of Swaziland, “Some men feared that the foreskin could end up in wrong hands, being used by some unscrupulous people for their ulterior motives.”

“This is embarrassing and nobody wants to talk about it,” said the programme director of a faith-based HIV/Aids initiative in Manzini. “The circumcision initiative failed because of this arrogance on the part of its promoters. It would have been easy to be honest and explain to the Swazi men that their foreskins would be incinerated like all surgical refuse. But the promoters said, 'Oh, no, we can’t talk about witchcraft. What will the donors say?'" – IRIN