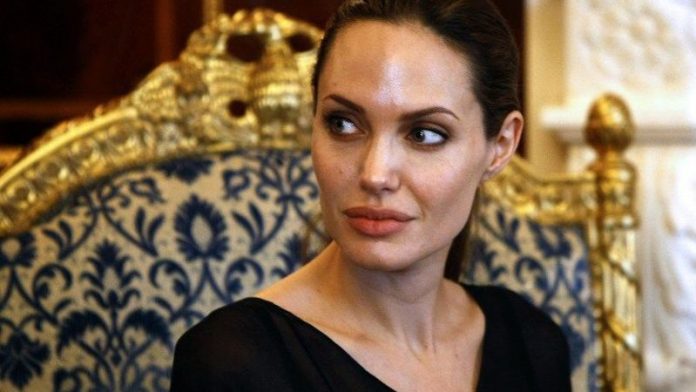 Jolie was back at work preparing for her next film just four days after having a double mastectomy, her doctor revealed in a detailed description of the actor's months of treatment.

The Oscar-winner underwent her double mastectomy on February 16 at the Pink Lotus Breast Centre in Beverly Hills, California, as the second of three operations to reduce her risk of breast cancer from 87% to 5%.

"On day four after her mastectomies I was pleased to find her not only in good spirits with bountiful energy, but with two walls in her house covered with freshly assembled storyboards for the next project she is directing.

"All the while she spoke, six drains dangled from her chest, three on each side, fastened to an elastic belt around her waist," wrote Funk in a lengthy and intimate blogpost on the centre's website that explained what Jolie underwent before, during and after her three surgeries.

Despite her fame and constant trailing by the media, Jolie's medical treatment remained a secret until Tuesday, when she wrote about her decision in an article in the New York Times.

She earned praise from breast cancer experts for flagging up the heightened genetic predisposition to the disease run by women who have inherited a faulty version of either the BRCA1 or BRCA2 gene from one of their parents.

'Nipple delay'
Jolie approved Funk's account of her treatment to help women at high risk because of their family history of either breast or ovarian cancer to understand what is involved if they opt to undergo surgery, rather than regular scans and preventive drugs as a way of managing their risk.

Jolie's first operation, on February 2, was a "nipple delay", a procedure to rule out the presence of cancerous cells in the milk ducts around the nipple in women who have decided to preserve their nipples while almost all their breast tissue is removed during the mastectomy.

"Her partner [Brad Pitt] was on hand to greet her as soon as she came around from the anaesthetic, as he was during each of the operations," said Funk.

During the mastectomy a fortnight later, a plastic surgeon called Dr Jay Orringer also "performed the first stage breast reconstruction by placing tissue expanders with allograft", which Funk describes as "synthetic sheets of material, that create a more natural look" for women having their breasts rebuilt.

Implants
Despite an extra operation being involved to fit the tissue expanders, Jolie chose to have them, because they help maximise blood flow to the breast skin and nipple, said Funk.

Ten weeks later, on 27 April, Jolie received breast implants during her third and final surgery, the reconstruction, "which went extremely well, bringing an end to her surgical journey".

Funk also detailed the myriad medications and supplements that Jolie took to help her wounds heal after each operation, reduce the risk of infection, lessen post-operative nausea, vomiting, swelling and bruising, get the anaesthetics out of her system, increase the amount of oxygen reaching her skin and minimise scarring.

Meanwhile, her partner Pitt said it was important for Jolie to share her story about having her breasts removed to avoid cancer "and that others would understand it doesn't have to be a scary thing".

In an interview published on Wednesday in USA Today, the actor said: "In fact, it can be an empowering thing, and something that makes you stronger and makes us stronger."

He added: "It's such a wonderful relief to come through this and not have a specter hanging over our heads. To know that that's not going to be something that's going to affect us. My most proudest thing is our family. This isn't going to get that." – Guardian, Sapa-AFP

The Guardian And
Guest Author

Could this finally solve the Eastern Cape’s cancer mystery?

Campaign against breast cancer all year