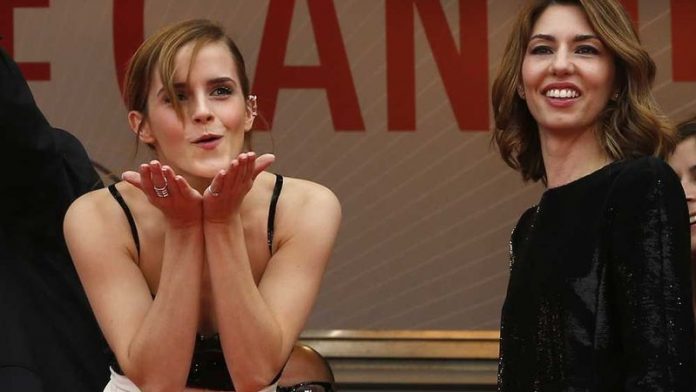 It is one of two Cannes contenders on Thursday with twists on the girls-gone-wild theme.

The Bling Ring is based on true events in fame-fixated Los Angeles where a gang of teenagers in 2009 broke into the mansions of celebrities including Orlando Bloom, Lindsay Lohan and Megan Fox.

Snatching millions of dollars' worth of jewellery and designer frocks, they sought to grab a piece of the A-list lifestyle, becoming minor social media stars themselves in the process.

"The story couldn't have happened 10 years ago and so I thought it was an interesting story for a movie that said so much about our culture today," Coppola told reporters.

The British Watson puts on a Valley Girl accent to play Nicki, the product of New Age home-schooling and flashy consumer culture who links up with a group that learns that globe-trotting stars often don't bother much with home security.

"It would be very easy for Nicki to feel like a parody, not real, and somehow I had to understand and empathise with her and that was really my biggest challenge, second to getting the accent down – it's a very specific dialect."

Paris Hilton, who leaves her house keys under her doormat, is an early victim and Coppola's camera ogles her wardrobe of slinky dresses and hip-hop-calibre baubles, and a private nightclub festooned with animal prints. It is there that Nicki gives Hilton's dance pole a spin, prepping for nights out clubbing when she hopes to get noticed by a producer and be cast in a music video.

Watson said Coppola allowed her to ad-lib and let her hair down on set, which she described as a welcome change. "It was nice to work with someone that's really spontaneous as well and I could work in a way that was a lot more loose than I was really used to – I'm used to really having to stick to my lines," she said.

When the ring is finally caught thanks to grainy security video at another star's home and their own selfies (photographs of oneself taken with mobile phones) on Facebook, Nicki proves a master at media spin.

Hilton, who lent Coppola her home for the filming, has said she plans to attend.

Britain's daily Guardian called it "an interesting surprise". "It puts you inside the unwholesome opium den of celeb-worship, and when the gang infiltrate Hilton's bizarre home, a Tutankhamun's tomb of kitsch, there is a real frisson," it said.

French-style gilded youth
Meanwhile in the main competition, France's Francois Ozon unveiled Young and Beautiful set among Paris's gilded youth with their own ennui-driven lives on the edge.

Seventeen-year-old Isabelle spends a sun-kissed family vacation in southern France where she loses her virginity to a sweet German fellow tourist.

Once back at school, Isabelle – played by Marine Vacth – inexplicably begins turning tricks, promoting herself online.

One regular john is a Viagra-popping married man in his 70s. When he has a fatal heart attack during one of their trysts, Isabelle is questioned by the police and her double life comes to light.

No one, least of all Isabelle, can articulate why she turned to prostitution but the sly smile that crosses her rosebud lips when clients flood her phone with text messages provides a vague clue.

"In all the films, French and others, I had the impression that youth was idealised while I have a painful memory of my own adolescence," Ozon said after a well-received screening.

"The idea was to create a portrait of a young girl today rooted in a certain reality but not to give all the answers, sharing the mystery [of Isabelle] with the audience."

Young and Beautiful is one of 20 films in competition for the coveted Palme d'Or top prize at Cannes which wraps up on May 26. – AFP