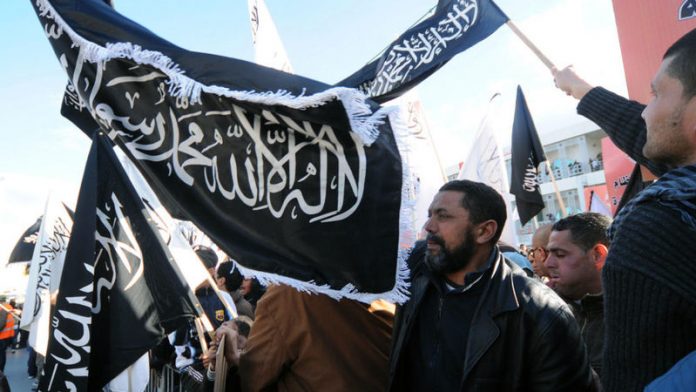 There was a heavy police presence at tollbooths along the main highway from the capital to the central city of Kairouan on Saturday, where the Salafists vowed to hold Sunday's gathering, Agence France-Presse correspondents reported.

Police were singling out for checks the private minibuses that ply between Tunisian towns, with special attention paid to men with beards – as sported by Salafists.

Inside the city, helicopters hovered overhead and police checkpoints were set up, while special units were deployed in the square facing the mosque, which is the venue for the congress.

A local police officer, declining to be named, said: "We have taken all measures to ensure the meeting does not go ahead … We will not allow those coming for this congress to enter the city."

Meanwhile, maps were posted on Facebook pages close to the Salafist movement locating the checkpoints and possible routes to avoid them.

Ansar al-Sharia had urged its supporters to travel to the venue in groups in a bid to get past police.

'Travel in groups'
"We advise our brothers coming to Kairouan to travel in groups and not to be separated because the agents of the tyrant are blocking most intersections and provoking our brothers by showing their weapons," it said on its Facebook page.

In Tunis, large numbers of police vans and army trucks were visible both in the city centre and in neighbourhoods regarded as Salafist strongholds.

As tensions mounted, a US embassy travel advisory warned Americans against travelling to Kairouan, saying "large rallies and demonstrations are possible" if the congress goes ahead.

"There is the potential for disruption to traffic in the area of Kairouan and possible confrontations with security forces. The embassy recommends against all travel to Kairouan during this period."

The Salafists have been blamed for a wave of violence across Tunisia, including an attack on the US embassy in September that left four assailants dead.

Ansar al-Sharia is considered the most radical of the extremist groups that emerged after the 2011 revolution that ousted veteran strongman Zine El Abidine Ben Ali.

The group's fugitive leader, Saif Allah Bin Hussein, a former al-Qaeda fighter in Afghanistan, warned last week he would wage war against the government led by moderate Islamist party Ennahda, accusing it of policies in breach of Islam.

"We have decided to prohibit this gathering, which would be in violation of the law and because of the threat it represents to public order," it announced.

Ahead of the ministry's announcement, Ansar al-Sharia, which does not recognise the authority of the state, warned that it would hold the government responsible for any violence.

"We are not asking permission from the government to preach the word of God and we warn against any police intervention to prevent the congress from taking place," spokesperson Seifeddine Rais said.

Rais said more than 40 000 people were expected to attend.

The interior ministry retorted: "All those who defy the authority of the state and its institutions, who try to sow chaos, who incite violence and hatred will bear all the responsibility."

It promised a tough response to "anyone who tries to attack the forces of order" and said the police and army are on "high alert to protect the security of citizens and their property".

"We say to Ansar al-Sharia that we consider it wise and a priority to announce the postponement of the congress, placing the whole responsibility for it on the government," the group said in a statement.

Otherwise, "Sunday will be a day of bloody confrontation."

The Salafists, who advocate an ultra-conservative brand of Sunni Islam, have been blamed for a spate of attacks on police in recent months. – AFP

The government is expected to evacuate citizens from Wuhan, where the coronavirus outbreak originated
Read more
Advertising
Continue to the category
Politics