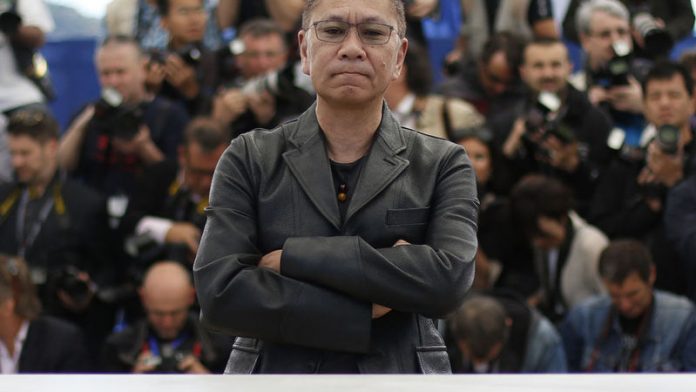 Japanese director Takashi Miike got the final week of the Cannes film festival off to an explosive start on Monday, with big budget cop thriller Wara No Tate (Shield of Straw) a sharp contrast to the more intense, intimate movies screened so far.

Typically for Cannes, where critical passions run high, both exuberant cheers and boos rang out after an advance press screening of Wara No Tate, one of 20 entries vying for the top Palme d'Or prize awarded on Sunday.

Miike, whose last appearance at the world's most important cinema showcase was in 2011, said the selection committee's decision to include his high-octane cop movie in the main lineup came as a shock.

"When I learned this film was selected I was very surprised, I was really astonished," Miike told reporters ahead of its official Monday evening premiere.

"If I got the Palme d'Or I'd be delighted of course," he said. "But I don't really think this is a film made for the Palme d'Or. But I'm delighted to know that a rather different kind of film, another class of film is in the selection."

Ethan and Joel Coen
Halfway through the festival, critics have seen a varied array of films, from Ethan and Joel Coen's quirky ode to folk music Inside Llewyn Davis to Amat Escalante's powerful Heli about Mexico's drug war.

The competition has also included the intense psychological drama Le Passé (The Past) directed by Iran's Asghar Farhadi, whose A Separation won a best foreign language Oscar.

Eagerly-awaited movies to launch this week include US director Steven Soderbergh's Behind the Candelabra about pianist Liberace and starring Michael Douglas, and La Vénus à la Fourrure (Venus in Fur) by Roman Polanski about an actress trying to convince a director to cast her in his latest play.

Since starting out in motion pictures in the early 1990s, Miike has made over 80 films, including the 1999 horror flick Audition and 2004's Zebraman about a family man superhero.

In Wara No Tate, four elite police officers are charged with protecting and transporting a high-profile criminal across the country after a billionaire puts a huge bounty on his head for the murder and rape of his granddaughter.

Apparently everyone is after the criminal, played by Tatsuya Fujiwara, raising the stakes for lead cop Kazuki Mekari (Takao Osawa) who is charged with protecting him but who resolutely refuses to kill him himself to reap the reward.

'A balance to survive'
"All of the characters in the film have their own ideas of justice … even the criminal, he has his own approach," Osawa told journalists. "There are two sides, good and evil, and everyone tries to find a balance to survive."

Despite his fondness for action, Miike also explores darker themes in the film including the morality of protecting criminals at the expense of victims and how financial desperation breeds violence.

In one early review, Screen magazine's Tim Grierson cited the "pulpy thrills" of the premise and a gripping lead performance by Osawa, but added that "plausibility issues and an unconvincing exploration of the limits of justice noticeably dampen the fun". – Reuters

Corsica refuses to drop burkini ban, becomes the third French town to do so

Jewels worth $53m stolen in Cannes