Oklahoma tornado: Dead, missing have been accounted for 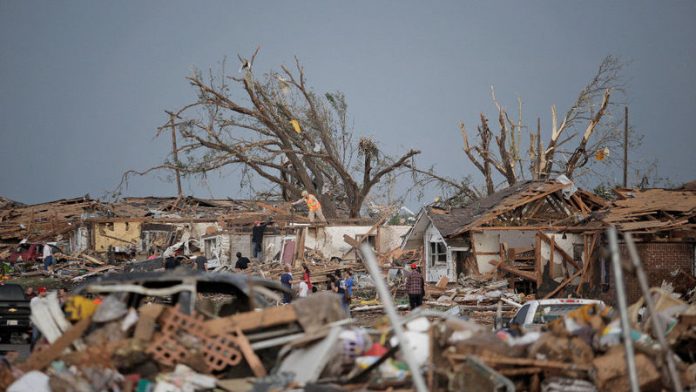 Rescuers went building to building in search of victims and survivors picked through the rubble of their shattered homes on Tuesday, a day after a massive tornado tore through the Oklahoma City suburb of Moore, wiping out blocks of houses and killing at least 24 people.

After a long day of searching – emergency crews lifted broken doors, moved sections of shattered walls and tossed aside bricks looking for survivors as cadaver dogs sniffed through the rubble – Moore mayor Glenn Lewis said he believed all the dead and missing had been accounted for.

"We've checked the area with thermal imagers, as well as gone door to door, so we feel like we're fixing to go from rescue and searching to recovery," Lewis told CNN.

The death toll of 24 was lower than initially feared, but nine children were among the dead, including seven who died at Plaza Towers Elementary School, which took a direct hit on Monday in the deadliest tornado to strike the United States in two years. About 240 people were injured.

Emergency workers pulled more than 100 survivors from the debris of homes, schools and a hospital after the tornado ripped through the Oklahoma City region with winds exceeding 200 miles per hour (320 kph), leaving a trail of destruction 23km long by 2km wide.

"Can you imagine a lion, like a huge lion? You mix it with a freight train and that's what it was like. Scariest thing I've ever heard in my life," said Kim Limke (40) in Oklahoma City's Westmoor subdivision. "It was like a freight train came out of a lion's mouth."

'A lot of chaos'
Limke rode out the tornado at her daughter's school and was surrounded by its destruction on Tuesday at her rented Westmoor home. For blocks around, houses were reduced to heaps of rubble and trees were stripped of their leaves. The air was tinged with the smell of wet pine from wrecked homes.

The National Weather Service upgraded its calculation of the storm's strength on Tuesday, saying it was a rare EF5, the most powerful ranking on the Enhanced Fujita Scale, with winds exceeding 200 miles per hour (320 kph).

In the hours right after the storm, many more people had been feared dead. At one point, the Oklahoma state medical examiner's office said the toll could rise as high as 91, but on Tuesday officials said 24 bodies had been recovered, down from a previous tally of 51.

"There was a lot of chaos," she said.

Shelters were opened for families who lost their homes, and universities offered to house people. Albert Ashwood, director of Oklahoma's department of emergency management, said it was too early to say how many people were left homeless, but clearly it was thousands, given the extent of the damage.

The National Guard, firefighters from more than a dozen fire departments and rescuers from other states were involved in the search-and-rescue effort in Moore, a town of 55 000 people. Washington deployed 300 federal disaster workers to Oklahoma.

Plaza Towers Elementary School was one of five schools in the path of the tornado. "They literally were lifting walls up and kids were coming out," Oklahoma State Police Sergeant Jeremy Lewis said. "They pulled kids out from under cinder blocks without a scratch on them."

$6-billion worth of damage
Oklahoma Insurance Commissioner John Doak said the damage to property was likely to exceed that caused by the 2011 twister in Joplin, Missouri, which killed 161 people. Insured losses from the Joplin tornado exceeded $2-billion and are expected to rise as claims are settled.

Disaster modeling company AIR Worldwide estimated the replacement value of the properties within a mile of each side of the tornado's track at around $6-billion. The figure represents a rough estimate of the potential upper limit of losses, not an actual loss estimate, it said.

"The people of Moore should know that their country will remain on the ground, there for them, beside them, as long as it takes," Obama said at the White House.

Lewis, the Moore mayor, warned residents of the danger of electrocution and fire from downed power lines and broken natural gas lines. Thunderstorms and lightning slowed the search effort and made conditions tough for families left with nothing but their clothes.

At Moore's Eastwood Estates, Nicole Moore (32) and her husband, Kelly Regouby (43), picked through the wreckage of what had been the master bedroom of their home.

During the storm, the couple, their nine-month-old son, Regouby's 20-year-old daughter and Moore's mother huddled in a shelter built into the floor of their garage. The house came down over them, but they emerged with only scratches.

On Tuesday, they recovered rain-soaked family pictures and mementos.

"As long as we find stuff like this, I'll be happy," Moore said, her voice breaking. "We'd give up 10 of these houses to have our family safe."

'It's just tragic'
In the neighbourhood, brick walls were flattened and pink insulation was scattered everywhere. Hundreds of cars looked as if they had been shelled. In a sign of the tornado's strength, a bicycle wheel found in a sodden field had lost its rim and the spokes were wrapped around the hub.

Authorities warned the town 16 minutes before the tornado touched down just after 3pm. That amount of time is more than the average eight to 10 minutes of warning.

US representative Tom Cole, who lives in Moore, said the Plaza Towers school was the most secure building in the area.

"And so people did the right thing, but if you're in front of an F4 or an F5 [in tornado strength], there is no good thing to do if you're above ground. It's just tragic," he said on MSNBC-TV.

Miguel Macias and his wife, Veronica, had two children at the Plaza Towers school. They found eight-year-old Ruby after workers rescued the girl but their son, six-year-old Angel, was nowhere to be found, said Brenda Ramon, pastor of the Faith Latino Church where the family are members.

Ramon and several congregation members spent hours helping the family search for Angel. He was located at a medical centre in Oklahoma City about five hours after the tornado hit.

"It was heartbreaking," Ramon said. "We couldn't find him for hours." The boy had wounds to his face and head, but was not badly hurt, Ramon said. "Their little bodies are so resilient," he said.

Costliest tornado
Witnesses said Monday's tornado appeared more fierce than a giant twister that was among the dozens that tore up the area on May 3 1999, killing more than 40 people and destroying thousands of homes. That tornado ranked as an EF5.

The 1999 tornado ranks as the third-costliest in US history, having caused more than $1-billion in damage at the time, or more than $1.3-billion in today's dollars. Only the devastating Joplin and Tuscaloosa tornadoes in 2011 were more costly. – Reuters