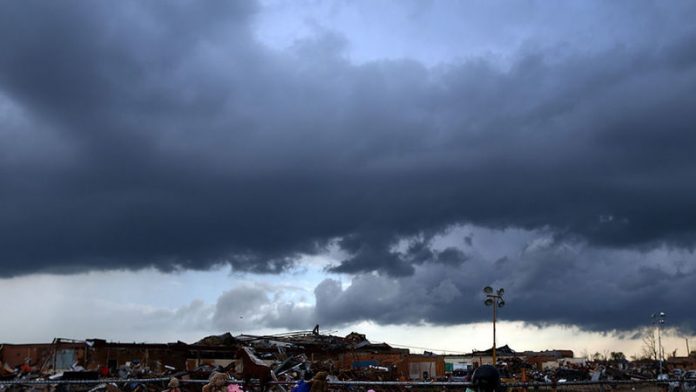 More people have died in tornadoes that swept through central Oklahoma on Friday, part of a storm system that caused widespread flooding in Oklahoma City and its suburbs, the state's chief medical examiner said on Saturday.

The dead included two children and seven adults, said Amy Elliott, a spokesperson for the medical examiner's office. The death earlier had been reported as five.

The tornadoes struck just 11 days after a twister ranked as EF5, the most powerful ranking possible, tore through the Oklahoma City suburb of Moore and killed 24 people.

The storms dumped up to 20cm of rain on the Oklahoma City area, causing flash flooding that submerged parts of the sprawling metropolitan area that is home to more than 1.3-million people. Nearly two-dozen people were rescued from areas cut off by rising water, the National Weather Service said.

Forecasters said the severe weather would shift on Saturday into Illinois, after it also hit neighbouring Missouri, where Governor Jay Nixon declared a state of emergency on Friday.

Moore hit once again
Oklahoma Governor Mary Fallin said late on Friday that she was "heartsick" that Moore, struck by a powerful tornado on May 20, could be hit once again.

"I'm here across from the capitol and it is hailing and blowing and raining extremely hard. Our tornado sirens have gone off several times," she said.

Fallin also said she was particularly worried about high traffic on the midwestern state's major highways, which could be in the direct line of the tornado.

"We hope this storm passes through and it's just some rain and hail. But we do know the winds are whipped up pretty good and it's just a loud rumble outside. It was hailing just loud from all the thunder and lightning," she told CNN. – Reuters

Oklahoma has been hit by deadly tornadoes not far from the town of Moore, where a powerful twister struck less than two weeks ago, killing 24 people.
Read more
World

Oklahoma tornado: Dead, missing have been accounted for

A day after a tornado has torn through Oklahoma City's Moore, its mayor Glenn Lewis says he believes all the dead and missing have been accounted for.
Read more
World

A terrifying twister tore through Oklahoma City leaving a path of destruction. We take a look at footage shared by eyewitnesses on social networks.
Read more
World

Americans who survived the massive Oklahoma tornado have described racing for shelter only to emerge on a moon-like landscape of debris.
Read more
Advertising
Continue to the category
Politics