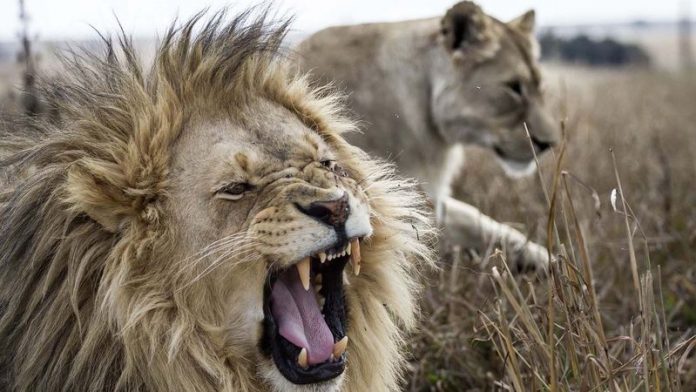 They are adorably cute, with grubby brown fur so soft it slips through my fingers like flour. It is only when one of the nine-week-old cubs playfully grabs my arm with its teeth and squeezes with an agonising grip that I remember – this is a lion, a wild animal.

These four cubs are not wild, however. They are kept in a small pen behind the Lion's Den, a pub on a ranch in desolate countryside 120km south of Johannesburg.

Tourists stop to pat them, but most visitors do not venture over the hill, where the ranch has pens holding nearly 50 juvenile and fully grown lions, as well as two tigers.

Moreson Ranch is one of more than 160 farms legally breeding big cats in South Africa. There are now more lions held in captivity (upwards of 5000) in the country than in the wild (about 2000). Though the owners of this ranch insist they do not hunt and kill their lions, animal welfare groups say most breeders sell their stock to be killed by trophy hunters from Europe and North America, or for traditional medicine in Asia.

The easy slaughter of animals in fenced areas is called "canned hunting", perhaps because it's rather like shooting fish in a barrel. A captive-bred lion is taken to an enclosed area where it wanders around listlessly before being shot dead by a man with a shotgun, hand-gun or even a crossbow, standing safely on the back of a truck. It is all completely legal.

Like other tourists and daytrippers from Johannesburg, I pay R50 to hug the lions at Moreson, a game ranch that on its website invites tourists to come and enjoy the canned hunting of everything from blesbok and springbok to lions and crocodiles.

After a cuddle with the cubs, I go on a "game drive" through the 2000-hectare estate. Herds of blue wildebeest, red hartebeest and eland run from the truck, then stop and watch us, warily. At the far end of the property is an abandoned farm, surrounded by pens of lethargic-looking big cats. Two healthy-looking tigers tear at chicken carcasses.

The animals look well cared for. But Cathleen Benade, a ranch assistant who is studying wildlife photography and is devoted to the cubs, reveals that they were taken away from their mothers just an hour after birth and bottle-fed by humans for the first eight weeks of their life.

Crucial colostrum
After dark, as the lions roar in the cages, Maryke van der Merwe, the manager of Lion's Den and daughter of the ranch owner, explains that if the cubs weren't separated from their mother, they would starve to death because she had no milk. She says the mother is not distressed: "She's looking for the cubs for a few hours, but it's not like she's sad."

Animal welfare experts disagree. They say breeders remove the cubs so that the lioness will quickly become fertile again, as they squeeze as many cubs from their adults as possible – five litters every two years. For an animal that is usually weaned at six months, missing out on the crucial colostrum, or first milk, can cause ill-health. "These breeders tell you they removed the cubs because the mother had no milk; I've never seen that in the wild," says Pieter Kat, an evolutionary biologist who has worked with wild lions in Kenya and Botswana. "The main reason breeders separate the young from their mother is because separation brings the female back into a reproductive position much faster. It's a conveyor-belt production of animals."

South Africa has a strong hunting tradition, but few people express much enthusiasm for its debased canned form. It is still legal to bring a lion carcass back to Britain (or anywhere in Europe or North America) as a trophy, and much of the demand comes from overseas.

Five years ago, the government in effect banned canned hunting by requiring an animal to roam free for two years before it could be hunted. But lion breeders challenged the policy and a high court judge ruled that such restrictions were "not rational". The number of trophy hunted animals has since soared. In the five years to 2006, 1830 lion trophies were exported from South Africa; in the five years to 2011, 4062 were exported, the vast majority were captive-bred animals.

Demand from the Far East is also driving profits for lion breeders. In 2001, two lions were exported as "trophies" to China, Laos and Vietnam; in 2011, 70 lion trophies were exported there. Although the trade in tiger parts is now illegal, demand for lion parts for traditional Asian medicine is soaring. In 2009, five lion skeletons were exported from South Africa to Laos; in 2011, it was 496.

Breeding facilities
The legal export of lion bones and whole carcasses has also soared. "It's definitely a rapidly growing source of revenue for these canned breeding facilities," says Will Travers of the charity Born Free. "The increase and volume are terrifying."

Breeders argue it is better that hunters shoot a captive-bred lion than further endanger the wild populations, but conservationists and ­animal welfare groups dispute this. Wild populations of lions have declined by 80% in 20 years, so the rise of lion farms and canned hunting has not protected wild lions. In fact, says Fiona Miles, director of Lionsrock, a big-cat sanctuary in South Africa run by the charity Four Paws, it is fuelling it.

The lion farms' creation of a market for canned lion hunts puts a price tag on the head of every wild lion, she says; they create a financial incentive for local people, who collude with poachers. Trophy hunters who begin with a captive-bred lion may then graduate to wild ones.

"It's factory-farming of lions, and it's shocking," says Miles. "The lion all around the world is known as the iconic king of the jungle, and yet people have reduced it to a commodity, something that can be traded."

An alternative use for the captive-bred lions might be tourism. We go for a "lion walk" with Martin Quinn, a conservation educator and lion whisperer. This involves strolling through the veld with three adolescent white lions that have been bred on Moreson ranch and trained by Quinn and his assistant, Thompson.

These striking white lions bound around us, rush on and then lie in the grass, ready for an ambush. Armed only with sticks, Quinn and Thompson control them, while warning us that they are still wild animals. It is an unnerving experience, but Quinn hopes this venture will ­persuade Moreson ranch that a live lion is worth more than a dead one.

Canned hunting
He claims that since he began working with lions at the ranch in January, the owners have not sold on any lions to be hunted. He hopes the ranch will eventually allow the ­offspring of its captive animals to grow up in the wild.

Van der Merwe is doubtful that Quinn's lion walks could replace the income the farm receives from selling its lions. "We keep them up until six months for attractions for the people and then we sell them to other lion parks." She insists her ranch's website is wrong, and it does not hunt lions. "We sell them to other people who have the permit for lions. What they do with the lions is up to them. So we don't know what they do with the lions, but we don't do the canned hunting."

Three hours' drive from the ranch is Lionsrock, a former lion-breeding farm transformed into a sanctuary for more than 80 abused big cats since it was bought by Four Paws. Some come from local breeding farms, but Four Paws also rescues animals kept in appalling conditions in zoos in Romania, Jordan and the Congo. Unlike in the lion farms, the animals here are not allowed to breed, and instead live within large enclosures in their natural prides.

"If we can stop people supporting those industries in the first place and make them aware of what the life of a [captive-bred] lion is actually like, I believe there will be an outcry," says Miles. "There's far more value for a live lion long-term."

Lion breeders such as Van der Merwe are not so sure. She says her caged lions have little to do with canned hunting, but admits that if canned hunting was banned, "it would probably not be good for us … There are a lot of people from overseas coming to shoot lions. All the people know you come to Africa to shoot the lion. They surely bring some money into South Africa."

She sees nothing wrong with hunting lions or keeping them in captivity. In fact, she says, she is part of a family of animal lovers. "We grew up with them, so it's nice. It's like babies in your house – when they are really small they walk around in your house and they follow you." – © Guardian News & Media 2013

Our oceans provide us with oxygen, food, recreation, transport and energy; humans should return the favour
Read more
Advertising
Continue to the category
Politics