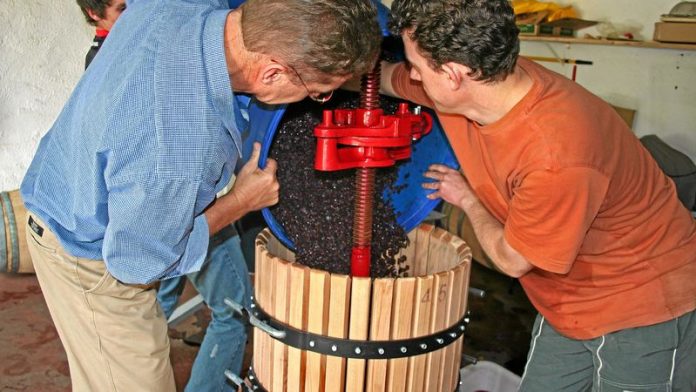 Stuart being accountant ­Stuart Campbell, who started up a garagiste winery at his home in Parkmore with Parkhurst-based friend and architect Brett Chrystal.

The Parks Winery is now in its fourth vintage, no mean feat when one considers the fact that the ­cellar is more than 1 000km away from where the grapes are grown.

The two admit to being avid wine enthusiasts who have always wanted to make their own vintage. After studying at Stellenbosch, Campbell returned in 2008 to complete a ­garagiste winemaking course and Chrystal, a dedicated member of the ­Cellar Rats wine club in Johannesburg, completed his Cape Wine Academy diploma.

Said Chrystal: “Our first harvest was in 2009 and we chose shiraz because it was the most difficult to cock up in terms of winemaking as it is a very forgiving grape.”

Grapes were sourced from a grower between the farms Delaire and ­Camberley in the Helshoogte Pass (close to Thelema). The pair had 500kg of refrigerated grapes transported to Johannesburg overnight and so began the rather daunting process.

Once the grapes were pressed (they considered foot-stomping and hand-pressing, but then bought a stainless steel crusher, which did the trick) they experimented with two 110 litre oak barrels and, in the end, blended the contents together to make their first harvest.

The learning curve has been considerable. In 2010, they encountered some serious problems due to bacteria and had to toss an entire oak barrel of wine down the drain. Controlling the temperature of the barrels during the Jo’burg winters has proven to be a frustrating exercise, but the use of a fish-tank heater has helped.

In 2012, after tasting a range of wines from Muratie Wine Estate and being particularly enamoured with the shiraz, Chrystal convinced Muratie to sell the Parks Winery 500kg of its shiraz. Said Chrystal: “We transported the grapes up to Johannesburg in a refrigerated truck and matured them ourselves in Stuart’s garage in second-hand barrels bought from Thales, a barrel refurbishment company in Stellenbosch.” The 2012 harvest has been maturing in second-fill French oak for close on 14 months and will probably be bottled in July or August.

The fun part comes in bottling the wine. “This is generally a very social event, with wives and friends helping to wash and dry bottles with much wine drunk in between corking and labelling bottles,” said Chrystal.

In 2013, the Parks Winery changed from shiraz to cabernet sauvignon, and Campbell and Chrystal were lucky enough to source grapes from close to the Peter Barlow block of cabernet at Rustenberg Estate.

The initial barrel samples are promising.

According to Chrystal, the Parks Winery is not alone, there are nine keen garagiste outfits in Gauteng.

“We made the decision in 2012 to certify our wine via the South ­African Wine Industry Information and ­Systems  and we will be only the second certified wine in Gauteng after Jozi Wines in Rivonia,” he said.

Maybe, one of these days, Cape winemakers will be looking over their shoulders at the competition coming from Jo’burg’s northern ­suburbs — or not.

The Treasure Chest Collective: Changing the identity of SA wine