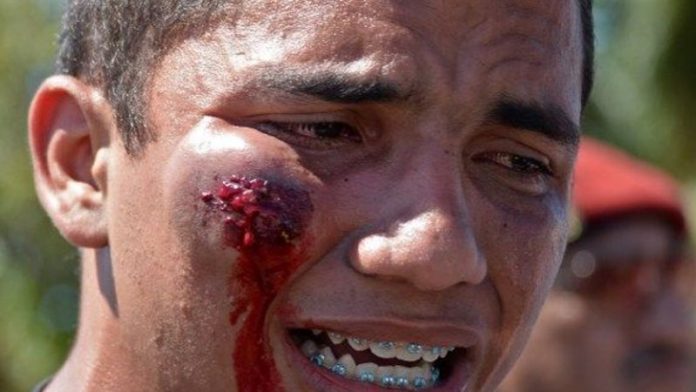 Their collective cry is against a longstanding lament – people are weighed down by high taxes and high prices but get low-quality public services and a system of government infected with corruption.

That was the repeated message on Tuesday night in Sao Paulo, where upward of 50 000 people massed in front of the city's main cathedral.

While mostly peaceful, the demonstration followed the rhythm of protests that drew 240 000 people across Brazil the previous night, with small bands of radicals splitting off to fight with police and break into stores.

Mass protests have been mushrooming across Brazil since demonstrations called last week by a group angry over the high cost of a woeful public transport system and a recent 10-cent hike in bus and subway fares in Sao Paulo, Rio and elsewhere.

The local governments in at least four cities have now agreed to reverse those hikes, and city and federal politicians have shown signs that the Sao Paulo fare could also be rolled back.

It's not clear that will calm the country, though, because the protests have released a seething litany of discontent from Brazilians over life's struggles.

Yet, beyond complaints about the cost for bus and subway rides, protesters haven't produced a laundry list of concrete demands.

Deep-seated anger
Demonstrators mainly are expressing deep anger and discontentment – not just with the ruling government, but with the entire governing system.

A common chant at the rallies has been "No parties!"

"What I hope comes from these protests is that the governing class comes to understand that we're the ones in charge, not them, and the politicians must learn to respect us," said Yasmine Gomes, a 22-year-old squeezed into the plaza in central Sao Paulo where Tuesday night's protest began.

President Dilma Rousseff, a former leftist guerrilla who was imprisoned and tortured during Brazil's 1964-85 dictatorship, hailed the protests for raising questions and strengthening Brazil's democracy.

"Brazil today woke up stronger," she said in a statement.

Yet Rousseff offered no actions that her government might take to address complaints, even though her administration is a prime target of demonstrators' frustrations.

Confederations Cup
The protests have brought troubling questions about security in the country, which is playing host this week to soccer's Confederations Cup and will welcome Pope Francis in July for a visit to Rio de Janeiro and rural Sao Paulo.

Brazil's media has scrambled to cover the sprawling protests – coverage that in some cases raised the ire of protesters, in particular that of the powerful Globo TV network.

Whenever what appears to be a Globo helicopter swoops over a demonstration, protesters hiss, raise their fists and chant slogans against the network for what they say was its failure to widely show images of a violent police crackdown on protesters last week in Sao Paulo.

Brazilian demonstrations in recent years generally had tended to attract small numbers of politicised participants, but the latest mobilizations have united huge crowds around a central complaint: The government provides woeful public services even as the economy is modernizing and growing.

Yet public services such as schools are in sorry shape.

The Organization for Economic Co-operation and Development found in a 2009 educational survey that literacy and math skills of Brazilian 15-year-olds ranked 53rd out of 65 countries, behind nations such as Bulgaria, Mexico, Turkey, Trinidad and Tobago, and Romania.

Many protesting in Brazil's streets hail from the country's growing middle class, which government figures show has ballooned by some 40 million over the past decade amid a commodities-driven economic boom.

They say they've lost patience with endemic problems such as government corruption and inefficiency.

Money wasted
They're also slamming Brazil's government for spending-billions of dollars to host next year's World Cup soccer tournament and the 2016 Olympics while leaving other needs unmet.

A November report from the government raised to $13.3-billion the projected cost of stadiums, airport renovations and other projects for the World Cup.

City, state and other local governments are spending more than $12-billion on projects for the Olympics in Rio.

Nearly $500 million was spent to renovate Maracana stadium in Rio for the World Cup even though the venue already went through a significant face-lift before the 2007 Pan American Games.

Attorney Agatha Rossi de Paula, who attended the latest protest in Sao Paulo along with her mother, called Brazil's fiscal priorities "an embarrassment."

"We just want what we paid in taxes back, through health care, education and transportation," said the 34-year-old attorney.

"We want the police to protect us, to help the people on the streets who have ended up with no job and no money."

Use of social media
Although a single group set the protests in motion with its demonstrations last week calling for lowered transit fares, the mass gatherings are showing no evidence of any central leadership, with people using social media to call for marches and rallies.

Groups of Brazilians also staged small protests on Tuesday in other countries, including Mexico, Portugal, Spain and Denmark.

A cyber-attack knocked the government's official World Cup site offline on Tuesday, and the Twitter feed for Brazil's Anonymous hackers group posted links to a host of other government websites whose content had been replaced by a screen calling on citizens to come out to the streets.

Tuesday night's march in Sao Paulo started out peacefully but turned nasty outside City Hall when a small group lashed out at police and tried to invade the building.

Different groups of protesters faced off, one chanting "peace, peace" while trying to form a human cordon to protect the building, the other trying to clamber up metal poles to get inside.

At one point, one person tried to seize a metal barrier from another who was trying to use it to smash the building's windows and doors.

The air was thick with police pepper spray and smoke after demonstrators set a TV satellite truck and a police lookout booth on fire. – Sapa-AP