Making the sex change from John to Carol 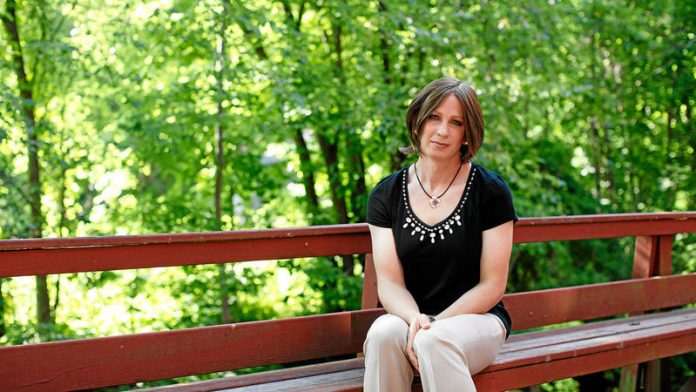 She starts her day in dad-mode, roughhousing with her son then making breakfast for her South African wife. In the downstairs bathroom she swallows her hormone pills, applies lipstick and eye make-up, changes into a skirt and pumps and – making sure the kids don't see her – escapes out of the back, en route to her therapist.

An hour later, in her car, she scrubs off the make-up, takes off the wig and clambers into male clothes. Her stride longer, her voice deeper, she walks into her working day as a senior, male, engineer at a major Boston firm.

Later Holly – a married father going through gender transition – slips on the high heels, the dress and the step-out wig and hits the town.

These are her best days: when she gets to make pre-breakfast visits to the perfect suburban American family home she has built as "John” over the past decade. (She plans to make Carol Holly her legal name next year, but her South African name, and that of her wife, "Sue”, have been changed here to protect the identities of the children and their mother.) At the end of those days, she goes to her new "digs” alone, cries a little, thinks about the surgery to come, and wonders what she'll be wearing to church.

John thought he'd taken the plunge of his life in 2001. He and Sue, a teacher, packed up their two small children and their lives in Grahamstown and moved to Boston. Their daughters are now 16 and 13 and their son, born in the US, is 10.

Armed with a master's degree in chemical engineering from Wits, John had a running start in his race for the American Dream. Just over a decade later the 42-year-old was the proud father of three children, the owner of a R5.5-million home in the suburb of Newton, an executive who travels the world for his company, and husband to a wife he still calls "my best friend”.

Doomsday decision
On March 1 this year he threw it all away. Doomsday, as he called it, was the day John separated from his wife and had to say these impossible words to his children: "Over the next year I will be slowly changing my body into that of a woman.”

Lida Lovelace, a team manager at Google's Boston headquarters and a "recent post-op” transgender woman, is the friend who is mentoring that change.

On her very first day at Google four years ago, the 59-year-old disclosed her status. "I walked right into the human resources manager's office and said: ‘I am transgender and I want to transition in the workplace.' The manager said: ‘Okay – let's get you started then.'”

That progressive response to Lovelace's request has since triggered a dozen new lives and identities in Boston, including Holly's.

In her blog, "Cazzi's Corner”, Holly describes the agony and guilt of decades of "gender dystopia”, and her bid to escape it. This is how she wrote about the run-up to "Doomsday”: "Hours. They tick down. The last few in this house as an owner, as a father, as a husband, as a welcome person. After this I'm an outcast. Disqualified by a medical diagnosis. ‘I'm not a lesbian' (my wife now says). ‘Well if it's any consolation, I don't think I am either, my dear.'”

Holly says now: "And that was it. Twenty years, three kids, huge adventures together, dreams of growing old hand-in-hand. Over.”

Holly says Sue had been both angered and sympathetic about her "existential angst” last year and admits she clung to the hope that they could somehow stay together. "The romantic in me hoped we'd find a middle road still; maybe not married, but still staying together for the kids.”

The couple is now going through a complicated divorce.

Tough decision
"I understand that my decision might seem selfish or destructive, and the worst of it has been distressing my children, but this is the person I have to be,” Holly says. "I like Carol. Carol is funny and engaging. I don't particularly like John; and I was flat-out unhappy as a man. I've made more friends in the last six months than I did in 20 years of marriage; 20 years of pretending.”

Holly grew up in a "normal” suburban South African household, with a "distant, authoritarian” father.

"My earliest memories of cross-dressing were when I was about six,” she says. "My 10-year-old sister's panties were on the bed; I snuck them on over my own underwear and under my shorts and then played happily with my four-year-old brother until he asked me why I was wearing frilly underwear.”

Holly says she has never been gay, and only now – after her identity transition and months of hormone replacement therapy – has she started to find men attractive.

"I was basically asexual,” she says.

She avoided rugby at Grahams–town schools by taking computer science as a seventh subject in the afternoons. But she "overcompensated” later by becoming a bodybuilder.

"The constant guilt drove me to explore hard-core Christianity and I became born-again at the age of 16,” she says.

Holly met and fell in love with Sue at Wits. "I was terrified of being alone and I hoped marriage would cure me, and here I'd found a real partner,” she says.

"We didn't particularly want to emigrate, but then we had our first child, and people in our church were getting carjacked, and suddenly it became something we needed to look at.”

US vs SA
​She says the desire for gender transition was not the reason for the move, but admits that she feared ridicule in South Africa if she was ever able to make the change.

The US, she says, despite the fact that the gay rights agenda has made major strides recently, is no more receptive to transgender people than South Africa.

In terms of US laws Holly must go a full year as "a fully transitioned woman” before doctors will consider sexual reassignment surgery for her. "Plus, I'll need the go-ahead of two independent psychologists,” she says.

She pauses, uncomfortable when asked to discuss the details of the surgery, but allows that it involves inverting the skin from the male genitalia into new female parts. She claims that successful surgeries can even fool gynaecologists at first glance.

First, she'll grow breasts with hormones, and plans minor cosmetic surgeries to her face "and to get rid of my Adam's apple”.

While she has received "unconditional support” from her South African family, she says it's been "very tough” on her children. They have been going to counselling, although the focus has been on the separation. Holly says she expects months, if not years, of thick-skinned devotion to repair relations with her two teenage daughters, who, she says, now greet her with "rolled eyes and sighs”.

Her male disguise, she says, has slipped a few times at work — forgetting to remove eyeliner, waiting a reflexive second for her chair to be pulled out for her.

"I think some people are getting suspicious,” she says.

She plans to announce the change to her bosses early next year; a moment that will start the clock on her year as a woman to qualify for surgery. Thanks to the inspiration of Lovelace's experience at Google, Holly doesn't fear that moment the way she dreaded the announcement to her children.

For now, she's focused on the "absolute relief” of being accepted as a woman in social settings, if not yet in the workplace.

"When it comes to ladies' bathrooms, teenage girls are the worst – they watch everything and can usually spot an early trans person a mile away, but I've been preening right alongside teenagers, and they're oblivious,” she says.