No reprieve from hostility in Dube 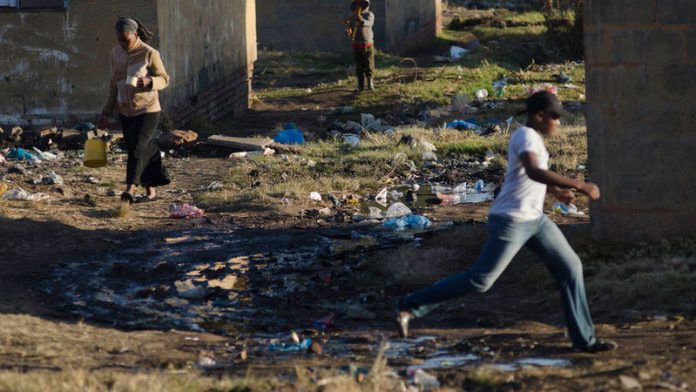 Illegal power lines crisscross the roofs of the Dube hostel in Soweto like washing lines. The power is being drawn from sections of the hostel that have electricity, a situation that led to power failures – and protests – last week.

The protests saw streets barricaded. Cars and a KFC were stoned on June 20. Residents said police had been driven back by gunfire coming from the hostel and refused to enter the area until a tactical response team arrived to disperse the crowds. Angry residents marched to the house of ward councillor Matlakala Sefolo-Mamabolo on June 23.

The protests are the culmination of a long-running stalemate between hostel residents and the Gauteng department of housing.

Dube hostel – a vast complex of dilapidated brick buildings in rows – has no waste collection services. There are damaged water pipes and broken toilets. In a vast, illegally electrified section of the hostel known as "ehlanzeni” [an isiZulu euphemism for "bush”], water from an ancient-looking communal tap has created a swamp of flotsam.

By the looks of things, conditions have worsened as the standoff matures. Winter means more power cuts and more pressure is put on the already stressed supply.

Political neglect
Phathokwakhe Dladla, one of Dube hostel's leaders, believes that hostels in general – and Dube in particular – are neglected for political reasons.

"Inkatha's foundation and bedrock is in the hostels, and they say we are the ‘boss' hostel. The ward councillor said she will not set foot in an IFP [Inkatha Freedom Party] stronghold.”

This perhaps explains the view of mayoral committee member Dan Mbovu. He said the government has decided to pursue the renovation of other hostels in Soweto, where residents are more agreeable, and leave Dube for last in the hopes that the progress elsewhere might spark an exodus.

From his office in Braamfontein, with a view that takes in the afternoon commute in Newtown, the burly Mbovu talks about the complex of flats built adjacent to the hostel by the Gauteng department of housing in 2007. It is still unoccupied because residents have vowed that if they can't move in, no one will.

He said the development was initiated by the provincial housing department to "change the look of hostels”, moving towards family units but still allowing those who wanted to live in single apartments to do so.

"The leaders and indunas were consulted and Gauteng resolved to use another type of funding, the CRU [communal residential units].

"That approach has laws saying you can't transfer it. You must recoup what the government put into it, meaning that it is rental accommodation. This means that most people are remote residents. They are not permanent. That's why this subsidy was used,” said Mbovu.

"In Dube, they said that no leader had come to them [to tell them that]. I don't know why because they were told.”

Mbovu said that the housing department had set rent at R750 – a price that hasn't changed since 2008. Despite the "subsidy”, this was still unaffordable for most of the inhabitants.

"Residents can apply with the mayor to find out whether we can subsidise the rent or not. If you look at the surrounding area, there are people living in backyards, in some cases [in] worse conditions. They are paying between R800 and R1 500. But we're saying we'll allow talks to continue.”

Solutions
When Mbovu visited the hostel in the winter of last year, he seemed to acknowledge that the standoff emanated from the provincial government.

"We must go back to the premier who was there at the beginning and fix it from there and see whether we can reduce the fees,” he told an audience of about 500, who had gathered at an amphitheatre on the hostel's grounds on a windy, sunlit Saturday.

"Because the aim is to improve the situation, I hope we can discuss rent-to-buy or lower rent.”

Mbovu seems open about the province's limitations, saying the plan was to demolish and rebuild to accommodate everyone, but the current plan does not cover everyone.

"Phase two and three will feature everyone … We can't build for [Dube hostel residents] alone if we are serious about integration. Space must be allocated for people from surrounding areas and the Dube hostel.”

I ask him whether there is a political motive for the "integration talk”, to disband areas considered to be the last remaining bastions of the IFP.

As if he is oblivious to the question, Mbovu segues into the 96-97 Campaign, a citywide initiative by the City of Jo'burg that kicked off this month in Soweto. The door-to-door campaign will verify the credentials of the 1996 and 1997 applicants for RDP houses, to give those who missed out then first preference in future residential development projects. For IFP Gauteng legislation caucus leader Bonginkosi Dhlamini, the campaign is yet another way of sidelining hostel residents.

"[The campaign suggests that] they acknowledge that there was a problem with the [initial RDP waiting] list. How can a hostel person jump the queue? What would make a hostel person – someone without even a C-form [an RDP application form] —get preference? The survey was part of the registration [process].”

The "survey” Dhlamini refers to was a socioeconomic study conducted about six years ago, prior to the erection of the first phase of the development around the hostel.

"The survey, which was conducted in all nine hostels in Soweto, found that 70% of the respondents qualified for RDP housing, with the remaining 30% either qualifying for rental housing or bonds, or already in possession of an RDP house."

Basic rights
Ninety-eight percent of the people who qualified wanted family units and ownership of those units.

"Now they don't want to listen to the findings of their own survey,” says Dhlamini. "What we're saying is, as much as we appreciate the development and think it's a good thing, it is against the outcome of the survey. They want to impose their will on the people."

"So people from the hostels have become victims twice. They were victims of influx control because they didn't choose to live there … and now the government wants to perpetuate their status as visitors.”

The hostel was built in 1955 for workers evicted from urban areas under the Native Urban Areas Amendment Act. It was informally known as the "Locations in the Sky Act” as it primarily targeted Africans working as cleaners who lived in servants' quarters on the tops of buildings in town.

Dhlamini's analysis of the problem is that it is political, and driven by a deep-seated attitude towards hostels.

"Let's say hostel people are as bad as people say – violent and so on. If the ANC can find it within its conscience to forgive, reconcile [with], swallow and be comfortable with the Nationalist Party in its belly, why can't they reach out to their own black brothers who were oppressed by apartheid just like them. For me this is nothing but political punishment.”

Dhlamini proposes a hostel forum comprising residents, councillors, city and provincial officials, where people sit down and listen to each other.

"Right now they are trampling on people's constitutional rights — and hostel people are not chicken; they will fight for their rights. We are encouraging them to use legal means.”

The evolution of backpacking

Editorial: Where are the police?

Still no convictions, despite statements from 50 victims in which the same perpetrator is named.
Read more
National

The calm prevailing at Dube Hostel hinges on whether the electricity problems it is experiencing can be fixed for good, according to hostel leaders.
Read more
Business

The hostel systems of the past have to be replaced by housing with one individual per room, writes Johann Barnard.
Read more
Opinion

The Inkatha Freedom Party in Gauteng has welcomed the investigation by the M&G into the hostel situation faced by numerous families in Soweto.
Read more
Advertising