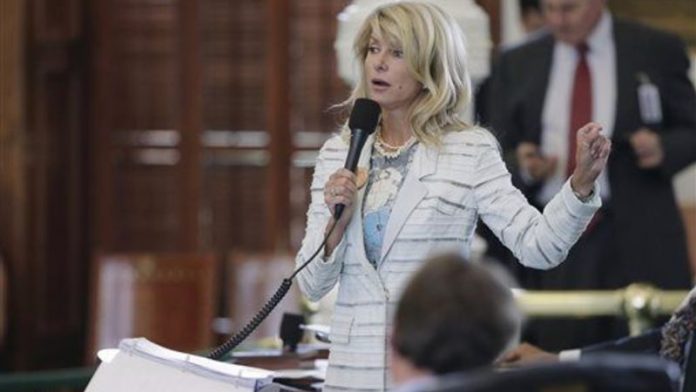 It wasn't Wendy Davis's first filibuster. In 2011 the Texan senator stymied Republican legislative plans by filibustering for more than an hour, forcing the Texas governor and former presidential hopeful Rick Perry to call a special session to keep his party's austerity finance bill in play. He described her tactics as those of a show horse.

But on Tuesday night the 50-year-old Democrat outdid her previous efforts by speaking for nearly 11 hours to succesfully derail an anti-abortion vote, without a break to eat or go to the bathroom, all while wearing pink trainers.

Davis's rise to national prominence this week was by no means assured. In a state dominated by Republicans, the Democrat barely scraped electoral victory in 2008 and then managed to fight off plans to rezone her 10th district ward in a more conservative area in 2012.

She is no stranger to struggle. Davis was working at the age of 14 selling subscriptions for her local newspaper and then selling juice drinks at an Orange Julius outlet in a shopping mall to support her single mother and three siblings.

By 19 she was divorced and raising the first of her two daughters in a trailer park. Despite this she went on to graduate first in her class at Texas Christian University and then won entry to Harvard Law, commuting between Fort Worth and Boston for three years.

She then acted as a clerk and eventually launched her own practice for federal and local government affairs and real estate.

With an interest in running and cycling, and wearing pink trainers, Davis was well-prepared to stand and talk for hours on end – official rules do not allow those who filibuster to sit, take rest or toilet breaks, or lean on furniture for support.

Her epic filibuster attracted wide support on Twitter, where supporters used the hashtag #standwithwendy. US President Barack Obama joined in, tweeting that "something special is happening in Austin tonight". Within hours her Twitter followers had surged from 1 200 to more than 57 000. –  © Guardian News and Media 2013