Morsi remains stubborn: What happens next in Egypt? 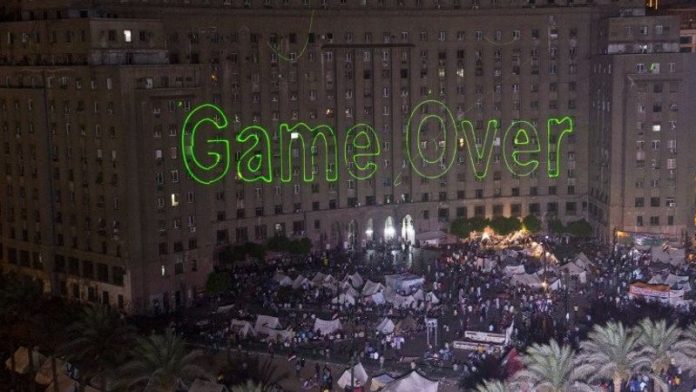 In a televised address early on Wednesday, the embattled Islamist leader said he was freely elected to lead the troubled nation little more than a year ago, and intended to stick to his task. The only alternative to respecting the constitutional legitimacy of the office was further bloodshed on the streets, he warned, adding that he stood ready to "give my life" to defend constitutional legitimacy.

Egypt's media have already quoted military sources speaking of the possibility of large-scale bloodshed and "signs of state disintegration". Parallels have been drawn with Algeria in the early 1990s before it descended into civil war, though some see this as scaremongering. But the army, scarred by the unhappy experience of its 16-month rule after the downfall of Hosni Mubarak, is likely to be reluctant to assume direct power. It will prefer to stay in the shadows and mediate.

Silent coup
Morsi agrees under army pressure to call new presidential elections. Some Islamist figures have mooted dates ranging from October to January – provided they come second to new parliamentary elections that the Brotherhood leadership must hope would give them a majority sufficient to compose the next government – the current lower house of Parliament is suspended. But that is likely to be far too leisurely a pace for Morsi's critics.

Another variant is the idea of holding a referendum on whether to told a new presidential race. The ultra-conservative Salafi Noor party (flanking the Brotherhood from the right and protesting that it is not doing enough to promote sharia law) supports this. The mass protest movement Tamarod (Rebellion) says Morsi must go and wants early presidential elections, with the head of the supreme constitutional court serving as acting president in the interim. Opposition forces say they don't trust any vote held under the rule of the Brotherhood.

Negotiations and stalemate
Morsi, taking heed of the army's 48-hour warning about its own "road map", invites the leaders of opposition forces to join a power-sharing unity cabinet to promote national reconciliation and review the constitution that was passed last year. Success is not guaranteed. Simply shuffling the cabinet and appointing a new prime minister is unlikely to assuage public anger towards the president.

The National Salvation Front leaders Amr Moussa (a presidential candidate last year) and the Nobel laureate Mohammed ElBaradei might well want to run for power with military backing or acquiescence. It is hard to see them resiling from their demand that Morsi goes. The former air force general Ahmed Shafiq, now exiled in the UAE and seen as the candidate par excellence of Mubarak-era counter-revolutionaries, may harbour ambitions too after being narrowly beaten by Morsi in a runoff last summer. Protests and deadlock look certain to continue. – © Guardian News and Media 2013, AFP