Is it the end of the art world as we know it? 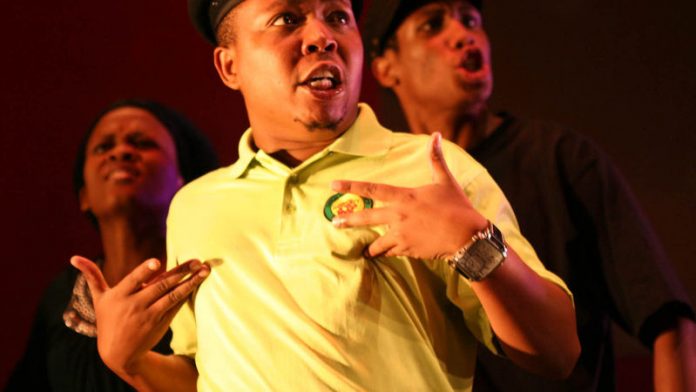 Apocalypse has come to mean the end of a world. But before its current iteration, the word used to mean unveiling.

Revelations, the last book in the Bible, certainly hasn’t helped matters much. It’s the book in which all the pieces and puzzles of the Bible should come together in a revelatory end. But far from doing that, whoever wrote it (thought to be St John) doesn’t jumble the pieces of the puzzle so much as discard some of them altogether, leaving one even more confused.

It’s in the spirit of St John, the demented mystic stranded on the island of Patmos, that one could choose to see this year’s festival as an apocalypse; apocalypse as both the fire-and-brimstone end of the world and the simultaneous unveiling of a new one.

Which is, in many ways, how the nation has been feeling in the past month as we grudgingly accept that the patriarch Nelson Mandela isn’t going to be there forever. Whatever it is that Mandela means, it’s forcing us to contemplate a future without him.

But back to Grahamstown, the colonial world that the superman Mandela single-handedly (irony alert) dismantled, which gets some form of treatment from Mbongeni Ngema.

The actor and musician returns to the 39th National Arts Festival stage, after almost three decades, in The Zulu, a 90-minute oratorical — as opposed to a theatrical — tour de force. He reminisces on the birth — and death — of the Zulu nation by invoking the tales told to him by his blind great-grandmother.

Excavating the intrigues and the brutality of the Zulu royal court, and the encroachment of the British, he shows the end of one world and the beginning of another, one to be watched over and controlled by British colonists.

One could say Rhetorical is in many ways about the end of one world and the beginning of another.

If Mandela is Jesus, then former president Thabo Mbeki is St Paul, the theorist and the real architect of Christianity.

It’s not Mandela’s but Mbeki’s fingerprints that are all over the post-1994 project.

It is the new South Africa presided over by Mbeki that is the subject of the play Rhetorical. Directed by Paul Mpumelelo Grootboom and Aubrey Sekhabi, the production explores the enigma of the ANC’s 11th president through his speeches.

If the ANC expects to be a vibrant presence in 100 years’ time, one issue it has to address is corruption.

That’s the subject of Secrets from the Drawer, a production written by Neil Coppen, a past recipient of the Standard Bank Young Artist award for theatre, and directed by Musawenkosi and Bongumusa Shabalala. It explores a small-time, corrupt local bureaucrat, Dumisani Khu-malo, and the unintended but predictable effects of his actions.

The macabre story is explored through the demented imaginations of a mortician, reimagining the lives of the people whose bodies he prepares when this life has ended and another world beckons yonder.

It is the theme of Wednesday Night, which is directed by Princess Mhlongo, yet another past winner of the Standard Bank Young Artist of the Year gong.

It’s principally about four women and Mandla, a tenderpreneur. Mbali is married to Mandla; her friend Claire dies in a construction industry accident involving one of her husband’s projects.

Is he responsible for Claire’s death and the subsequent unravelling that happens to his wife?

There is a similar but different moral conundrum: a cop accepts a bribe from a drunk driver who then crashes into a pole a kilometre away, killing himself.

Is the police officer responsible for the man’s death? What if he had issued a ticket that night? Would that have stopped the man from getting himself killed the following weekend in yet another drunken excursion?

Wednesday Night is a subtle, thoughtful production that has gone beyond the millennial big narratives to examine the minute real lives and the consequences of our actions.

The Last Show is a loopy, oedipal family drama written by Jemma Kahn. It examines a woman and her son as apocalypse ever so slightly edges closer to their stoep.

Set in Brixton, Johannesburg, far away from their Dainfern home, in the north of Johannesburg, the drama shows what happens to a diseased mind. It reminded me of that man in the proverb who believes so much in his bad luck that when he gets flu he takes it to be pneumonia. And then when he goes to the doctor it turns out he indeed has developed pneumonia.

My sense is that this year’s festival is low-key and rather subdued.

Lankester, like any bureaucrat, dismissed my feeling as anecdotal; he dealt in hard numbers and there was nothing in the figures to suggest the end of the world.

Even though Lankester thought that the festival might not break the record 216 000 ticket sales of last year, he was quite confident the event would get at least 200 000 in ticket sales.

The price of fuel is going up soon, he said ahead of the latest hike in the price of fuel. And Mandela’s lingering illness has “affected the mood of the people. Everyone is more sombre and serious.”

Whatever happens with Mandela, the known world has ended and who knows what the form of the new world will be?