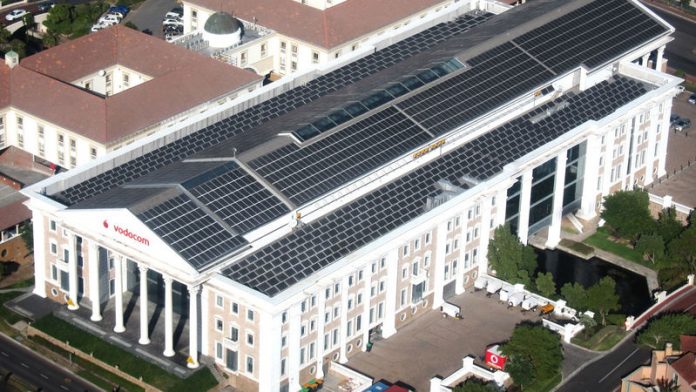 In an effort to reduce its carbon footprint by 5% a year, Vodacom fitted its Cape Town office with the largest array of solar panels on a rooftop in Africa. The system is able to supply up to 75% of the total power required in the building.

At its base stations in rural areas, the mobile communications company uses renewable energy generation and supplies excess power to communities living off the grid.

In Emfihlweni in northern KwaZulu-Natal, villagers' lives have changed since 25% of the electricity generated by Vodacom's base station is used to power the community water pump, a local shop that provides a cellphone-charging station and a computer centre at the local high school.

"Powering rural communities with excess energy from our green base stations is a game changer for areas that have no access to power.

These efforts were recognised by the environmental investment organisation, an independent global research body that promotes carbon transparency and investment solutions designed to address climate change.

Earlier this year the organisation scored Vodacom among the top 10 companies in its 2013 Carbon Ranking of 300 large companies from the Brics countries.

De Jongh said in 2009 Vodacom committed to take proactive measures towards reducing its energy consumption, and in 2011 set a target of reducing its carbon footprint by 5% a year.

To meet this goal the company has invested in new technologies, replacing traditional air-conditioning with tri-generation, thermal storage plants and free cooling.

Its base stations use alternative energy sources such as battery-powered hybrid units as well as wind and solar generation.

"We are rolling out energy efficiency projects at all our buildings and campuses," he said. "Existing lighting, for example, is being replaced with new occupancy-sensing and daylight-harvesting technology."

Savings of 100 megawatt hours a month have been realised so far, with more expected as projects in progress are completed.

The system is capable of producing three-quarters of the building's power requirements at peak times, said De Jongh.

"That translates to 542 kilowatts, an annual energy yield of 830MW hours and a CO2 reduction of 830 tonnes."

The project is part of Eskom's integrated demand management programme, which provides payment for customers that deliver verifiable energy savings, from 50kW to 5MW.

"On top of our Eskom agreement, Vodacom will save R1-million a year and five and a half years of project payback," said De Jongh.

No additional construction work was required to install the solar panels, reducing the indirect carbon footprint of the project, and all waste generated was recycled.

Every aspect of the installation was monitored and safeguards against back-feed on the grid were developed within the project.