How to grow your own grasshoppers 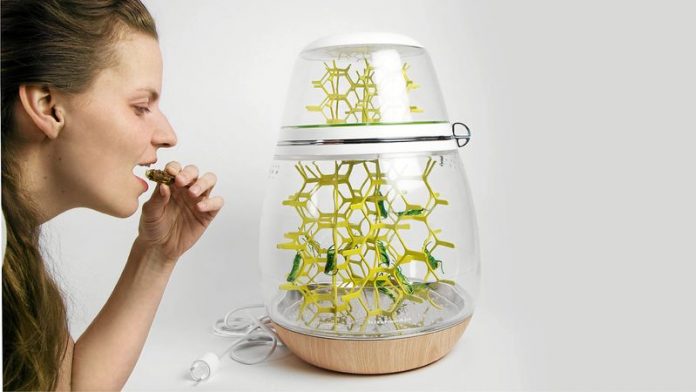 The terrarium-style insect breeder, known as the Lepsis, is designed to fit alongside other stylised kitchen gadgets.

Grasshoppers grow on a green hexagonal-patterned grid. Everything is visible through a transparent acrylic compartment.

Once they have matured, a bowl-shaped unit with a light is attached to attract and harvest them.

The crowded harvest unit is then removed and placed in a freezer in order to kill its contents and store them for future consumption.

The growing process is said to take about a month, and Ourasanah expects the Lepsis to yield as many as 100 grasshoppers a batch.

The design is among the finalists for this year’s Index: Award, presented in Denmark in August to honour innovative solutions to global challenges.

Ourasanah (28) spent the first 16 years of his life in Togo, where grasshoppers are an integral part of the diet. It was seeing the contrast in food habits when he moved to the US that made him ­reconsider the environmental impact of our consumption.

“I didn’t go into it thinking that I’m going to design something for people to eat insects,” he said.

“But I wanted to bring about a solution to food waste and the fact that we are not as connected to food as we used to be.”

A United Nations report published in May reiterated the case for humans eating insects amid the prospect of food shortages. According to the UN’s Food and Agriculture Organisation, more than two billion people already eat insects as part of their traditional diet. Insects are high in protein and low in fat.

With more than 70% of the world’s population expected to live in urban areas by 2050, Ourasanah wants the Lepsis to be a desirable design object that serves as a reminder to city dwellers about the processes of food production as well as transforming insects into a viable meat option.

While insects may tick the boxes for a lower ecological footprint, most people in the Western world remain unconvinced that a grasshopper can be as delicious as it is nutritious.

At the Nordic Food Lab in Copenhagen, a research facility set up in collaboration with the restaurant Noma, chefs and scientists have been studying the gastronomic qualities of insects and how to make them more desirable for Western palates.

“The main challenge is getting people to try the first one and have a positive experience,” said Ben Reade, a Scottish chef who works as the head of culinary research and development at the food lab.

“With grasshoppers you can roast them or fry them, or you can go wild with spice blends to decorate the flavour.

“The alternative is to do ­fermented sauces where they go on to create really great umami tastes. If we age them in the right way we can create an almost ­chocolate-like aroma from ­fermenting them.”

Reade said fried grasshoppers provide the ideal beer snack but suggested removing the wings and legs before cooking, or eating them at a subadult stage when the wings aren’t fully developed.

“We are trying to make it appealing to people. Not from some conceptual level or some kind of moral standpoint. No, eat this because it tastes good.” — © Guardian News & Media 2013