Waiter, open up a can of worms 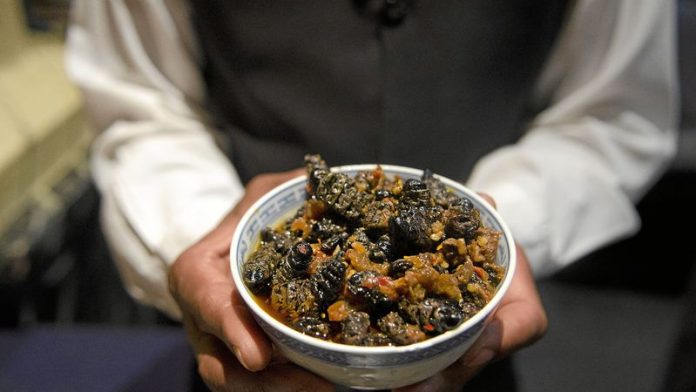 As our starters arrive, my dinner date purred in anticipation. I’m more reserved, but unlike her, this is not my first time.

There is no denying the species on our plates: plump mopane worms, served in a mild chilli sauce. The idea doesn’t thrill me much: I have nothing against insects, but this worm’s chewy, spicy sensation is definitely an acquired taste.

The waiter – we’re at Gramadoelas in downtown Jo’burg – assures me they are quite popular. They get a lot of tourists, he explains, and there are also regulars, some dining on the worms – a bargain at under R40 a plate – every week.

My date doesn’t share my lack of enthusiasm, clearing most of her plate as I laboriously poke and chew through a sampling of mine. And she is a considerably pickier eater.

That appetite may serve her very well in the future. A report by the United Nations’s Food And Agriculture Organisation puts it in stark terms: by 2050, with a projected world population of nine billion people, we won’t be able to feed everyone at current levels of food production.

Proponents of genetically modified foods argue that we have already surpassed the planet’s natural capacity for generating food, but even in the organisation’s “best case” scenario, production will need to double to meet demand 40 years from now.

Making insects part of our staple diet may be one solution to the looming food crisis.

On paper the benefits are considerable. There are about 1 900 insect species that can be consumed by humans, boasting levels of vitamins and minerals that easily match and even surpass the animals we’ve been eating for millennia.

And they are efficient – crickets, for example, convert 2kg of food into 1kg of protein. Size is also a factor: a 70cm x 50cm plastic container – the storage weapon of choice for many domestic organisers – can easily house thousands of mealworms.

There is even a concept called Lepsis, designed by Mansour Ourasanah and KitchenAid, that envisions us growing grasshoppers on our kitchen counters. Ourasanah chose grasshoppers because of their talent for breeding, laying thousands of eggs upon death. Imagine doing any of this with chickens and you can see the appeal.

Staple diet
The Guardian recently noted that insect snackers can be found in 80% of countries and the food and agriculture organisation report estimates that creepy crawlies are already part of the daily diet of up to two billion people – predominantly people living near jungles or in dry regions.

The mopane lives in the semi-arid belt north of the Soutpansberg, fried crickets are a favourite in foliage-heavy Thailand and Yemeni nomads are apparently the people to talk to for a good locust recipe.

Though people in these parts appear to eat insects out of dietary need rather than enjoyment, insects can be consumed for pleasure. Certain bars in Mexico serve dry crickets as you would a bowl of peanuts and a friend told me of a childhood acquaintance who liked flying ants squashed on bread.

Still, most peoples’ attitudes to eating insects tend towards the wrinkled-up nose and hollow retching variety.

My companion unleashed a photo of her mopane dish upon social networks. In no time the responses came, most calling her brave, several declaring their own disinclination towards such a meal.

Eating insects in this world is perhaps not far from being the only meat-eater in a commune of vegans. Some foodies might delight in such exotic meals, but if the brouhaha around horsemeat and donkey in your viennas serves as a thermostat, insects have a very steep hill to climb.

There are also other roadblocks: governments have yet to tackle matters such as health standards and sustainable practices.

There are alternative uses for insects, mainly to feed that which we eat.

Insects such as flies can be raised on different kinds of waste – in turn their maggots are processed and mixed into animal feed. It’s more economical and has also shown higher levels of vitamins and such in the consumers. For example, the eggs from chickens fed on certain insect feeds contain more Omega 3 fats than traditional sunny-side-ups.

Then there is a matter of volume. According to the Johns Hopkins Centre for a Livable Future, in 2004 the United States produced 108-million tonnes of feed for animals that end up on our plates. By 2011 this reached over 140-million tonnes – around 21% of global production. Much of the feed’s ingredients are sourced from land that could be diverted to feed humans.

And as we need more food we need more animals and those animals need more feed from more land. It’s a vicious circle with an all too obvious endgame. Somewhere insects need to help alleviate the pressure.

But for now they remain obscure.

Back at Gramadoelas the irony of resorting to à la carte dining to find the world’s potential staple diet saviour is not lost on us.

The benefits are clear: mopane worms, for instance, are both filling and cheap.

We ponder how they would be in a creamy pasta and discuss the weight-loss programme potential of a packet of dry worms as a low-fat, high-protein snack.

Would I recommend insects as a meal? Definitely. Would I always make a meal of it? Definitely not. In 50 years time, I probably won’t have a choice.

Regrettably, we learned this week that Brian Shalkof, co-owner of Gramadoelas restaurant, died following an attack in his home two weeks ago.

Lifetime Award for achievement by an individual

Editorial: Our moment of reckoning is now