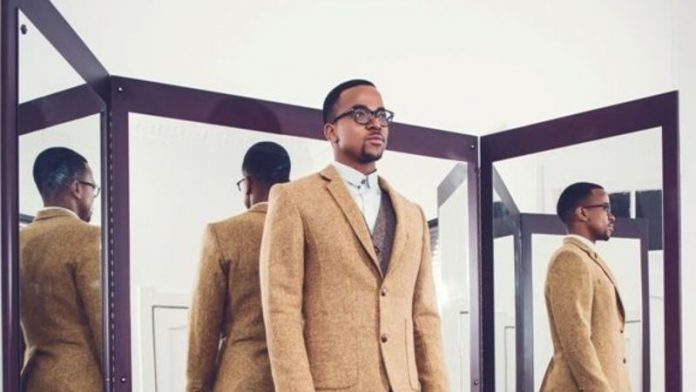 Maps Maponyane's charisma and presence cannot be ignored. His beguiling height, model good looks and distinguishable laugh makes him South Africa's current "it boy"  – seen at exclusive gatherings, mingling with prolific guests, creatives and celebrities. But is there more to him than his endearing charm?

The bespectacled socialite recently launched a debut menswear clothing range designed in collaboration with Augustine, a brand known for its bespoke clothing, at its store in the upmarket Johannesburg suburb Parkhurst. The lavish event featured a small crowd of influential guests such as trend analyst Dion Chang and the stylish photography trio I See A Different You. Being a fashion designer is a natural move for the man who is GQ magazine's 2011 Best Dressed Man runner-up and this year's Cosmopolitan Sexiest South African man.

Augustine and Maponyane's impeccable clothing range is titled OCD. "It's an extension of me. OCD is something I admittedly am. I can be pedantic and meticulous with everything I do. I have all sorts of weird habits and superstitions," says Maponyane.

According to the media personality, he will adjust a restaurant's table settings if it looks clumsy: straighten the condiments on the table, position the bottles so that the labels all face the same way. Even the volume of his music must be set at a particular number. "I have tendencies that make me edgy. It's who I am and I think it shows through my debut collection."

'I oversaw every little process'
His neurotic ways were evident from the beginning of the design process, he says. "I wanted to make sure I oversaw every little process. Even from the start when I was sketching, I wanted it to be the best I could do." His perfectionism runs through every item he's helped design with Justine Coetzer and Marea Lewis – head designers at Augustine. There's meticulous attention to detail on every garment such as the leather-lined pockets, tiny zips, delicate stitching, and floral lining and buttons on a rust burgundy suit. It is how a premium bottle of cabernet sauvignon would look if it was a handsome man in a tailored suit.

Having worked in the fashion industry as a model, it's sensible that he models his own clothing range. Perhaps his decision to model the collection also stems from his need to be involved in every aspect of the project. "I didn't want to do it to be the face of anything. I wanted to be involved in the design aspect and a menswear range is something I always wanted to do," he says emphatically, suggesting an urge to move away from being just a pretty boy.

His modesty at creating a successful menswear range in a fiercely competitive industry seems genuine, yet counterintuitive when he exudes such confidence. Maybe it's due to a combination of his struggle with sketching – he admits he's a bad sketch artist – and being taught the value of humility by his parents.

He cites the character of James Bond as an influence on his clothing range. "I've been watching the films since I was a child. My favourite [Bond] is Sean Connery."

Although Bond is a pop culture icon, Maponyane says he doesn't follow trends. "I wouldn't say I follow them avidly, but I like to keep an eye on what's happening."

'Made in Joburg'
Maponyane admires menswear designers such as Tom Ford and Paul Smith because "they always keep their designs sleek and clean with a modern edge". But he doesn't laud designers over quality. "I think men are wearing designer clothes just because of the designer, not because it looks good on them. The bespoke aspect and having it made to fit for you, makes you look good which is better than splurging on something that doesn't do you any justice," says Maponyane.

Speaking about working with Coetzer and Lewis to create a high quality South African product, Maponyane says: "We wanted to showcase how great the bespoke designers are in South Africa. If you look on the inside jacket it says 'Made in Joburg'. We have good local tailors and it's impressive."

Remaining loyal to his love of minimalism, I ask what Maponyane's ideal suit is. "It's sleek. It's minimal. It makes me feel good. It's very simple, but it speaks volumes with certain intricacies in the suit. It's very well thought out. Let the clothes speak for themselves. I think they are well spoken enough."