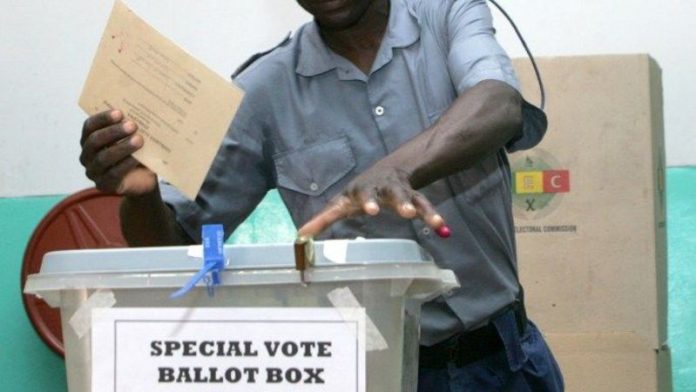 Scores of uniformed police officers waited outside polling stations on Sunday after the Zimbabwe Electoral Commission (ZEC) failed to deliver voting material which was still being printed.

"This is the clearest manifestation of lack of readiness on the part of ZEC to conduct a credible poll," said Prime Minister Morgan Tsvangirai's Movement of Democratic Change (MDC).

"As a party we are concerned that if ZEC cannot manage 209 centres for this special vote, how will they manage over ten thousand polling stations on July 31 2013?" According to the country's electoral body, about 87 000 people, largely from the police service which will be on duty on election day, had applied to vote on Sunday and Monday.

Only 6 092 ballot papers had been distributed by Sunday's polling, ZEC deputy chairperson Joyce Kazembe told a press conference in the late afternoon.

Kazembe blamed the slow start to voting on printing delays which she said were "even beyond our expectation".

Ballot papers were still being printed, she said.

Turned away
An AFP reporter witnessed voting under way at only two of four vote stations visited.

Hundreds of uniformed police officers waited dejectedly at one site as late as 4pm for their names to be called out to cast ballots under the watch of regional monitors.

Some were turned away as their ballot papers had not arrived.

At another polling station in the capital, no ballots were being cast at 1pm (11am GMT) as there were no vote papers.

The month-end crunch vote will replace the uneasy unity government between rivals President Robert Mugabe (89) and Tsvangirai (61) that was forced by chaotic 2008 polls.

Twitter users expressed their concerns that Sunday's showing was a foretaste of what is to come.

"If today's #ZEC system failure is anything to go by, on 31 July there'll be irreparable organ failure," tweeted one person.

Another user said: "this is just an insight of what July 31 will be like … #ZEC cant handle 8 7000 voters wat of the 6-million." But Kazembe said the ZEC will be ready.

"Let me assure you by the end of next week all the ballot papers would have been prepared. We promise the nation that we will be ready," she said.

Lack of ballot papers
A live report on the website of the state-controlled the Sunday Mail outlined voting material – from ballot boxes and the voters' roll to ink – failing to arrive at different sites across the country.

One station had only taken delivery of just 14 ballot papers, while another had only one paper.

The ZEC said voting was taking place in nine of Zimbabwe's 10 provinces, but no figures were given of how many of the 209 vote stations were operational.

The July 31 date was set by Mugabe and a court later ruled that it would go ahead despite the veteran leader asking for a two-week delay after a regional bloc pushed for more time.

Tsvangirai, who accuses Mugabe and his allies of failing to implement promised reforms, had wanted an even longer extension.

The High Court in Harare will on Monday hear a court challenge from the MDC over the special poll's voters roll which they claim is inflated.

The party is seeking "to nullify the voting process today and tomorrow," lawyer Harrison Nkomo said.

Run-off
Tsvangirai won the first round of the 2008 presidential vote, but pulled out of a run-off amid violence against his supporters.

Some 200 opposition activists were killed around those polls.

Security chiefs have openly showed support to Mugabe of the Zanu-PF party and have blasted Tsvangirai as a stooge of the West.

The security forces, which fall under Mugabe's control, have in the past been accused of rights abuses and intimidating political opponents. – AFP

International crimes must be prosecuted and domestic jurisdictions are well placed to do this. Domestic prosecutions based on universal jurisdiction are on the rise
Read more
Advertising
Continue to the category
Africa