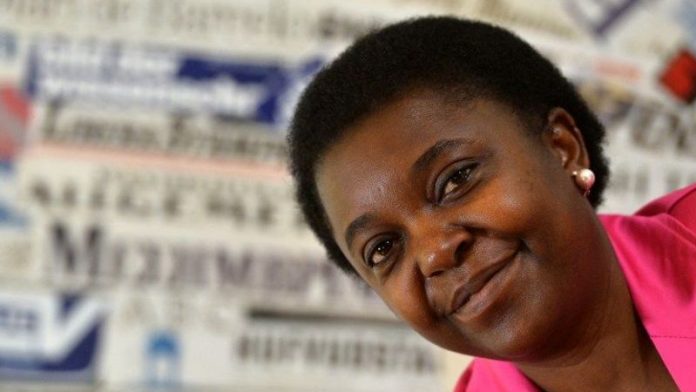 Cécile Kyenge, an eye surgeon who was born in the Democratic Republic of the Congo and has Italian citizenship, has faced repeated racial slurs and threats since being appointed minister for integration by Italy's Prime Minister Enrico Letta in April.

She was once again on the receiving end of grossly offensive comments on Saturday when Calderoli, a former minister under Silvio Berlusconi and senate vice-president of the Northern League, told a rally in the northern town of Treviglio that Kyenge would be better off working as a minister "in her country".

According to the Corriere della Sera, which reported the event, he added: "I love animals – bears and wolves, as is known – but when I see the pictures of Kyenge I cannot but think of the features of an orangutan, even if I'm not saying she is one."

The remark provoked horror from the rest of the Italian political class, especially in Kyenge's centre-left Democratic party. In a statement, Letta said the remarks were unacceptable. "Full solidarity and support to Cécile," he added.

Saddened
Asked about the comments, Kyenge said it was not up to her to call on Calderoli to resign, but hoped all politicians would "reflect on their use of communication". "I do not take Calderoli's words as a personal insult but they sadden me because of the image they give of Italy," she told the Ansa news agency.

Ever since she was made minister in Letta's fractious grand coalition government, Kyenge (48) has been the target of much criticism from the League. Some of it has been directed at her policies, particularly her desire to change a harsh citizenship law to make it easier for Italian-born children of foreigners to gain full nationality before they are 18.

But some of it has been very personal – and vitriolic. Mario Borghezio, a member of the European parliament for the League, said in April that Kyenge wanted to "impose her tribal traditions from the Congo" and branded Letta's coalition a "bongo bongo" government. "She seems like a great housekeeper," he added, "but not a government minister."

In June, a local councillor for the League was ejected from the party after she posted a message on Facebook suggesting Kyenge should be raped. Referring to an alleged attempted rape in Genoa, Dolores Valandro wrote: "Why does no one rape her, so she can understand what the victim of this atrocious crime felt?"

'Only joking'
Asked on Sunday to explain the latest slur, Calderoli insisted he had been joking. "I was speaking at a rally and I made a joke, an unfortunate one perhaps," he told Ansa. "I did not want to cause offence and if Minister Kyenge has been offended I apologise but my joke came in the context of a much broader political speech that criticised the minister and her politics."

This is not the first time that the 57-year-old has caused controversy. In 2006 he quit the government after going on television in a T-shirt emblazoned with cartoons of the prophet Muhammed – a move credited with inspiring deadly riots outside the Italian consulate in Libya.

Later that year, after Italy's football team beat France in the World Cup, he said the opposing side had been made up of "niggers, Muslims and communists".

In 2007, he called for a "Pig Day" protest against the construction of a mosque in Bologna. – © Guardian News and Media 2013