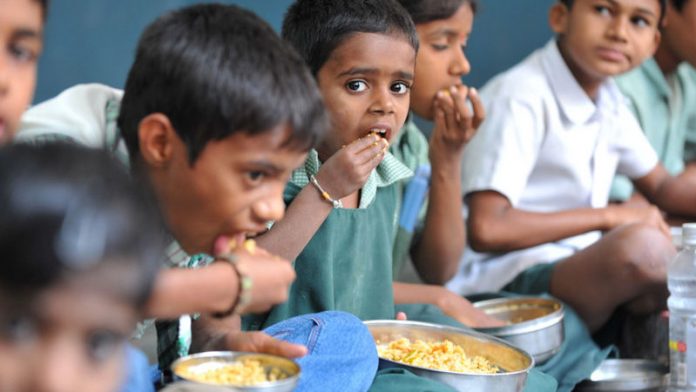 Authorities were trying to reassure frightened students and parents in the state of Bihar as police stepped up their investigation into the tragedy, focusing on the school headmistress who has fled.

The 22 children, aged four to 12, died after eating lentils, vegetables and rice cooked at a village school on Tuesday, sparking violent protests from angry residents.

Some 30 children remain ill in hospitals in the state capital Patna and the city of Chhapra after eating the food, which initial tests showed may have been tainted with insecticide.

Children elsewhere in the state were dumping their meals in bins or refusing even to touch them, despite pleas from school officials that the tragedy would not recur, a senior state government official said.

"Parents have warned their children to not even touch the meal served in the school," Lakshmanan, who uses only one name, told AFP.

Not to be repeated
"Some of the students dumped the lunch in school dustbins and we are trying to convince everyone that the tragedy will not be repeated," said Lakshmanan, director of the midday meal scheme in Bihar.

Educators see the scheme as a way to increase school attendance, in a country where almost half of all young children are undernourished. But children often suffer from food poisoning due to poor hygiene in kitchens and occasionally sub-standard food.

Authorities have instructed all teachers and cooks in the state to first taste the free lunch before serving to the children.

"We will have to make parents believe that mid-day meals provide nutrition and are not meant to kill students," said Lakshmanan.

Police conducted raids on Wednesday night across the district of Saran, where the village school is located.

Raid
They raided the home of the headmistress Meena Kumari, who fled after the children started dying on Tuesday, a senior officer said on condition of anonymity.

"We found two containers filled with insecticide in the headmistress's house along with pulses, vegetables and rice allotted for the midday meals," said the officer, who is investigating the deaths.

Media reports also quoted villagers as saying the use of contaminated, foul-smelling mustard oil for cooking might have caused the deaths.

A state government minister has said the cook complained to the headmistress about the smell of the oil before going ahead on Tuesday.

But the headmistress allegedly dismissed her concerns, the minister said.

Parents have accused the state government and emergency officials of failing to react swiftly to the crisis. One father described how he and other parents carried their children on motorbikes to a hospital because there were no ambulances.

"Four of us [each] carried a child's body on motorcycles and people say there is a government in Bihar," Satendra Mishra told the Indian Express newspaper.

"If there is one, why has no official reached the village yet?"

Video footage has shown emotional and chaotic scenes at one hospital in Chhapra, as children, their limbs dangling and heads lolling, were carried inside. Other children, lying listless on stretchers, were placed on intravenous drips as outside, inconsolable relatives wept.

Bihar chief minister Nitish Kumar announced compensation of $3 373 for each of the bereaved families.