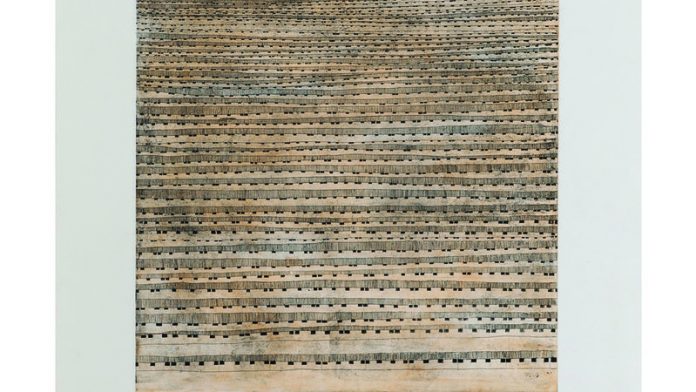 The drawcard is an opportunity to visit Paris for an extended stay – all expenses paid. For the overall winner, there’s the promise of a solo exhibition upon return.

At the awards’ ceremony, on July 17, the event organisers projected a Skype link to the 2012 winner, Erlie Joubert.

In a cutaway we saw Joubert and her family, who travelled overseas with her, enjoying the Parisian summer, among the Europeans. Then she was interviewed live in the Paris apartment at the Cité Internationale des Arts, owned by the bank’s award partner the South African National Association for the Visual Arts (SANAVA).

On Skype Joubert looked content and relaxed. Of course, this was a showcase for the public who came to inspect Absa Bank’s investment in the emergent arts. So one could expect nothing less than the previous winner still basking in her good fortune.

At the award ceremony there was no display of Joubert’s artwork since the occasion was not really about her at all. Her work will be shown at a later date and then the critics can judge whether her time away was well spent.

The concentration on Wednesday night was on the abundance of submissions made to the award, probably the most far-reaching in the country since it is adjudicated across all provinces and includes the works of artists at all levels of skill. There was a radical performance video by Theko Collin Boshomane of Polokwane who, in the work, wandered around in an empty house, in his underpants, tied up with plastic tape.

There was an attempt at a Marlene Dumas-like portrait by Luke Batha of Johannesburg. His work titled Eyes are the Windows of the Soul will not be the first by an artist hoping to learn by emulating the masters. In a contest like this, trends in the international artworld are bound to be rehashed. So the judges’ job, then, is to award works by artists who are starkly original and who may turn out to be the masters of the future.

The Jo’burg printmaker Mongezi Ncaphayi may well be one of those. He is this year’s winner of the Gerard Sekoto Award that is given to a promising artist with an annual income less than R60 000. As a reward for his effort, an etching and spit bite titled Migrant Workers’ Hostel, he will do a three-month residency in Paris. But it will not be his first residency abroad since two years ago he attended an exchange programme at Boston’s School of the Museum of Fine Arts. There he observed processes of abstraction and decided to continue exploring his major theme of migrancy and labour, but through imagery that does not strive to be representational.

About his winning abstract work, that is really just a series of lines and squares representing the monotony of the worker’s hostels, but in a way they is light and full of mystery, he says, “I chose to work like this because I wanted to create a beautiful piece. I don’t like creating artworks that, when you see them, they make you feel very sad.

"From afar, I had to draw you in. And then once you get closer to it you get a sense of what I’m talking about. The work is actually kind of beautiful [although] the meaning behind it is not a good one.”

In an interview at the Absa Bank Gallery, having won the award Mcaphayi admitted that he has gradually begun to work against his instinct to depict the sad reality of people in the street, people like common beggars.

“But if someone buys that art how can they live with it in their dining room? They have this artwork depicting beggars and stuff and at the same time people are eating? So I thought I should have a different approach where you don’t get a sense of what it is from a distance but when you get closer the title will guide you.”

The title is written in pencil at the bottom of the print.

The important and the mundane.
The overall winner, this year is Pauline Gutter of Bloemfontein. Her obelisk has a video embedded in it of a farm procedure where semen is extracted from bulls. On an antique telephone handset you can hear an actor reciting lines originally spoken by real farmers who entered a television reality show – a search for a suitable partner — titled Boer soek ‘n vrou [Famer seeks a wife].

The work is, to a limited degree, monumental but then it has an old phone sticking out of it, indicating a tussle between the important and the mundane. It has feminist undertones although Gutter is loathe to pigeonhole the work. But even she has to admit that the issue of marriage and the woman’s place in the home is central to the work

“For me the question I raise is, does a farmer choose his future wife in the same way that he breeds stud cattle? It’s a trophy, she has to do all these things. In a sense the topic of looking for a role for women and looking for a future wife is based on statement participants in the Afrikaans documentary made.”

Gutter comes from a family of farmers, and she asserts that her mother is a powerful force in the home. In a previous work, created for the Afrikaans arts festival Aardklop Gutter depicted her own mother as a “volksmoeder”, a traditional, hardworking matriarch.

“If I think about my own life, very few men have had the guts to date me,” Gutter says jokingly, about the antagonisms that exist between the genders. The work takes this on with a similar, cruel humour.

The top 100 works will be on public display until August 22 at the Absa Gallery, Upper Ground Level, Absa Towers North, 161 Main Street. Members of the public are requested to bring their ID books along for parking and entry purposes.